Ah, Schtroumphs. Such a classic cartoon. I don't think I watched all nine season of it, but I certainly have fond memories of the earlier seasons - At least through three or four (if not more). It was and still is one of my all time favorite 80's cartoons.

For those of you scratching your head wondering just what the heck a Schtroumpf is, it's French for Smurf. If you're wondering what a V35 is, it's a format of cassette. Put them together, and you get Smurf cassette.

Though it was a highly popular cartoon in the 80's, the Smurfs actually began way back in 1958 when artist Peyo introduced them as a comic series. Over the decades of their existence, hundreds of Smurfs have been created for comics, television and even movies - Each with an adjective based name which essentially dictates their personality.

As is the case with a highly popular franchise merchandise is inevitable, and Smurfs have seen a ton of it. Figures, comics, clothing, food and pretty much every other type of merchandise you can think of. Today we're looking at the Portuguese Movie Viewer from Mupi.

Readers of The Toy Box will remember us covering the Kenner Movie Viewer in detail a few years ago. The Mupi V 35 viewer is similar to this design. It was a rectangular plastic box which you inserted a plastic cassette into, and turned the dial while looking through the viewer. 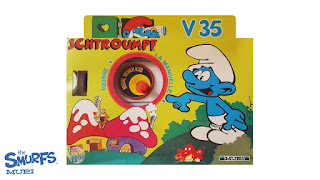 The back of the box advertised, or more accurately listed six different cassettes which you could purchase. Each one featured its own Smurf related story. A fun fact of these cassettes is that they utilized Super 8 film - A highly popular method of film of the era which superseded VHS tapes. Of course being a simple viewer device, none of the cassettes featured any sound. 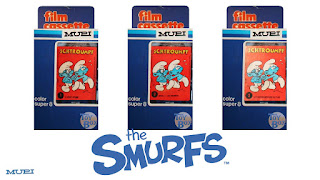 How horrible! The first tape is about a starving giant, and the second about Smurf soup? Yikes! 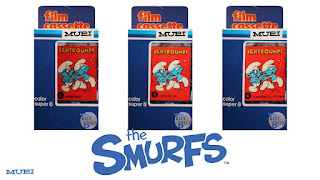 We've seen only a handful of these available via secondary markets in the USA, and fortunately they're reasonably priced considering their age and that they were only available overseas. For $200.00 you can not only get the viewer but all six cassettes - In their boxes. That seriously isn't bad.

Mupi has produced numerous versions of their Movie Viewer, each with different themes and cassettes. Though we won't be going into any others today, we'll be sure to touch on them in the near future.

If you're a child of the 80's, a Smurf fan or both, chances are high you owned at some point in your life owned (or like us still do own) Smurf vinyl records or cassettes. No, these aren't story's which you could read along to, but rather full fledged music albums with original material - Well, except the Christmas album.

Though Smurf albums are still made here and there to this day, it's the ones from Sessions / Starland which hold a special place to most collectors. As we said above, a lot of Smurf collectors owned these albums, and grew up with them as kids. 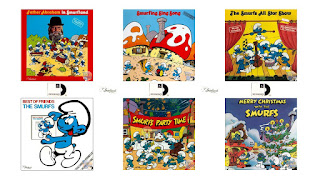 Here's an interesting liner note for the first Smurf Album, Father Abraham in Smurfland - It features a song called Smurfing Beer. We suppose this is due to the fact that alcohol is served somewhat regularly to young kids in some foreign countries. As such, this wouldn't be as taboo a subject as it is in the USA.

These days you can track down the cassette versions of these albums for relatively cheap. We actually purchased all of them for just a buck from one seller about a year ago. Surprisingly all but two of them played without any issue. That's pretty amazing for cassettes which are over thirty years old.

Of course vinyl is also an option - Though it will cost you about five to six dollars an album, and some of them are a little difficult to find.

Unfortunately these were never released on CD, and chances are high they won't ever be. However, there are multiple options for (legally) transferring records and cassettes to digital, and then burning them to a CD. Of course, first and foremost you need to own a copy on either of the two available formats.

Click "HERE" to go back to the home page. For more posts related to this one, please click the labels below.
Posted by The Toy Box on August 06, 2018
Email ThisBlogThis!Share to TwitterShare to FacebookShare to Pinterest
Labels: 1980's, Movie Viewer, Movieviewer, Mupi, Schtroumph, Smurfs