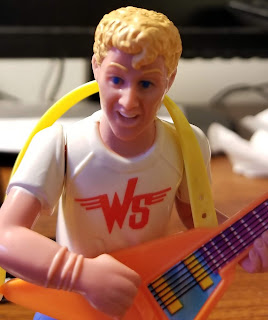 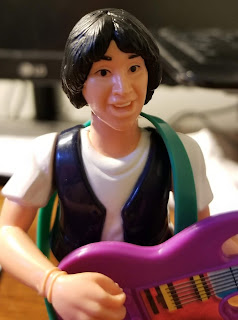 Kenner did a fantastic job with these 1991 iterations of Bill and Ted for their Bill and Ted's Excellent Adventure line. However, the interesting thing to note about the toys is that they were actually released to coincide with the sequel to the film, Bill and Ted's Bogus Journey.

To really give life to your figures, Kenner released the Wyld Stallyns Speaker and Tape Set. The speaker looked like an amp, which with the use of a wire hooked into the back of your figure. Another wire ran from the amp to a Walkman, or other tape player which could support a headphone jack. With the tape playing, you squeeze the legs of the figure together to produce music. Though there were no actual songs on the cassette, rather just riffs of either guitars, drums or piano, you could put any cassette in your tape deck and get the music to play through the speaker as well - After squeezing their legs together of course.

When my figures arrived, they were in somewhat nice looking packages. 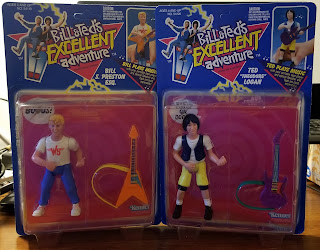 The only flaws, which you can't actually see in the photos was that the bottom of the bubbles were open. Since I was planning on opening them anyway, these were perfect for me. 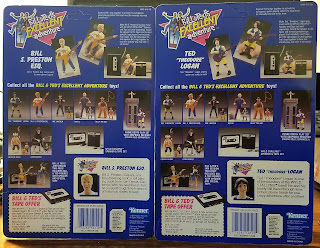 I have to say, I'm really impressed with all of the details Kenner squeezed into each figure. Seriously, take a look at all of the hidden sculpting in the pants which you would miss on a glance. 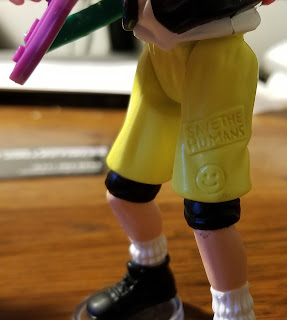 Save the Humans with a smiley face. Love it. Though I am admittedly a little confused by the upside down question mark. 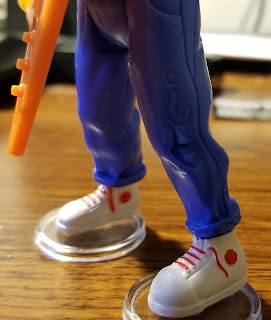 Yes, that's a tick tack toe game etched in Bill's right leg. Peak down at all the details in the shoes too. 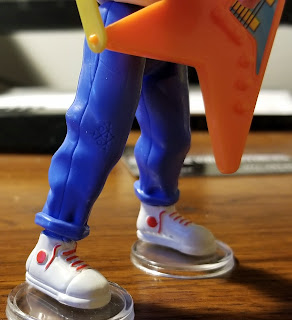 The guitars are probably the most unappealing aspect to the figures, but still, they'll pass as acceptable. 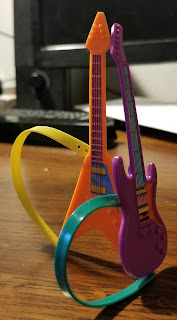 Additionally, the heads on these figures are incredibly loose, while the remaining limbs are the absolute extreme opposite of tightness - To the point you can't move them for fear they'll snap off. For display purposes though, they'll achieve their goal of looking awesome.

I have to say, I'm quite honestly considering tracking down the remaining figures from this line; Abe Lincoln, Rufus, Billy the Kid, Genghis Khan and Grim Reaper. These figures are pretty fun. 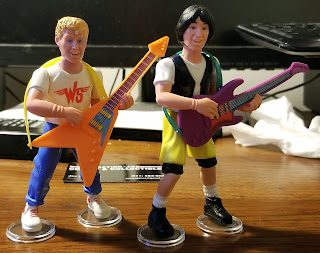 Click "HERE" to go back to the home page. For more posts related to this one, please click the labels below.
Posted by The Toy Box on August 26, 2018
Email ThisBlogThis!Share to TwitterShare to FacebookShare to Pinterest
Labels: 1990's, Bill and Ted's Excellent Adventure, Kenner