Next Stop, The Great Strasburg Emporium

I've been spending a lot of time on the road these past few days, and today wasn't going to be an exception. My travels today took me to The Great Strasburg Emporium. 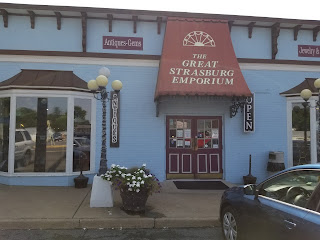 Though this place is massive, I didn't snap as many photos as I could. Mainly because the majority of this 52,000 square foot, 60+ vendor location specialized more so in antiques such as furniture, containers (tin or glass) and other various items you would find at a standard flea market.

However, if one looked hard enough, you could find a nook here and there of toys, records and CD's. Here's what I found that at least intrigued me enough to poke around. 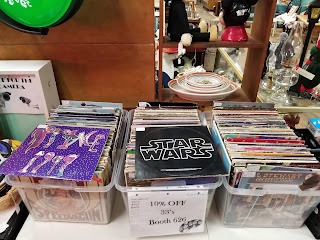 There were a lot of records to be found, and though I didn't spend a whole lot of time digging around in them, I pulled two gems immediately from the first set of boxes I looked through. However, since I had them both already, I left them there. Still, at $12.00 each, they weren't badly priced. 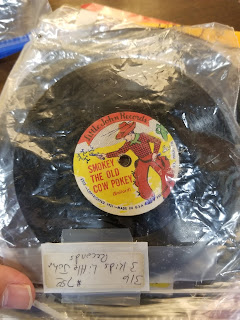 Little John Records were a ten cents budget priced five inch record for children back in the 50's which featured little jingles or Christmas music. I found this bag which contained two inside for $7.50. While this was a bit overpriced for this type of thing, I told myself if nothing else I would buy them so I didn't go away empty handed. 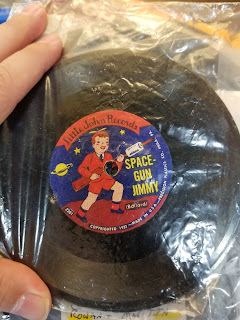 There was no one central location for things because each set of stuff belonged to a certain vendor. As such, you really had to look everywhere to find hidden gems. In my searching around, I found a few sections of toys, but most of them were, sorry to say, junk. 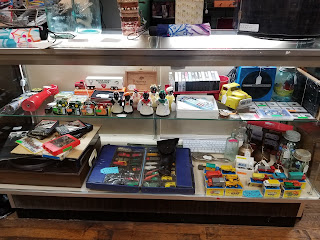 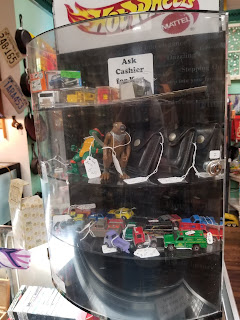 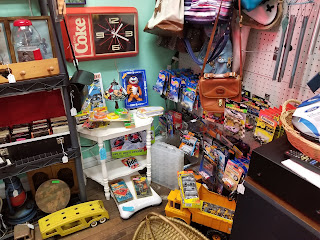 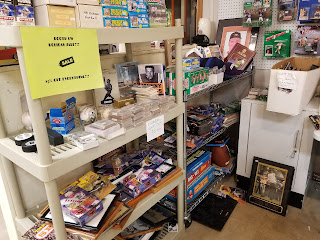 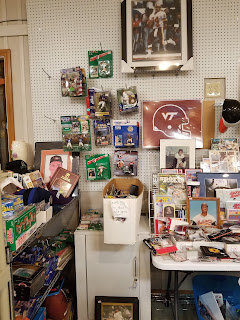 I spent a few minutes digging through these boxes of comics before realizing the majority of them were ten cent throw away's from the 90's, but yet priced at about $1.00 (or more) per book. 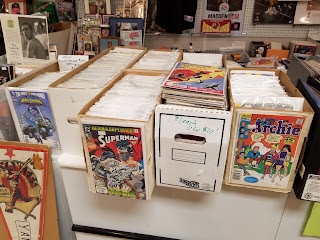 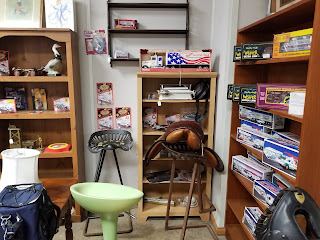 It was when I found this area that I clapped my hands together and said, "Great, now we're talking." It was small, but there were wonderful things to be found.

Had there been a Dick Tracy figure to go with them, I very well may have bought the Police Cruiser and Get Away Car on the back of the table in the below photo. 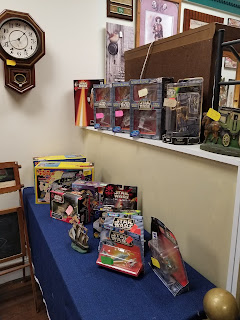 Congo...Not so much. Not my thing. 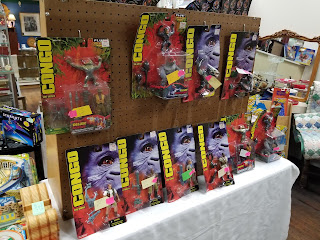 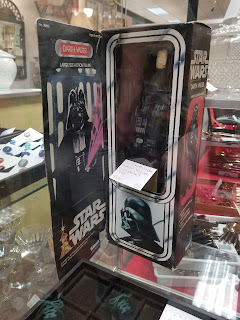 I strayed away from the above section for a while and came across some more stuff... 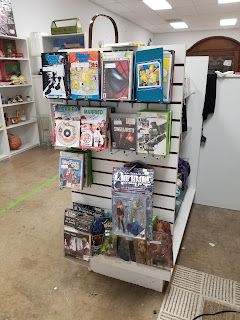 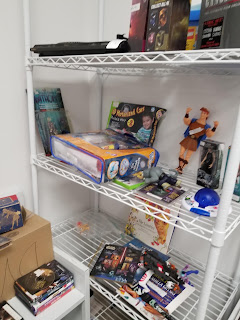 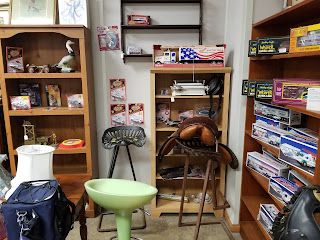 ...Then returned back to finish shooting photos and actually make a purchase. 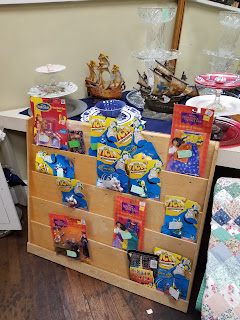 These Beetlejuice figures called to me pretty hard, which is odd considering the toys were never on my radar. I think I was honestly just getting itchy to buy something so I wouldn't leave empty handed. 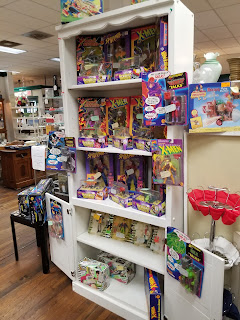 Then I turned around and saw...C.O.P.S.! Mint in packages no less. 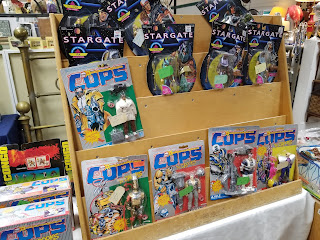 I walked away and took another lap to really consider things. I wanted to buy something, no doubt about that, but I was either going to take the plunge and toss some serious cash at C.O.P.S. or cheap out and buy the more budget friendly, $10.00 each, Beetlejuice figures and vehciles. 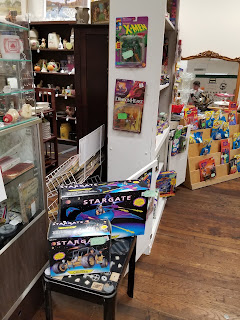 As I circled back to the table to make a decision, I noticed this pretty cool Joker cookie jar in a cabinet. It didn't intrigue me beyond snapping a photo. 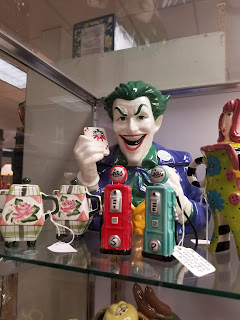 So, what did I end up buying? Well, I compromised. After looking up a few C.O.P.S. figures on ebay, I found that it would be foolish to pay the price the seller was asking for some of them, but not all of them.

I ended up getting the leader of the C.O.P.S. team, Bullet-Proof. 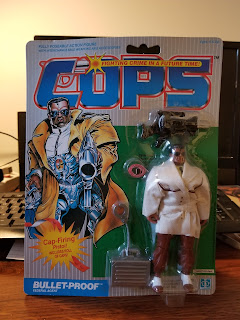 In searching for him on ebay, I found two things out. 1) As of this writing there are zero Bullet-Proof figures available for purchase / bid. 2) Mint on card figures sell for between $90.00 and $150.00. As such, the asking price of $50.00 on this one was rather reasonable. It pretty much cemented the deal for me. 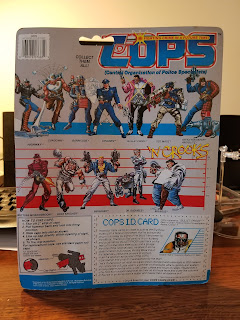 I don't know that I'm going to rip this one off the card. While I am a fan of opening my toys, something tells me this would be very foolish in this case. I may end up nabbing a Zoloworld protector case and leaving it for display purposes in the package.

I also grabbed two Beetlejuice figures. Why two? Because honestly it would take the two of them to make the Bettlejuice figure I want. 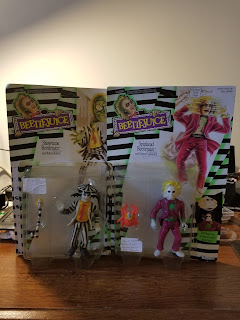 See, the shtick behind these figures from Kenner was that the heads came off to reveal smaller heads inside. Additionally, the larger heads could be interchanged between all the other figures. As such, I don't feel guilty removing the head from Showtime Bettlejuice (above photo on the left) and replacing it with Spinhead Beetlejuice (above photo on the right) to make a normal looking Beetlejuice in his black and white striped suit. 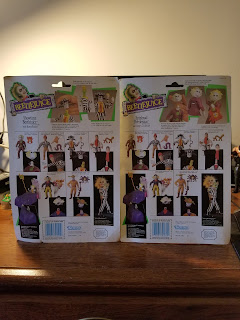 I also picked up the Phantom Flyer, just to have something to put the figure on. Though I really wish it was the Vanishing Vault playset from the line as this would be my ideal way of displaying him. 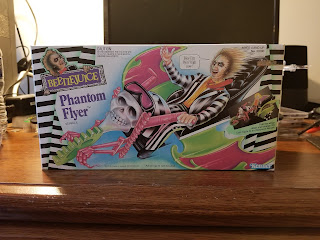 As you can see on the front and back of the box, even Kenner said, "Change the heads around on the figure to make a normal Beetlejuice figure." Wonder why they never bothered to just release a figure like this. 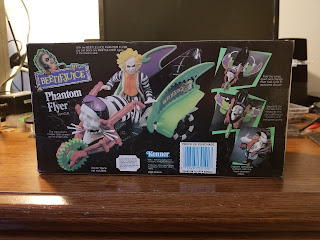 In hindsight I wish I would have gone ahead and grabbed the rest of the C.O.P.S. figures, even though a few were overpriced. I also wish I would have nabbed those Dick Tracy cars. Oh well, know when to say when, right? At the very least, I may have to track down a Big Boss to sit side by side with Bullet-Proof. I might also try to track down the Vanishing Vault for Beetlejuice so I can display him how I envision him. I probably won't open anything until I make up my mind.

Click "HERE" to go back to the home page. For more posts related to this one, please click the labels below.
Posted by The Toy Box on August 15, 2018
Email ThisBlogThis!Share to TwitterShare to FacebookShare to Pinterest