Retro Spins: U2 - The Joshua Tree

I've never been a fan of U2. Just couldn't ever seem to get into them, and I don't know why. Something about the band, as people, rubs me the wrong way, and I think it stops me mentally from allowing myself to enjoy anything they put out. I wanted to see if I could change this, so one day when I was at a local used CD shop, I grabbed everything U2 I could find - About nine albums. Today, I begin my adventure into their world.

The Joshua Tree seemed like the most appropriate album to being with. Mainly because it's the album the band is not only most notable for, but the one which I recognize the most tracks from.

It's credited with being the first album released on CD, vinyl and cassette all on the same day. It became the number one album in ten countries across the world, and remains the bands most successful album to date with over twenty-five million copies sold. 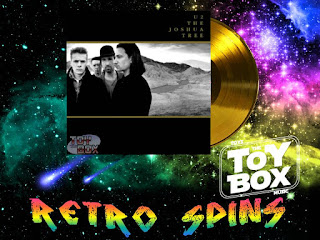 After making my way through The Joshua Tree, I find myself still not a fan. I think the underlying problem is that, overall, I just don't like the style of music U2 produces. I can't even honestly explain it. I've written and deleted about three or four sentences trying to.

It starts out okay with Where The Streets Have No Name, I Still Haven't Found What I'm Looking For and With Or Without You. While I'm by no means the biggest fan of these songs, in general, I can sit through them occasionally. From there, as the album goes off into uncharted territory for me, I find myself being less and less interested in it with each passing song. My interest piqued slightly with track ten, Exit, but not enough that it made me want to add the song to my iTunes or iPod shuffles.

Overall, I just don't see myself being a fan of U2. A downer considering I have so many CD's from them at this point. I want to like them, mainly because they are such a staple of the 1980's, but I just don't. I can't get into them. The worst part about all of this, is that I still don't fully know why I don't like them.

Click "HERE" to go back to the home page. For more posts related to this one, please click the labels below.
Posted by The Toy Box on December 07, 2021
Email ThisBlogThis!Share to TwitterShare to FacebookShare to Pinterest
Labels: 1987, 80's Album Review, 80's Music, 80's Music Review, Music of the 80's, Retro Spins, The Joshua Tree, U2