I know I promised more posts today, but holy cow, I was not expecting the bigness that this Christmas was to be. It was an incredibly full day that left no room for Blogging.

Everything kicked off with the kids making a breakfast pizza for us all. 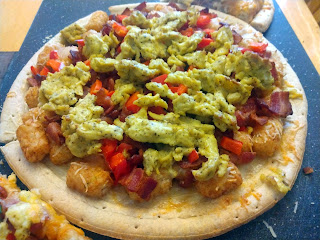 The pie started with a layer of queso cheese spread across the curst. This was topped with tatter tots, bacon, red peppers, cheese, and eggs. When it was all baked up, they served it with a side of salsa. It was really delicious, which was surprising to me because I am not a fan of bacon.

After breakfast, we enjoyed some time opening our stockings. 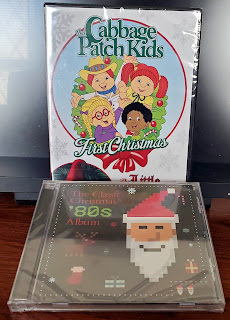 Stockings are traditionally stuffed with assorted small gifts and candy. Mine was nothing short of this as well, but I only photographed the two biggest highlights from it (above). 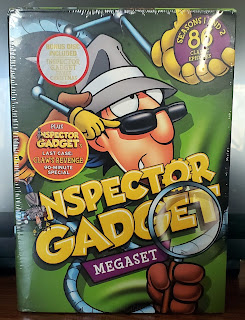 After opening these, we decided to call our respective family members, and this included me calling my mom. We have a tradition of opening our gifts to each other together over the phone. This year I got this awesome complete collection of Inspector Gadget. 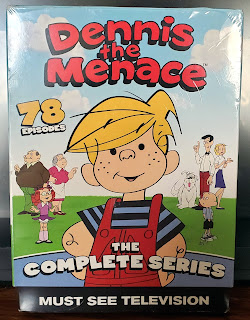 The kids then wanted to open the presents they had under the tree, and this is where things got a little overwhelming. How to put this...
When I say kids, I mean her son and his wife. The two of them met when going through a difficult period in their lives which saw them both briefly homeless. They both have severe mental disabilities, and while they've managed to get themselves stable, they don't have much. Well, my girl decided she was going to rectify this in 2021, and this resulted in her buying so many gifts that it took them a whopping three hours to open. Mind you, these were just the gifts from her to them. I didn't even bother putting what I got them under the tree because there wasn't any room.
They gave me this awesome complete series of the 80's Dennis the Menace cartoon. Love it! My classic cartoon collection is coming along nicely.
By the time they got done opening their gifts it was around 1:30 PM. Needing a little down time and break from everything, we decided to all sit down and watch The Matrix: Resurrections on HBOMax. 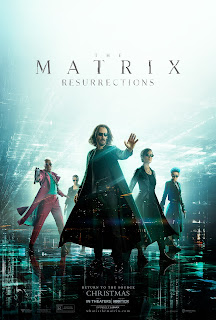 It honestly wasn't bad, though it's definitely one of those movies you need to pay complete attention to if you want to keep up. There's room for a sequel by the end of it, and I can honestly say that it was good enough that I would check that out.
What I particularly liked about it was how it was handled as a whole. It paid homage to the original, building on it at the same time, while not just rebooting it. There's a reason why things are the way they are, and it works well. Would I have liked to have seen Lawrence Fishburne and Hugo Weaving in their respective roles? Absolutely. However, their recasting works well, and again, there's a reason for it.
After the flick, I brought my presents down for the kids and gave them to them to open. I then sent them on a scavenger hunt around the house with each envelope having a clue to the next. Inside each one was a gift card to a fast food joint.
For dinner I stepped into the kitchen to show my stuff. The end result was bone in prime rib, a recipe my mom used to make called those potatoes, whole roasted carrots and fresh baked rolls.

After letting dinner settle, I busted out the finale, these two delicious cakes that I made the day before. 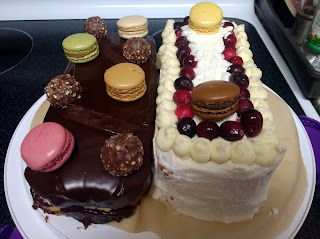 With everyone miserably full, we called it a day, sending the kids on their way. My girl and I finished the night off by calling my brother and opening the gifts we got for each other over the phone. As usual, my brother went overboard, being very generous. 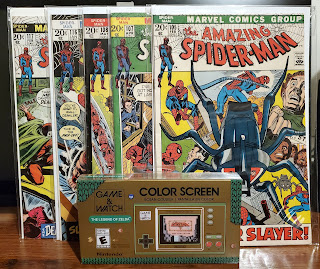 He filled five of the seven gaps in the issues I was missing form 100 - 199 in my Amazing Spider-Man collection. Just two more to go, and I'll have a consecutive run from issue 86 - 441. Not bad, if I do say so myself.
Lastly, my brother got me the new Game & Watch Legend Of Zelda. He got me the Super Mario Bros. one last year, and I have to admit, I really dig these things.
I really hope that Nintendo keeps going with this series. There are so many classic games from the NES that could be released this way. This particular gem has both the classic NES games, The Legend of Zelda, and Zelda II: The Adventure of Link, as well as the original Gameboy game, The Legend Of Zelda: Link's Awakening. As an added bonus, it also has a classic Game & Watch style game called, Vermin.
My girl and I still have gifts for each other. However, we are both so incredibly exhausted at this point. We'll have to get around to these another day, which is fine by me. I love drawing out Christmas as long as possible.
Until then, I hope you all hade a Merry Christmas! God bless.

Posted by The Toy Box on December 25, 2021
Email ThisBlogThis!Share to TwitterShare to FacebookShare to Pinterest
Labels: Christmas 2021