Though they never became a major success in the United States, the all girl led, The Runaways, shouldn't be forgotten. With the likes of Cherie Currie, Sandy West, Jackie Fox, Lita Ford and Joan Jett, they were anything but talent-less.

The initial iteration of the lineup was a trio, featuring Joan Jett on lead guitar, drummer, Sandy West, and Micki Steel, better known for her work with the other all girl group, the Bangles. Steel served double duties on bass / lead vocals, but was soon fired. Though there are several stories out there as to why she was let go, her own account was that she refused sexual propositions from their manager, and for calling their single, Cherry Bomb, "Stupid".

Peggy Foster would join as the new bassist, and Joan Jett shifted to rhythm guitar when Lita Ford was brought in as lead guitarist. Foster left after just one month, but no official reason appears to have been given as to why.

Both Cherie Currie and Jackie Fox would join the group in 1975, completing the classic lineup. Currie was just fifteen years old, and their anthem, Cherry Bomb, was written specifically for her audition with the band.

A life of rock and roll excess followed as the band released their first and second albums, respectively the self titled, The Runaways (1976), and Queens Of Noise (1977). This lead to world tours, fame, fortune, and fights. Said fights were said to be provoked by their manager and record label, and were conducted as "divide and conquer" tactics to keep the members in line, and under control. This ultimately came to a head in 1977, with Currie and Foster quitting the band.

The Runaways continued on with their third album, also released in 1977, Waiting For The Night. Joan Jett would step in to fill the roll of vocalist, in addition to her lead guitar work. Vicki Blue would join as bassist. This new lineup would remain in place through their fourth and final album, 1978's, And Now...The Runaways.

Though there were talks of a reunion a few years ago, much like the drama within the band in the 70's, this reared its head again, tainting the possibility of this happening. Lita Ford blames Joan Jett and her manager, and Cherrie Currie blames both Ford and Jett for not being able to see eye to eye. But, considering The Eagles and Guns 'N Roses managed to pull off successful reunion tours, I wouldn't count The Runaways out. Money talks, and changes minds quickly. 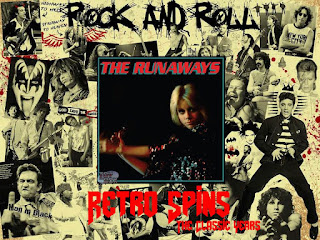 Until then, let's jump in our wayback machines, and head to 1976 for the debut album that started it all. The Runaways self titled album, The Runaways, featuring the classic lineup of The Runaways, singing songs written by The Runaways.

Sorry, I had a moment of wanting to be annoying. Did it work?

As I hit the play button, I was greeted by the only song I know from the quintet, Cherry Bomb. It's a classic rock anthem, and one that many people know and love. But is it amazing? No, not really. It's just okay. I think what makes it better is how iconic it is, not that it's by any means a masterpiece.

Unfortunately, I can sum up the rest of this really quickly. The rest of the album is just there. Nothing stands out. It's hard rock, for sure, but it's just not....good. In fact, now that I think about it, I kind of have to agree with Micki Steele. Even Cherry Bomb is kind of stupid.