Retro Spins: Pat Benatar - In The Heat Of The Night

Pat Benatar exploded on the scene in 1979, competing with the predominantly male dominated hard rock scene, clawing her way to the forefront to become one of music's leading ladies of the 1980's. With an explosive list of hits, multiple platinum albums, and several Grammy Awards, she is anything but just your average singer.

Inspired one even after taking in a Liza Minnelli concert, she decided to pursue a career in music. Quitting her bank job, she shifted her focus to the night club, The Roaring Twenties, where she worked as a singing waitress. It was here where she met Phil Coxon, and together they formed Coxon's Army.

Benatar had married her high school sweetheart, Dennis Benatar in 1973, and when he returned from the army in 1975, the couple moved to New York so that she could continue her pursuit of music. During this period, she would perform regularly at Catch A Rising Star. Between 1977 and 1978 she would continue to perform at various venues, even recording commercials for Pepsi-Cola. However, it would be her headline at New York City's Tramps club in 1978 that would prove to be the opportunity she needed. The show was heard by representatives of several record labels, but it would ultimately be Terry Ellis of Chrysalis Records who would sign her. Though she would divorce her husband shortly after, she would keep his last name.

Her debut album, In The Heat Of The Night (1979) would serve as her breakthrough album, reaching number three in Canada, and paving the way for future albums, which seemingly only got bigger and better. Throughout her career, she was able to achieve a unique sound, combining both hard rock and pop.

Pat and her guitarist, Neil Giraldo would soon start dating, and by 1982 were married. To date, they remain together, and continue to tour together. A true love story that is so rare these days.

Over her four decade career, Pat Benatar has released twelve studio albums (1979 - 2003), and over twenty compilations of various formats (cassette, CD, VHS, etc.). Though I think it's fair to say her main popularity were her albums released between 1979 and 1991. Yes, sadly, she became another victim of the grunge era, losing popularity in the early 90's as the new sounds of music quickly dominated airways. Despite this, she continues to remain active, touring frequently. 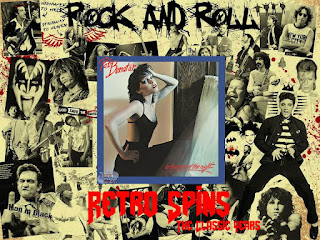 Today, I'm going back to 1979 to revisit that first album which paved the way to her rock-stardom, In The Heat Of The Night.

The album punches you in the face with one of her biggest hits of all time, Heartbreaker, and from there transitions into a subpar rendering of John Mellencamp's I Need A Lover. From there, while it delivers decent tracks, nothing really stands out as amazing by any means.

It wasn't until the tail end of it all, songs seven and eight, X-Rated and Don't Let It Show, that I got interested again. Even then, these are far from "hits". Overall, it was a bit disappointing that for how popular Pat Benatar is that this album was just...Well, adequate. I expected more.

This by no means taints my opinion on her as a singer. She has a ton of hits, and I like a lot of them, if not all of them. I was just hoping to find more to add to my shuffle list than what was already there, which I suppose I did with the two aforementioned tracks.

Posted by The Toy Box on September 15, 2021
Email ThisBlogThis!Share to TwitterShare to FacebookShare to Pinterest
Labels: 1979, 70's Album Review, 70's Music, 70's Music Review, In The Heat Of The Night, Music of the 70's, Pat Benatar, Retro Spins