Pretty much everything I know about this movie can be found on the album cover. John Cusack holds a boom box over his head and plays In Your Eyes by Peter Gabriel. 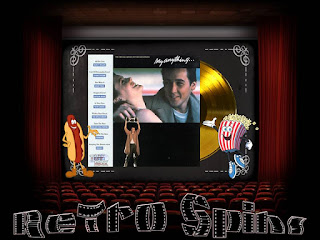 Lloyd Dobler wants one thing for high school graduation: a date with Diane Court. She's a beautiful, brilliant scholar who's just landed a fellowship to study in England - all of which makes her way out of Lloyd's league. At least that's what his friends and her father believe. Lloyd, however, believes in love, pure and simple. So he sets out to capture Diane's heart and in the process they both learn about the happiness and heartaches of falling in love.

SAY ANYTHING is a funny, poignant, joyous celebration of first love. It features two of today's most exciting young actors: John Cusack ("The Sure Thing") and lone Skye ("River's Edge"). Together they create an on-screen chemistry that vibrates with passion, humor and charm. A love that defies all logic is sometimes the most logical thing in the world. - Back cover of the original VHS

A movie from 1989 means one unfortunate thing in my book. It's right in that range where 80's music got really, really bad. For those of you who don't know, that, for me, is music which came between 1987 and 1989. As such, I was really preparing myself to not necessarily enjoy this album.

It had a few high notes to offer. The live version of Living Colour's Cult Of Personality was raw and powerful. I also can't hate on Peter Gabriel's In Your Eyes, even though the track had been available since 1986 on his So album.

Beyond these two tracks, the album was rather forgettable for me. I didn't hear anything that really grabbed my attention. It was just a group of random songs, and not necessarily very good ones at that.

Click "HERE" to go back to the home page. For more posts related to this one, please click the labels below.
Posted by The Toy Box on April 21, 2020
Email ThisBlogThis!Share to TwitterShare to FacebookShare to Pinterest
Labels: 1989, 80's Album Review, 80's Music, 80's Music Review, Music of the 80's, Retro Spins, Say Anything...