All I can remember about the film, Less Than Zero, is it's the movie where Robert Downy Jr. was turning tricks for drugs. Beyond that, it was a pretty forgettable flick. Hopefully the soundtrack will have a bigger impact. 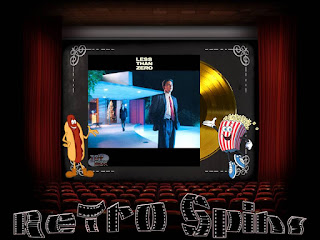 Julian (ROBERT DOWNEY, JR) - has everything money, style...and a habit he can no longer afford. Faced with debts that he can't pay he drags his friends into a new world filled with drugs, danger and violence.

His friend Clay (ANDREW McCARTH) will do just about anything to help but Julian's going down the tubes so fast he might just take both clay and his girlfriend Blair (JAMI GERTZ) with him. In a world of drugs, power and money sometimes you can have anything you ever dreamed of except - the way it used to be... - Back cover of the original VHS

The album draws in some of the 80's biggest talent via the likes of Aerosmith, Poison, LL Cool J, Glen Danzig, Slayer, Public Enemy, Joan Jett and Bangles to provide an eclectic album of rap, hard rock and a splash of metal. If it were being judged solely on this, it would get an A+ all the way.

Unfortunately, even established artists can deliver duds, and that is sadly the case for a fair amount of the album. Aerosmith's Rocking Pneumonia And The Boogie Woogie Flu feels like a throw away song for the band. Something that wasn't necessarily a good fit, style wise, for the band's 1987 album Permanent Vacation (released the same year as Less Than Zero), but good enough if someone wanted to pay them a couple bucks for (or a million) to throw on a soundtrack so it didn't go to waste.

Poison's cover of Rock And Roll All Night left me wishing the producers of the album had just paid Kiss whatever they wanted to use their version. Poison as a whole isn't terrible, but their flamboyant version of the song does it zero justice. Less than zero actually. See what I did there?

Slayer's, destroyed, version of In-A-Gadda-Da-Vida is plain awful. It takes everything that was special about that original seventeen minute track and condenses it down to a three minute nineteen second noisy mess. I say this for Poison as much as I say it for Slayer - Established bands don't need to make covers of other people's music. Especially when said music is already a classic of sheer perfection. For starters, I expect more from bands such as this. Secondly, there's no reason to mess with the classics. They're classics for a reason, and typically can't be improved upon.

Oddly enough, as someone who doesn't necessarily prefer rap music, that's actually the aspect of this album I found myself enjoying the most. LL Cool J's Going Back to Cali and Public Enemy's Bring The Noise grabbed my attention pretty hard, and had me digging them. I also have to take a step back at this point because I have to admit I really liked Hazy Shade Of Winter by (The) Bangles. In my defense I did say "typically can't be improved upon." Not that they couldn't be.

This, however, is just three out of eleven songs. Not a good ratio when you break it down. Percentage wise, that makes this album pretty much a dud. At the very least, poor. Mind you, that won't stop me from grabbing the three tracks I did like for my 80's mix in iTunes.

Click "HERE" to go back to the home page. For more posts related to this one, please click the labels below.
Posted by The Toy Box on April 28, 2020
Email ThisBlogThis!Share to TwitterShare to FacebookShare to Pinterest
Labels: 1987, 80's Album Review, 80's Music, 80's Music Review, Less Than Zero, Music of the 80's, Retro Spins