With as many years as Marvel Comics has under its belt, sometime in that long expansive history, you're going to falter. That's pretty much what happened in September 1991 when Marvel joined forces with the NFL and released the one-shot NFL SuperPro! 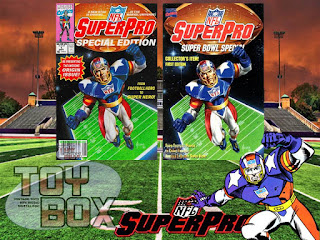 Phil Grayfield used to be a football pro until an injury brought his career to a halt. Now as a sports reporter, Grayfield finds himself interviewing a chemist who has created a football uniform which is impervious. However, the interview is cut short when a group of thieves interrupt, and set fire to the chemist's home.

Grayfield accidentally knocks over the chemicals, and they combine with valuable souvenirs and the reporter, making the man invulnerable. With the aid of the most unusual team; the penny shooting Allmighty Dollar, the genius Asian, Calculator, the fat guy with the impervious stomach, Girth and a super speedster, Streak, Grayfield decides to fight crime.

Yes, it really was as bad as it sounds.

In September of 1991, Marvel not only unleashed this abomination through comic shops, but also football stadiums across the country. They then followed up with a monthly ongoing series.

I have three theories for why they would do such a thing:


Whatever reason it was, right on the heels of the one-shot, Marvel launched issue number one in October 1991. Throughout its minimal twelve book run, the series dragged along with it the likes of Captain America and Spider-Man. However, this didn't seem to do much, if anything at all, to help book sales. 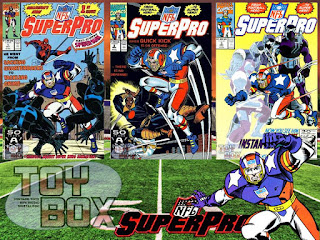 Spider-Man appears in issue number one, shown above. 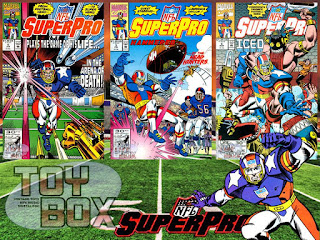 The series has been cited as one of the worst in Marvel's history by comic book fans and sports reporters, often being ridiculed for its poor plot points, corny one liners and stereotypical characters. However, it's also been boosted to a pop culture cult status for the exact same reasons. SuperPro is so bad, he's apparently good. 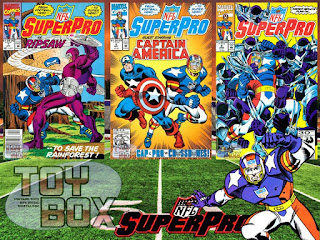 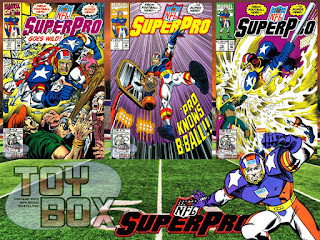 Since most of the books can be found in quarter and dime boxes, you can literally collect the entire series for under ten dollars. Though the first issue and one-shot will set you back a buck or two a piece.

Click "HERE" to go back to the home page. For more posts related to this one, please click the labels below.
Posted by The Toy Box on April 20, 2020
Email ThisBlogThis!Share to TwitterShare to FacebookShare to Pinterest
Labels: 1990's, Comic Books, Marvel Comics, NFL, NFL SuperPro, SuperPro