I'm by no means a foodie, but I'm definitely a bit of a snob when it comes to eating. I won't eat fast food. I feel like at my age my pallet should be far more refined than that of a three dollar burger. I also have a major aversion to eating leftovers. It's the food I didn't want the day before. More so because of the latter, I have grown quite accustomed in my adult life at having a variety of food, something different every day.

Unfortunately, as we all face the ridiculous mandatory transition to a communist country lock down, I am forced to make groceries stretch. Gone are the days I was freely able to go to the grocery store on a whim, shopping as frequently as I so desired. Now I have to plan meals. Make one trip every few weeks and stretch things out. This means, gasp, eating leftovers.

Despite this drastic turn of events, I've found ways to help ease the suffering. Yes, I'm still having to eat leftovers, but I'm transforming them here and there.

Now, I know this is a toy blog, but desperate times to occupy oneself means utilizing every tool at ones disposal. This means my site may turn into a garbage dump throughout all of this nonsense for no other reason than to stay productive. Bear with me. Also, if you want toy related posts, scroll down below this one. The one I posted earlier today should scratch that itch nicely.

A few nights ago I made a pan of spaghetti, because you can't exactly make a small batch once you get done making the sauce - Which admittedly took no further effort than opening a jar and dumping it out. It's not my ideal method for making red gravy, but it did in a pinch for a quick meal on a day I otherwise wouldn't have bothered making anything. For good measure, I also threw in a tray of chicken nuggets and zhoosh'd up the pasta with ample grated Parmesan and Reggiano cheeses. The end result was this masterpiece. 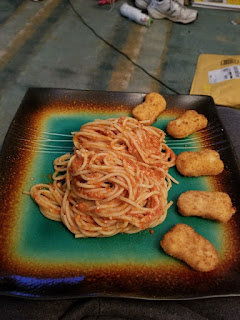 The nuggets didn't make it to the leftover stockpile, so I ate on just the spaghetti for a few days. For one meal I had a follow up bowl. For another, I threw some in a large flour tortilla with grated cheddar cheese and dropped that on a hot skillet to make a crispy spaghetti wrap.

However, at this point, I was over it. The pan sat in the fridge for a couple more days before I finally decided I really shouldn't let it go to waste. As I reluctantly scooped some in a bowl to nuke, I had a fascinating idea.

I dumped the pasta back in the pan and pushed it off to one side. In the newly open space I poured in some heavy cream, sprinkled in some Cajun seasoning, salt, pepper, a little more Parmesan and Reggiano cheese, as well as, some diced cilantro. 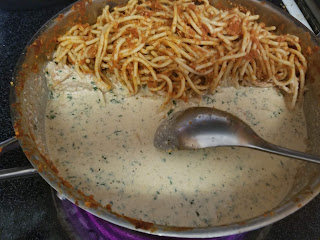 Giving it a quick stir, I positioned the pan on the burner so that it would heat up the liquid, but not the pasta. Once it was nice and bubbly, I stirred it all together. 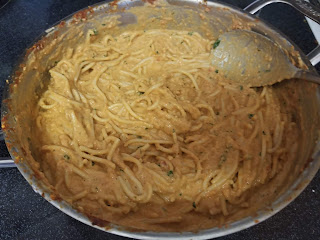 Boom! Tired spaghetti instantly transformed into a piping hot pan of Cajun pasta. In hindsight, I probably didn't need to add the additional cheese, as it really overpowered the entire dish. I also wish I would have remembered the jar of sun dried tomatoes in the fridge, as those would have given it some needed texture. Oh well.

Transformed, it was bearable to eat once again. The downside is I now have a pan of this to eat for a couple more meals before it's gone.

Here's hoping we get back to normal soon.

Click "HERE" to go back to the home page. For more posts related to this one, please click the labels below.
Posted by The Toy Box on April 10, 2020
Email ThisBlogThis!Share to TwitterShare to FacebookShare to Pinterest
Labels: Leftover Makeover