Want to spend a ton of money on a non articulated set of six inch action figures? Then look no further than MediCom's The Rolling Stone line from 2006. Sadly, you won't find the whole band present. Rather just Mick Jagger and Keith Richards.

Not being a big fan of the Stones myself, I have to be honest and admit I have no clue which era these outfits come from. Google searches all came up in vain. Then again, when you're typing things such as Mick Jagger blue outfit and Keith Richards white shirt, you don't tend to get much help. 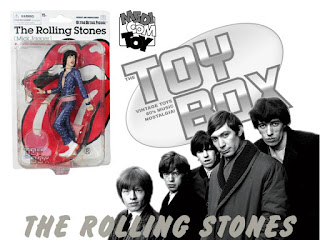 For what it's worth, the figures look good. Personally speaking though, I'm not a fan of action figures with zero articulation and frozen poses. Even if it's simply for display purposes, I think companies such as Sideshow and SH Figuarts have proven articulation to be somewhat of a necessity in this day and age. These 2006 figures get no pass in that regard. 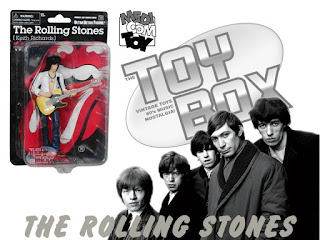 Hidden behind a cardboard cover were two twelve inch versions of the same figures. The only difference was that these actually got a touch of articulation. On these, the heads swiveled, the shoulders, elbows and wrists had joints as did the top of the legs and knees. The clothing was also fabric vs. the plastic used for the six inch versions. 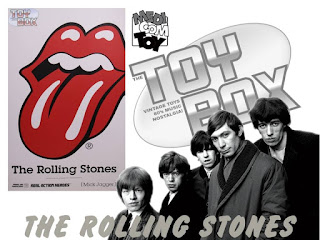 Overall, the entire line came and went in the blink of an eye. This probably wasn't helped by the fact it was limited to exportation from Japan. This meant very few sources were available for buyers overseas. These were the kind of pieces you would walk past at places such as Otakon, and do a double take because you never knew they existed. 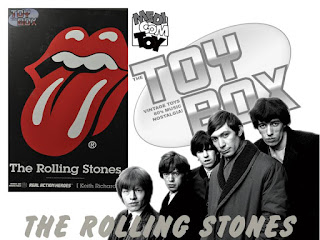 Between their overall limited nature, and their overseas distribution, these figures are not cheap. The carded six inch figures can sell for as much as eighty dollars a piece. Meanwhile, the twelve inch boxed versions are going to wallop your bank account at two hundred fifty dollars or more. To make matters worse, even with the aid of ebay, they're still incredibly scarce.

Click "HERE" to go back to the home page. For more posts related to this one, please click the labels below.
Posted by The Toy Box on November 11, 2019
Email ThisBlogThis!Share to TwitterShare to FacebookShare to Pinterest
Labels: 2000's, MediCom, The Rolling Stones