When I first heard Freddie Mercury's album (Mr. Bad Guy), back around 1991, it didn't impress. In fact, it was quite awful. However, with the release of The Great Pretender (1992), which featured a remixed version of the majority of the tracks, I've come to appreciate this album more. As such, the album has remained relatively "shelved" in my collection in favor of the aforementioned "updated" version. 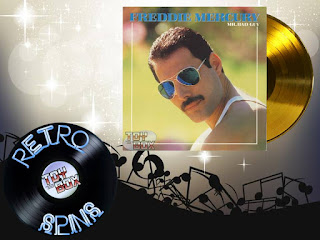 I gave the 1985 album a listening session for today's Retro Spin, and I have to say, it's grown on me all the more in light of recent Queen activity. Keeping in mind I write these posts far in advance, and to put it into perspective, this listen comes about two weeks after the release of Bohemian Rhapsody in theaters.

It's by no means Freddie's greatest work. In fact, for me, it ranks up there with Hot Space from Queen. However, this is because of the actual music style. It's too club friendly. Heavy bass driven tracks, geared more towards dancing. Lyrically, these are some great tracks. They just aren't mixed well with the actual music style. I dare say, if Queen were to reunite and re-record the actual music, this could be one of their best albums.

With that said, there are still gems to find here. Man Made Paradise and Love Me Like There's No Tomorrow stand out as classics for me. Overall though, I would still recommend the 1992 The Great Pretender from Freddie over Mr. Bad Guy.

This is proof that sometimes going solo isn't necessarily the best career move for a singer. Sometimes you need your band mates to tell you, "No, this isn't good. Let's try it this way," or sometimes even, "Let's move on from it." As great as Freddie Mercury was (is), his work with Queen will always be far superior to that of his solo work because within the band there was that push pull mentality, which (for my money) always resulted in the best.

Click "HERE" to go back to the home page. For more posts related to this one, please click the labels below.
Posted by The Toy Box on November 26, 2019
Email ThisBlogThis!Share to TwitterShare to FacebookShare to Pinterest
Labels: 1985, 80's Album Review, 80's Music, 80's Music Review, Freddie Mercury, Mr. Bad Guy, Music of the 80's, Queen, Retro Spins