It honestly shocked me to find the classic Dancing in the Streets from David Bowie and Mick Jagger was only released on vinyl in 1985. I thought for sure this would be on one of the two's solo albums, but no. Single, or nothing.

The track was recorded by the duo as a contribution to Live Aid, and was completed, video and all, in under twenty-four hours. Another interesting fact about the song, is that the band playing the music is The Jam - Another band I came to find out who my favorite song from was also only released as a single. For the sake of closing the loop, that would be their 1981 single, Absolute Beginners, which would later be used on the 1997 soundtrack for Grosse Pointe Blank. 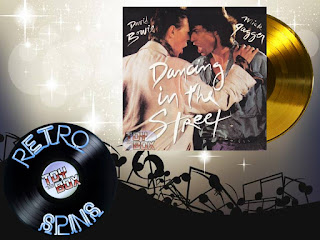 It's sad, thanks a lot in part to Family Guy, that these days the song is considered to be one of the worst things to come from 80's music. I guess it's just one of those, you had to be there moments, where you could enjoy the tune as it was intended to be - A fun duo between two of rock's greatest musicians. And, it is fun. It's catchy. It's got a beat you could dance to, and hey, to boot, it's even just good - You know, the biggest thing that matters in the long run.

For my collection, I opted just the forty-five as I just wanted the "original" version of the song. Of course, if you're looking to get this track in crystal clear digital form, you can look to the 2007 released The Very Best of Mick Jagger or the 2002 released Best of Bowie.

Click "HERE" to go back to the home page. For more posts related to this one, please click the labels below.
Posted by The Toy Box on November 12, 2019
Email ThisBlogThis!Share to TwitterShare to FacebookShare to Pinterest
Labels: 1985, 80's Album Review, 80's Music, 80's Music Review, Dancing in the Street, David Bowie, Mick Jagger, Music of the 80's, Retro Spins