A Visit To Cool And Collected Headquarters

In a recent post, Brian over at Cool and Collected stated he was looking to offload some items which had been shifted from his collection to storage. Since we live so close to each other, it was a perfect opportunity to reach out for a visit to his home, aka, The Cool And Collected Headquarters, to see if there was anything of interest.

What I loved about Brian's house was the sense you got the moment you walked in the door. You knew you were in a collector's home. Displays were established in numerous rooms, neatly set up on shelving. Brian's main focal point seemed to be his den, which houses his current treasures of interest. He was happy to not only take me through it, but also let me snap some photos.

For those of you who have been to his site, you know Brian's main focal point of collecting is Batman and Marvel characters, pre 1970's. He loves the unique pieces that you won't find every day, and its these that he displays predominantly on numerous shelves and display cases. 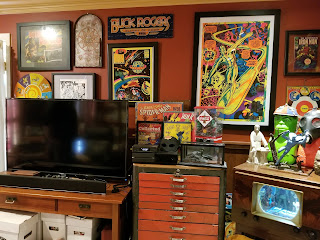 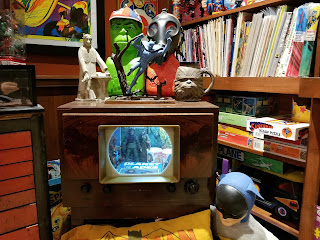 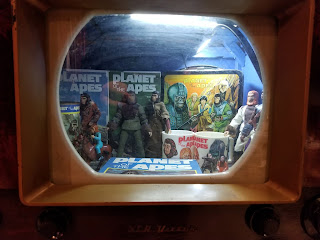 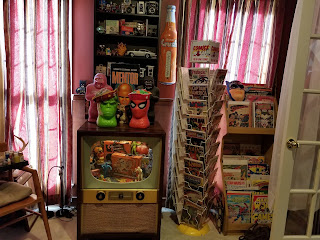 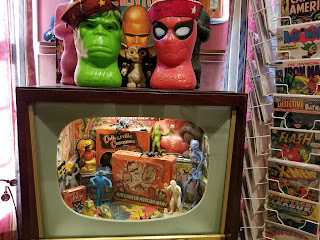 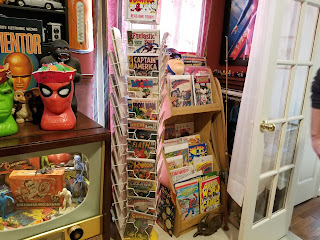 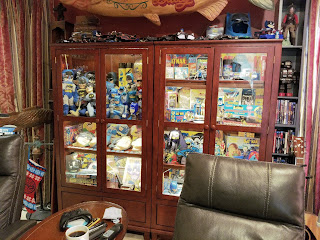 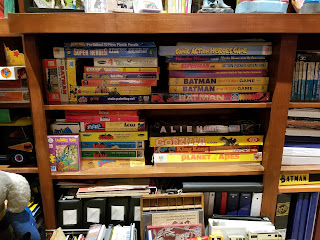 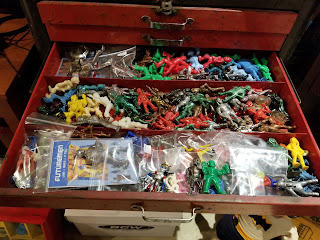 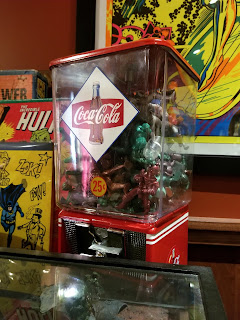 From there, we took a trip to his basement, which the walk alone was a treat doing. Once again, the walls from the stairwell to the actual room were decked out with numerous shelves, all housing a collection of some form of toy. Brian smiled as he informed me that the majority of these items were his kids. Yes, it seems even his children have a little bit of the collector's bug inside of them.

In a separate room off of the main basement area is where Brian houses his overstock. I'll call it that because Brian seemed a little self conscious about being labeled a hoarder. To that regard, I'd like to assure him that this was not at all the sense I got. Everything he had for sale was neatly organized in labeled boxes or bins, as if to be displays unto themselves. 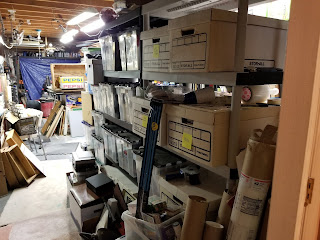 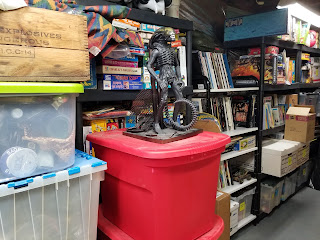 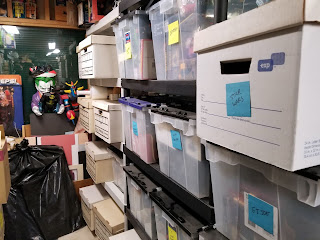 While the sight of it all may have been a little overwhelming and one of those, "Where to start," moments, Brian settled all of that with one question. "What are you looking for?" I thought for a moment, and it hit me. I didn't honestly know, but I had to say something. The first words that came to my mouth were, "Teenage Mutant Ninja Turtles." Brian gave a grin and said something to the tune of, "I can help you with that." With that, the boxes started coming down from their shelves to a small table back in the main basement area.

"Pull out what you're interested in," Brian said. I immediately spotted a treasure I was looking for. A set of the four original figures, mint on their cards. From there, more boxes came out, and with each one I got a little more comfortable with throwing out more and more ideas of what I was interested in, and even more boxes followed as a result. Before too long, I had a nice stack of toys sitting on the table in my "want" pile.

With everything gathered, we then set to the task of negotiation. Brian knew I wanted a good deal and I knew he wanted a fair price. He threw out numbers to me of what his expectations were and I in turn threw out numbers of my own. As we both thought on things, we enjoyed a side conversation about the upcoming shows, such as Schoff's comic show and Dave Hart's Timonium toy show. This concluded with my offer and Brian accepting. The deal was done, the money was paid and I was the owner of some great new toys and collectibles.

What was great about my visit to his home was Brian's delight in showing his collection to me. He was happy to showcase and talk about all the things he had on display or tucked away, and additionally, we had a great conversation about various other things, such as our current hobby interests. Overall, it was a fantastic visit.

Before heading out, Brian gave me a box of his Cool and Collected magazine, which I said I would take to the Schoff show with me and hand out to the various vendors. For those of you who don't know, Brian self published and sold from his site this fantastic magazine. While he doesn't currently have plans to release a second issue, even though he has completed the majority of the work, let's hope that will change in the near future.

Now of course, I didn't leave Brian's house empty handed. Below are the pictures of all the great new stuff I acquired. Sadly, I appear to have lost one item between Brian's house and mine. That would be a random Madballs. While it's not a major loss, it's kind of a bummer I misplaced it. Naturally I took the trash out this morning, which included the boxes from Brian's, and I just realized now that it is gone. Oh well...Maybe it will turn up somewhere.

As for the stuff I can still account for, those are: 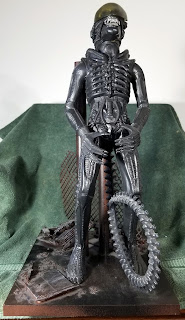 The holy grail of Kenner 1979 Alien toy collecting. This one was nowhere near my radar of want items. In fact, it wasn't something on your average day I would have considered picking up. However, when I saw this item at Brian's house, just asking for a new home, I decided on the spot that I had to have it.

Brian made an amazing custom stand, which he included with the figure at no additional cost.

While I never would have expected it, one of the things I told him I was looking for was the set of Hardees Smurf glasses from the 80's. This was a very random thing to ask for, and I was genuinely surprised when he then proceed to pull out six of the eight glasses.

I just need Papa Smurf and Smurfette to complete my set!

I'm by no means a mint on card collector, or a fan in general of keeping toys sealed. However, even I have to admit I won't be opening these carded original TMNT figures. They're just too pristine to deserve being ripped off their cards. Instead, I'll seal them in Zoloworld protectors and display them that way. 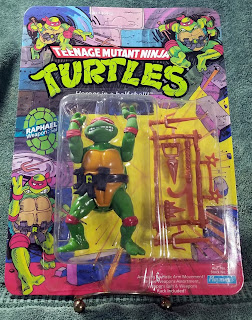 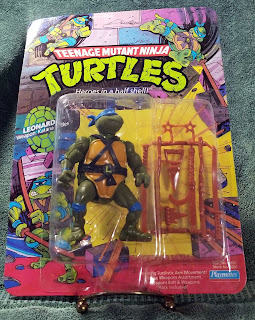 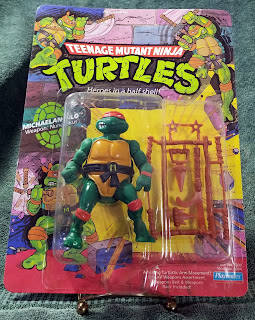 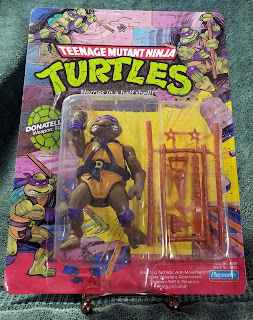 I'm not a big Masters of the Universe vehicle collector, but something about this Roton was begging me to bring it home. 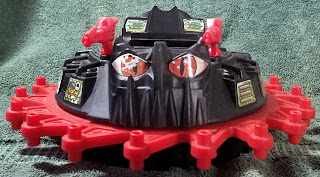 This tray was also too good to pass up. This is classic 80's artwork! 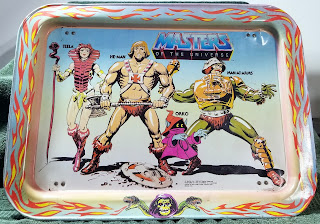 Last up, until I find my Madballs ball, is this awesome complete Speeder Bike from the 1983 Return of the Jedi line. I would have passed this up had Brian not produced the two rear flaps for it. 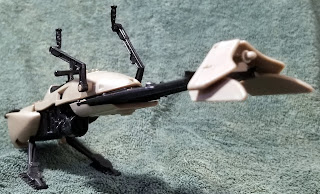 There you have it. My visit to Cool and Collected Headquarters, and my new wares.

Click "HERE" to go back to the home page. For more posts related to this one, please click the labels below.
Posted by The Toy Box on November 06, 2019
Email ThisBlogThis!Share to TwitterShare to FacebookShare to Pinterest