I have a love /  hate relationship with "Weird Al" Yankovic. As a kid growing up in the 80's, I loved his albums. I also loved his movie UHF. However, as I got older, and his albums continued into the 90's, I found myself on the opposite spectrum. I couldn't stand the guy anymore.

While I originally thought this new mindset was a result of me thinking he was merely a rip off artist, stealing and benefiting from other's hard work, the truth was more deeply rooted. It wasn't Al himself. Rather, it was that I simply didn't enjoy 90's music. As such, it's hard to enjoy a parody of a song when you don't exactly enjoy the original. This remains true to this day. While I find myself still enjoying his work from the 80's, I can't get into anything else from him.

What I can get behind is a classic rendition of Al from the 80's. NECA did a fantastic job of this with their 2017 release of the singer. 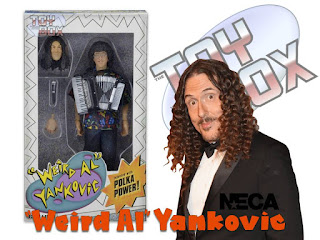 While the window boxed Polka Power figure came with two heads, obviously, I'm more so a fan of the version which features his 80's look on the body. It's a spot on sculpt, featuring all that awesome nostalgia of Al from his curly hair and mustache to his accordion and outrageous wardrobe style. 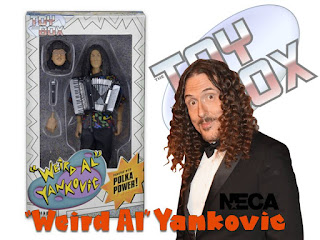 NECA also produced a White & Nerdy version, based on is 2006 "hit" from the album, Straight Out Of Lynwood. 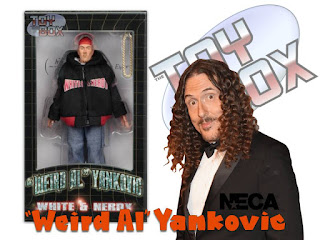 I don't honestly have much more to say on the figures, so instead, I'll leave with a story.

A few years ago, I actually got the chance to see "Weird Al" live. It was an interesting show to say the least. He would sing a song, then promptly walk off stage. While gone, a large monitor would play some of his "classic" moments, such as his mock interviews and Al TV stints. He would then return in a different costume and sing the related song - Picture his fat suit while singing Fat. This rinse and repeat scenario unfolded over the course of the next couple of hours. It was a unique experience, but not one which left me saying my life was enriched or changed for the better by seeing him live.

Click "HERE" to go back to the home page. For more posts related to this one, please click the labels below.
Posted by The Toy Box on November 18, 2019
Email ThisBlogThis!Share to TwitterShare to FacebookShare to Pinterest
Labels: 2010's, NECA, Weird Al Yankovic
Newer Post Older Post Home