The first time I heard Pump Up the Volume by M/A/R/R/S, it was via MTV. The thing which stuck out the most for me int the song was first and foremost the repeatable "Pump Up the Volume" which reiterated throughout it. Secondly, it was the strange video itself, filled with all sorts of space imagery and astronauts.

The 80's came and went, and in 2016, when I started putting together my massive collection of 80's music, this track came back to my mind. What was interesting to find out was that M/A/R/R/S actually never released an album. The reason being for this was because the two groups which would become M/A/R/R/S, Colourbox and A.R. Kane, found they didn't get along in the studio. The end result was the one and only single the band released, Pump Up the Volume. 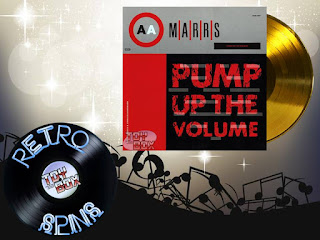 On the single, you will find four different versions of the track, along with one additional song, Anitina. So at this point, it becomes a matter of which is your favorite, or preferable version to listen to. You have your choice of the seven minute original, the more commonly known four and a half minute radio / music video edit, the bonus beats version or the instrumental. Personally speaking, I prefer the radio / music edit version, not because the original is bad, but because it is the one I am more familiar with from the 80's.

Then there's that fifth song, Anitina, the only track with actual lyrics and singing. It sounds like what Duran Duran became during their 90's years of trying to become techno pop. It's not good, and it leaves me kind of glad the band never completed a full album if this is what they would have put forth.

There are quite a few ways of tracking down this song these days, one of which include the soundtrack to the Michael J. Fox film, Bright Lights, Big City. However, if you want an official M/A/R/R/S release, your options are the scarce CD version, which can set you back about twenty-five dollars, the seven or twelve inch vinyls and cassette.

If going the vinyl route, it's key to note you will get the radio edit and Anitina on the seven inch version, and the original, bonus beat, instrument and Anitina on the twelve inch. In other words, you have to buy both to get all of what is on the CD. There is also a forty-five vinyl version, which includes two different radio edits.

The cassette version features all five tracks, and they are repeated in full on both sides.

That's a lot of ways to Pump Up the Volume!

Click "HERE" to go back to the home page. For more posts related to this one, please click the labels below.
Posted by The Toy Box on November 05, 2019
Email ThisBlogThis!Share to TwitterShare to FacebookShare to Pinterest
Labels: 1987, 80's Album Review, 80's Music, 80's Music Review, MARRS, Music of the 80's, Pump Up the Volume, Retro Spins