Rodan, or Radon as he was known in Japan, is a daikaiju (strange beast) from the days of big monsters, rubber costumes and prop wires. The "character" first appeared in the title film of its own name in 1956, and since then has appeared in many films along the most popular of them all, Godzilla. The character has spanned across multiple decades, and been a part of pop culture not only in films, but comic books, novels, and has had all kinds of merchandise released relating to him.

One such piece of merchandise has become a bit of a holy grail to many big monster collectors. The 1978 World's Greatest Monsters: Rodan from Mattel. Based on the title, one would think Mattel was working on a series of toys, but no, only Rodan made its way to toy isles.

The toy had a ton of play features incorporated, which included, thirty-eight inch flapping wings, an opening and closing beak, claws which could grab and a squawking feature. It's a shame it was a one and done deal, because this thing is awesome! 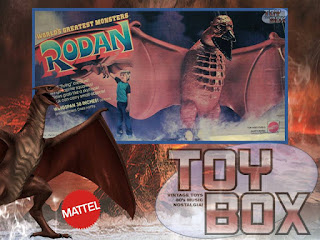 Rodan would fit in nicely in a display of Mattel's other big beasts, Gre-Gory and Krusher. 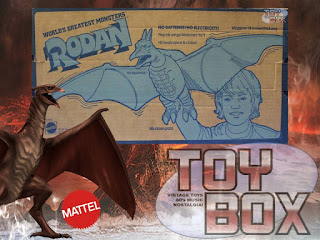 The box has all of that fantastic vintage style designing to it, but unfortunately it's not going to be something most collectors will be able to get. Boxes are few and far between, to the point an empty one will set you back as much as $250.00. With the figure, and in mint condition, I've seen these things go for as much as $2,500.00! Just buying Rodan alone can easily set you back $300.00 to $500.00.

Click "HERE" to go back to the home page. For more posts related to this one, please click the labels below.
Posted by The Toy Box on July 22, 2019
Email ThisBlogThis!Share to TwitterShare to FacebookShare to Pinterest
Labels: 1970's, Mattel, Rodan, World's Greatest Monsters