Ew...Who in their right mind starts an album with a ballad about making out with a girl? First off, ballads? No thank you! Second, I'm not a girl. So when you're singing in great detail about kissing "girl" lips and even tongue, gross dude. If Ready for the World's objective was to make every man in the world turn off their album, mission accomplished.

By track two, I was wondering if Ready for the World's sole purpose of writing an album was to sing about how much they liked girls. While Digital Display definitely had a peppier beat than the first track, Tonight, all it did was prattle on about a sexy girl.

I took a glance at the titles of track three and four, respectively, Ceramic Girl and Deep Inside Your Love and needless to say I didn't get excited for what was coming next. Of course what I feared I would get was exactly that - More songs about how fine girls are. Sigh...At least Ceramic Girl had a solid beat to it. Meanwhile, Deep Inside Your Love was another icky ballad. 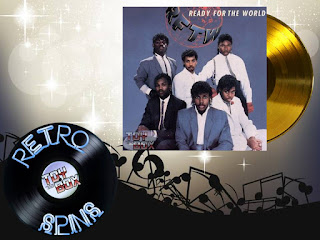 I had to take a break for a minute at this point and look back at the cover for the album. I immediately busted out laughing as in my head I heard, "Just let your SOUUUUULLLLL GLOW!!!!!!" Serious Jheri curl going on there.

Coming back from said break, I was treated to Oh Sheila. Okay, I know, this song too is about a girl. At least this time said girl has a name...And a funky chart topping hit! The track debut at number eighty-five in August of 1985 and went straight to number one by October. The downside to this was it pushed album sales to the point the record went platinum.

Much like the lyrics for Human Toy, the song was, "Alright, it's okay." It had a peppy beat and followed up Oh Sheila pretty good.

Then I got two more boring ballads thrown at me, and finally the last track of the album...another ballad and pretty much by this point I was bored with this album and not really listening.

Click "HERE" to go back to the home page. For more posts related to this one, please click the labels below.
Posted by The Toy Box on July 23, 2019
Email ThisBlogThis!Share to TwitterShare to FacebookShare to Pinterest
Labels: 1985, 80's Album Review, 80's Music, 80's Music Review, Music of the 80's, Ready for the World, Retro Spins