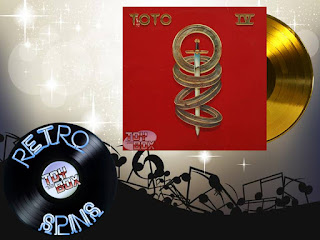 Toto is one of those bands that has always confused me. There are so many "lead" singers in the group that I honestly have no clue who is singing what. It also doesn't help that people come and go and come back and go again from album to album. Despite this though, it doesn't detract for me in any major way.

When I sat down to listed to Toto IV, I heard a few great songs I'd forgotten about; Make Believe, I Won't Hold You Back and Lovers in the Night. Of course, I also heard the albums front runner hits, Rosanna and Africa. Granted that's only half the songs from the album. Sadly, the other five really didn't do it for me. They were okay, but meh...Not really noteworthy.

Hearing this album actually prompted me to look a little closer at Toto. The reason being that the only albums I own from them are their 1978 self titled debut, IV (1982) and The Seventh One (1988) - I'm not being lazy, that's really the titles here. I may have to pick up Hydra (1979) for the song 99 and Fahrenheit (1986) for I'll Be Over You. I don't appear to know any songs from any of their other albums.

Click "HERE" to go back to the home page. For more posts related to this one, please click the labels below.
Posted by The Toy Box on July 09, 2019
Email ThisBlogThis!Share to TwitterShare to FacebookShare to Pinterest
Labels: 1982, 80's Album Review, 80's Music, 80's Music Review, IV, Music of the 80's, Retro Spins, Toto