I have to be honest and say I really don't respect the band UB40. The reason for this being that they themselves, well, rather Ali Campbell, on behalf of the band is quoted as saying their music has been, "a series of compromises". Essentially what it came down to was the band continued to compromise the vision for their music because they wanted to commercialize it for radio play.

Sorry, but to me, art should never be compromised. Be it music, movies, drawings, paintings, etc. Do what you love and do it with the passion you see in it. Granted if you asked UB40 how they sleep at night making such compromises, they would probably respond in line with, "Very well on super king size beds with satin sheets." Okay, fair enough. There's no denying these compromises brought with it hits which in turn included money. Still, where's the integrity in that?

Anyway, enough beating UB40 over the head for my own moral justices. I'm hear to talk about albums. Today's just so happens to be the band's fourth studio album, Labour of Love...I so badly wanted to strike out the work "love" and type "compromises". Apparently I'm really butt hurt over here. 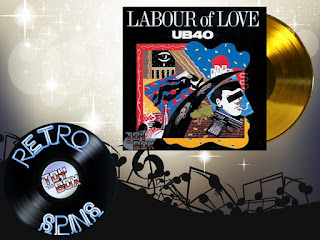 Labour of Love features ten cover tracks of their most favorite and influential reggae tracks which the band hand picked to rework for the album. Their plan was to use this to help commercialize reggae music across the world.

Did it work? Well, I suppose so. How many people were playing Red Red Wine when it came out in 1983? Oh, wait! Red Red Wine wasn't actually a reggae song, now was it? The track was actually written by Neil Diamond in 1967 for his second studio album and it is very much so not a reggae mix. The band had mistakenly thought the track was from Tony Tribe who released a cover of it in 1969. Oops. Oh well, that's what happens when the internet doesn't exist. No way to cross reference stuff like that.

Nitpicks aside, was the album good? Well, I honestly don't particularly like reggae music. So for me, UB40's overall plan for the album ended up sliding towards home base and much like Willie Mays Hayes came up short. I won't say Red Red Wine is the only good track as I did also enjoy Johnny Too Bad and She Caught the Train. Unfortunately though, three out of ten is a pretty bad average.

You know, at the end of the day, I paid a buck for the album and I only bought it for one song. I think we all know that was Red Red Wine. So to get a second and third track out of the bunch for me was really just a bonus.

Click "HERE" to go back to the home page. For more posts related to this one, please click the labels below.
Posted by The Toy Box on July 02, 2019
Email ThisBlogThis!Share to TwitterShare to FacebookShare to Pinterest
Labels: 1983, 80's Album Review, 80's Music, 80's Music Review, Labour of Love, Music of the 80's, Retro Spins, UB40