Nena? More like Nein. Nein Danke if I'm being polite.

It baffles me how songs not sung in a native tongue can become so popular that not only do they find a large audience outside of their countries, but in the case of Nena, can even shoot all the way up to number one on the charts. To piggyback on the popularity of their hit, 99 Luftballons, the band even translated the song to English. Get this, it wasn't as popular as the original German version. 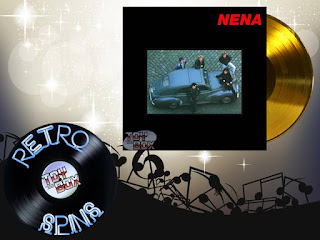 Don't get me wrong. I'm a big fan of the German version myself and have it in a steady rotation of my 80's shuffle. Much like the majority, I too prefer this version over the English translated one. However, the rest of the album, Nena's self titled 1983 debut, I just can't get behind. Because I don't know what's being said on the album I really can't get into it. Perhaps it would be different if there were catchy riffs, a great beat or even high energy to the tracks. Unfortunately, that doesn't exist.

Falco proved in 1985 that it was possible to not only find success in the USA, but become more than a one hit wonder. It's because of this I was really hoping to find something else on Nena's album that would stand out of the bunch and prove to be an equal if not greater track than their one hit wonder. Never found that song.

The album as a whole turned in to very ignored background noise and quite frankly I lost so much interest in it that when 99 Luftballons played I didn't pay much attention.

I wish I could say more, but the album is just a dud for me. Like I said, if I spoke German I may have found something more to this, but I don't. So I didn't.

Click "HERE" to go back to the home page. For more posts related to this one, please click the labels below.
Posted by The Toy Box on July 16, 2019
Email ThisBlogThis!Share to TwitterShare to FacebookShare to Pinterest
Labels: 1983, 80's Album Review, 80's Music, 80's Music Review, Music of the 80's, Nena, Retro Spins