There are many fans of The Rocky Horror Picture Show. In fact, an argument could be posed that these particular fans actually put the "fan" in fanatic. Unlike many pop culture classics, it seems Rocky Horror fans go above and beyond the call of duty to band together. They crowd movie theaters at night, and then do anything and everything they can to participate in the movie - Be it dressing up as their favorite characters and / or dancing and singing along in movie theater isles. Their bond with each other is truly like no other we've seen before.

We doubt anyone in Hollywood could have predicted the impact such an odd musical would have on the world. We doubt even more that people would have expected fans to want every bit of merchandise they could get their hands on. This is most likely why the film has seen just about every form of merchandising known to man produced; mugs, shirts, posters, bags, make-up, stickers...The list goes on and on. Of course, being The Toy Box, we're here to talk about none of the above, but rather toys. Yep, Rocky Horror has even had a fair amount of those.

So here's a debate we put forward to our readers - Is it fair to call something an "action" figure if it actually has zero articulation? Or should this more fairly be labeled a statue? We raise this question because Vital Toys 2001 line of figures for The Rocky Horror Picture show fit this criteria - They're labeled as action figures, yet have zero articulation. 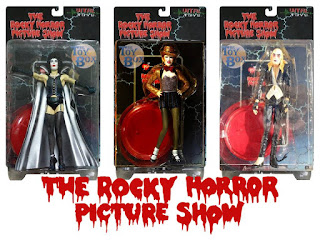 
Unfortunately the line only survived for three figures before being cancelled. This could be attributed to Vital Toys really not making that large of an impact on store shelves. Between the companies limited life from 2001 - 2004, their merchandise was really only made available via specialty shops such as Tower Records / Video or Sam Goodie. This of course meant they also came with rather large retail prices. 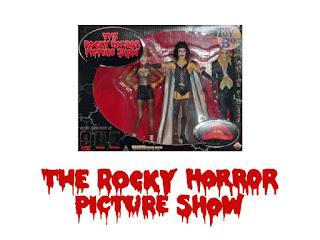 The line literally came and went overnight, and to this very day remains rather obscure with a lot of collectors not even knowing it exists. This could contribute majorly to them being readily available on secondary markets for relatively low prices, but still not selling.

Click "HERE" to go back to the home page. For more posts related to this one, please click the labels below.
Posted by The Toy Box on February 25, 2019
Email ThisBlogThis!Share to TwitterShare to FacebookShare to Pinterest
Labels: 2000's, The Rocky Horror Picture Show, Vital Toys