Rolling Stones and other publicized music critics were not kind to Rod Stewart's 1984 album, Camouflage. Well...To each their own.

I'd never heard a full Rod Stewart album until picking this one up and I was quite happy with what I got. Track after track delivered for me. In fact, the only song I really didn't like all that much were the title track of the album itself. It was okay, but it just didn't have the punch behind it the other tracks were throwing. Even the final track, Trouble, which turned out to be a ballad wasn't terrible. 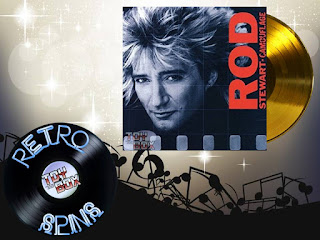 Infatuation was the first hit from the album. It charted in May 1984 at number forty-seven and from there went all the way to the number six spot where it sat for two consecutive weeks. Let's be honest - To make it to number six at this particular time of music history was quite a feat. I mean, look at what the top five songs were; When Doves Cry (1), Ghostbusters (2), Dancing in the Dark (3), State of Shock (4) and Eyes Without A Face (5). That's a solid start to the perfect greatest hits of the 80's album right there.

Some Guys Have All the Luck was the second charter from the album and debuted at number fifty-seven in August 1984. It only managed to make it to the number ten spot by October of that same year - And yes, it was still contending with Prince (as well as Madonna at this point).

Stewart's cover of Free's "All Right Now" was the last track from the album to chart. It debuted at number eighty-eight in December of '84, but disappeared the following week.

I'm seriously not going to hate on this album. I was thrilled with it. It was entertaining from start to finish and I nabbed seven new songs for my 80's iTunes mix as well as my iPod shuffle. You may as well call the album perfect at that point. I get it though. Music is subjective. Listen to it for yourself and see what you think.

Click "HERE" to go back to the home page. For more posts related to this one, please click the labels below.
Posted by The Toy Box on February 19, 2019
Email ThisBlogThis!Share to TwitterShare to FacebookShare to Pinterest
Labels: 1984, 80's Album Review, 80's Music, 80's Music Review, Camouflage, Music of the 80's, Retro Spins, Rod Stewart