Rockwell's Somebody's Watching Me is 80's pop at its most mediocre. It's as if Gordy Records (a division of Motown) knew the album was garbage and that the only selling point to it was Michael Jackson's vocals on the chorus of the title track. So much to the point that the album cuts right to the chase and starts with the song. Nothing else after the track comes close to topping the pure enjoyment to the ears that Somebody's Watching Me (the song) delivers. 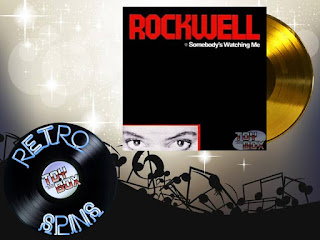 Bad songs aside, at the end of the day the biggest slap in the face is the price tag that comes with the album. Original pressings can set you back $55.00 or more! That's pretty bad for an album that most people are buying for one song.

The twenty-six second mark through the thirty-nine second mark of the video below really sums this up...


I just can't with this album anymore. Bottom line, if you want to spend a ton of money for one track, Rockwell's Somebody's Watching Me is certainly the place to do that. Okay, that's not exactly fair...There's a Japanese pressing which has recently hit the market that is roughly $15.00. So, you can get it for cheaper if you really wanted to. Still...Fifteen bucks for one song? That's steep for some.

Click "HERE" to go back to the home page. For more posts related to this one, please click the labels below.
Posted by The Toy Box on February 26, 2019
Email ThisBlogThis!Share to TwitterShare to FacebookShare to Pinterest
Labels: 1984, 80's Album Review, 80's Music, 80's Music Review, Music of the 80's, Retro Spins, Rockwell, Somebody's Watching Me