I love that feeling I get when I finish up a post I've been working on for years. Some times it takes a bit of effort to track down every single piece from a toy line. I can't tell you how many posts I still have in the works because I simply couldn't find everything from the line.

Well, enough of that.

Let's look at today's entry, Dixie's Diner from Tyco. The line features characters and playsets designed in a sense to that of your standard 1950's diner - A diner of course run by Dixie. In total there were eleven dolls - six of which came packaged individually and the remaining five with a playset.

Each stood approximately three inches tall and featured moveable heads,  arms and legs. Additionally, they each came with a set of unique cloth clothing. In essence, they were miniature dolls. 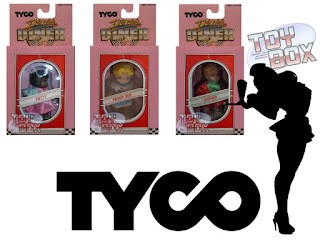 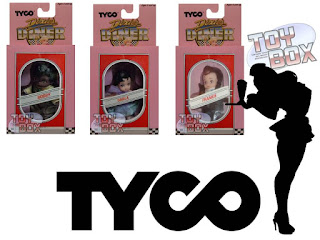 
To flesh out Dixie's Diner you could purchase additional accessories such as the Counter Service Set, Kitchen Set and Refrigerator - All a must have if you ask me. 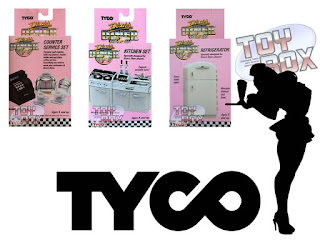 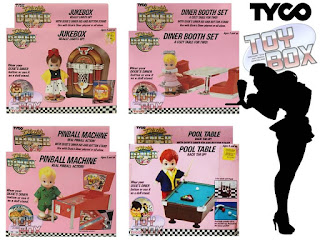 
Sure, you could hoof it over to Dixie's, but that wouldn't be hip. Rather it's far more cool to ride your pink or blue convertible over to the joint. It was cool how Tyco made one for the guys and one for the gals - Even if they're the exact same molds in different colors. 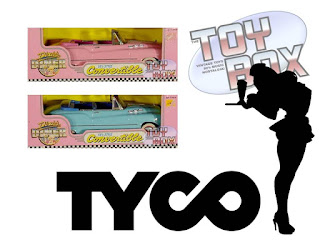 
To get Dixie herself, you'd have to purchase the Diner Playset. The set also included a counter with seats and a table setting set for two. 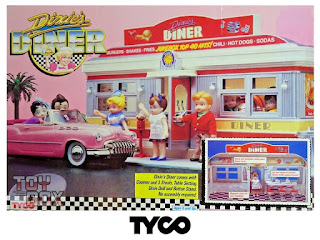 
Of course if you're down with the one stop shopping, Tyco was happy to sell kids a Deluxe Furnished Diner Playset. This massive set featured (of course) the diner with counter, seats and a table setting for two as well as all four of the playset accessories; jukebox, diner booth, pinball machine and pool table. If that wasn't enough, the set also included a Dixie figure as well as the four figures packed in with the playset accessories; Dotty, Barbara Ann, Edie and Mitch. 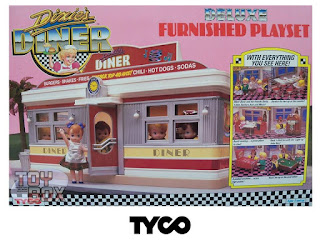 Dixie's Diner is a pretty fun set of toys. Despite the pink packaging (not that there's anything wrong with pink), the line is both boy and girl friendly. As a kid I would have had no problems playing with this set because I love cooking so much. This set would have totally fueled my imagination for running my own restaurant. Of course, I'd have to be Frankie and Dixie would be one of my waitresses.

Click "HERE" to go back to the home page. For more posts related to this one, please click the labels below.
Posted by The Toy Box on February 11, 2019
Email ThisBlogThis!Share to TwitterShare to FacebookShare to Pinterest
Labels: 1980's, Dixie's Diner, Tyco