Well....Crap. This wasn't supposed to happen. I recently was listening to a greatest hits of Laura Branigan and found myself saying, "This is really good! I need to hunt down her studio albums from the 80's." This was an expensive undertaking as several of her albums are a little scarce which makes them a bit expensive. I'm talking as much as $50.00 expensive for one in particular.

I haven't listened to all five of the albums noted above just yet, just Branigan from 1982. However, it was awful! Where are the quality of songs from the greatest hits album I heard? Gloria was the only saving grace of the entire thing and heck, I already had that one from the aforementioned compilation. 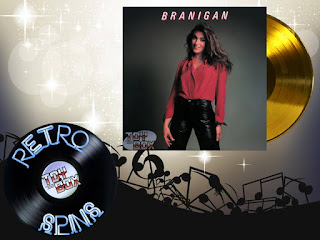 The album starts out on a massive lull with what would become the first chart topper from the album (for a single week at number 96) and one of the most boring songs I've ever heard in my life, All Night with Me. It follows that up with Gloria and it was at this point in time that I said to myself, "Okay, it's going to get better from here." I then re-braced myself for an album that was going to blow me away. I could accept that one out of nine was a dud. That's not a terrible average.

Sigh... What I instead ended up with was one out of nine being good....Gloria. I was so disappointed. Disappointed to the point that my desire to listen to the other four albums was immediately swept under the rug. Sure, I'll get around to it, but they're no longer a top priority for me.

I suppose in the long run I shouldn't be overly shocked. The only track which really managed to move on the charts was Gloria. The song went to the number two spot by November of 1982 and stayed there for three consecutive weeks before very slowly falling off the charts over the course of the next three months. With the exception of the above noted All Night with Me, there were no other hits from the album.

Maybe I shouldn't be so bummed out in light of that. Clearly things have to get better. After all, the two above noted tracks are the only ones from the album which made their way to the greatest hits album. Perhaps the best is yet to come.

Click "HERE" to go back to the home page. For more posts related to this one, please click the labels below.
Posted by The Toy Box on February 12, 2019
Email ThisBlogThis!Share to TwitterShare to FacebookShare to Pinterest
Labels: 1982, 80's Album Review, 80's Music, 80's Music Review, Branigan, Laura Branigan, Music of the 80's, Retro Spins
Newer Post Older Post Home