Today brought tidings of new toys! Two to be exact.

First up came from a trip to a local Target. While I don't normally buy "new" toy lines, this figure called to me in a big way. 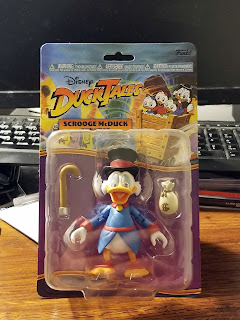 I loved DuckTales growing up and still do to this day. In fact, I wish someone out there would release the final episodes of the original series which never made it to DVD from Shout Factory. But, that's a gripe for another day.

The packaging for this figure is super sweet. I really like the artwork on both the front and back. Oops, here's the back. 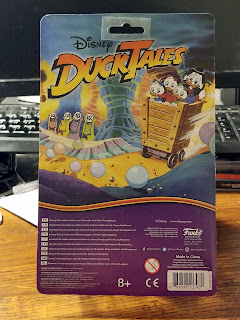 I want to say the artwork is straight out of one of the show's episodes, but at my old age I honestly don't remember at this point. It's been years since I've actually seen an episode of DuckTales.

Besides being Scrooge McDuck, what really drew me to give into the temptation and buy this figure was that it didn't appear to be from a set per se. On the peg were Chip and Dale from the Rescue Rangers as well as Baloo from TaleSpin, but nothing else pertaining to DuckTales. Since it appeared to be a one and done purchase I went ahead and dove in...Obviously.

Well, I'm not one for keeping my figures sealed in carbonite, so let's crack this bad boy open and take a look. 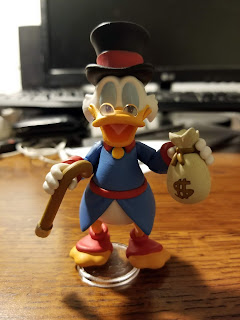 Front and back, the look of the figure is spot on to his cartoon iteration. This is without a doubt Scrooge McDuck from the top of the top hat all the way down to the spats on his feet. The sculpt is superb and the color of all the clothing right on the button.

The figure is a tight squeeze on a standard Star Wars figure size action figure stand, but it can work. Unfortunately, due to the size of the figure, he can be a little off balance on such a small stand. Personally, I feel Funko really missed an opportunity with the figure to include a stand with it. I immediately thought when looking at it through the package, "How cool would it be if he came with a large dime action figure stand to give a nod to Scrooge's luck dime...and get a stand with it?" Oh well. Wishful thinking I suppose. 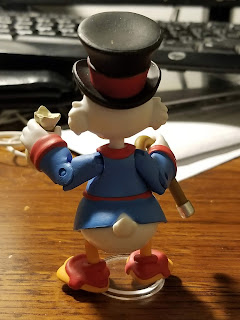 The figure has decent articulation, but not the best. The head is on a ball joint as are the shoulders. The elbows bend and the legs swivel at the waist. While this makes for minimal poses, the default stance is fine for display. I don't necessarily need my Scrooge McDuck contorted in an action pose.

I do want to zoom in a bit on the head though and capture that magnificent detail in the spectacles. I don't think I've ever seen a figure with actual glasses that were sculpted vs. painted, let alone ones that were transparent. 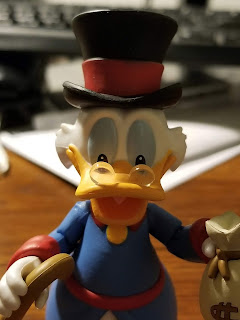 Scrooge comes with a couple of accessories; a cane and a money bag.

While I initially thought the cane was too short, a quick glance at some photos of the character with a comparison to the actual cane and figure proved me wrong. However, I am a little disappointed that the wrists don't swivel so you can at least have him holding the cane by the top as if to be walking with it. 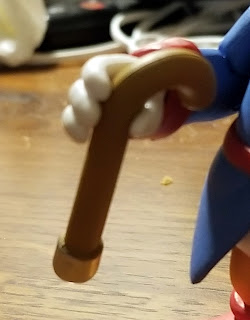 You can somewhat achieve this look by turning the arm outward a bit. I suppose it looks okay. 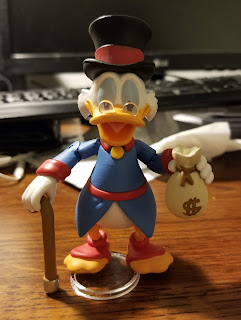 My favorite accessory out of the bunch was the money bag. I love the look and shape of it. It's kind of cool. It reminds me of the scene from Mickey's Christmas Carol where Scrooge is tossing money sacks at Badger and Mole. 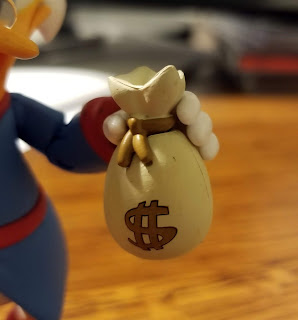 Overall, I really like this figure. It gets bonus points for being a one off, because quite honestly at $9.99 a piece I probably would have walked away had this been a series of figures based on DuckTales. Don't get me wrong, I still would have thought it was cool. I just wouldn't have bought it.

The second figure I got came in the mail before actually heading out to target. This one is 100% Tony's fault. First he got me all riled up about owning a B.A. Baracus figure. Then I decided since I had B.A. I had to have my second favorite character from the show... 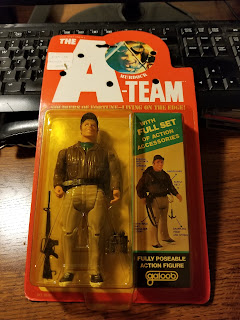 This one of course came from ebay because...well...I don't know of any retail stores selling the original Galoob A-Team figures anymore. 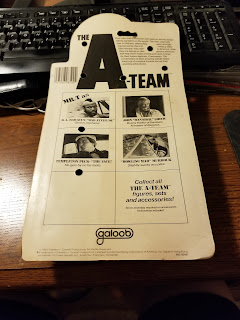 When tracking this figure down I learned three important things.

1) Murdock is the rarest of all four A-Team figures.

2) As such, Murdock is the most expensive of all four A-Team figures.

3) Sellers on ebay selling Murdock loose don't tend to have all the accessories.

At the time of my purchase, nobody was selling a complete / loose Murdock which meant if I was dead set on having one (which I was), I was going to have to up size my purchase to a carded one. Mind you, those were fairly limited too. If I recall, there were only two in the US and another from the Netherlands.

I ended up paying $63.00 before shipping (closer to $70.00 after). That was well above what I was expecting to have to pay for this figure. Especially considering the remaining team members go for $30.00 to $40.00 carded.

Of course, being the type of collector I am, I opened this bad boy up and immediately cut its resale value by a third. Oh well. Not like I'm going to sell it.

Let's have a look. 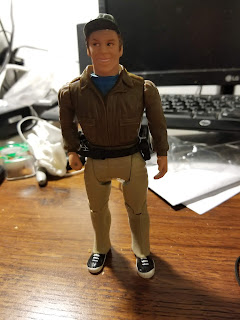 Right out of the package, the figure looks okay. He'd definitely got the clothing of Murdock... 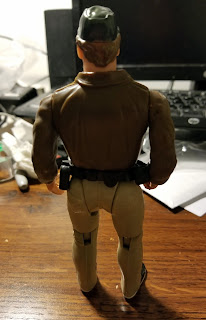 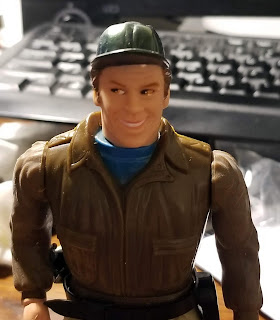 I get that Murdock was crazy in the show (that's what I liked about him), but this guy looks creepy. Like hanging around a playground creepy. The way he's glancing off to the side makes him look like he's up to something shady and don't even get me started on the grin. So many inappropriate "jokes" which I don't want to be flagged for come to mind.

The figure comes with a boatload of accessories...and not one bit of instructions for how any of it goes together. 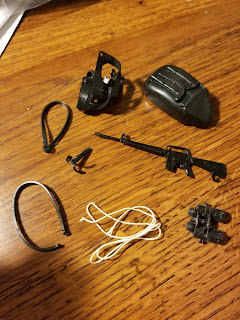 There's a backpack, a gun, binoculars, a hook, a piece of string, and three pieces of rubber, one of which is crumpled into a ball from being in the package for thirty-five years. Dang, that's a long time. Now that I think about it, this figure didn't have any sticky residue on it, which is common with figures left in packages (or bags).

Well, let me see what I can do with all of these bits and pieces. 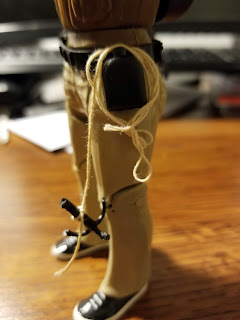 Okay, the string gets tied around the hook to make a grappling hook. That one was easy - As it was visible on the package. What wasn't easy was how large my hands have gotten in my adult years. Tying string around small hooks isn't easy. As you can see in the photo, there's quite a bit of leeway on the tied end. It was the only way I could get my chubby digits to make the knot.

As a side note, it's typically the grappling hook which is missing from the loose figures listed as "near complete" on ebay. 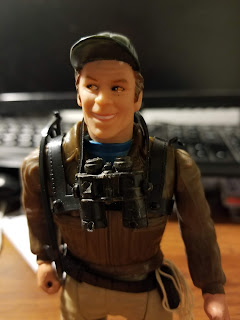 The smaller rubber piece was the strap for the binoculars. 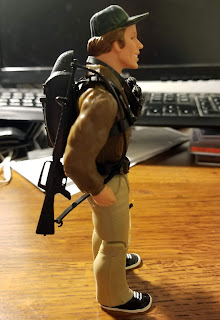 The larger was for the M-16. It was a beast getting the one end connected to the barrel. Just as I was about to give up for fear of breaking either the gun or strap, it popped on.

Sadly, the gun won't fit into Murdock's hand. Well, his right one anyway. The figure (all the figures actually) has a little hole in his right fist shaped hand and the handle of the gun is too thick. It may fit in his left hand without issue, but for display purposes I'm going to leave it over his shoulder. 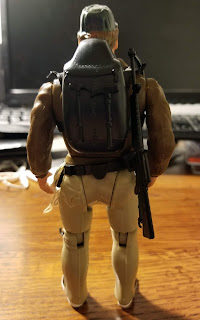 The crumpled up mess of rubber and backpack hooked together to form the completed backpack with straps which went over the figure's head and strapped around his chest. Once again those large fingers became a bit of a problem because the straps had to be "popped" into place over tiny little pegs.

Big fingers aside, it was easier than I thought to deduce what each piece was for. Especially once I started putting common sense into practice and eliminating pieces. Believe it or not, I actually put the backpack together first, then the binoculars, then the gun and finally the grappling hook. 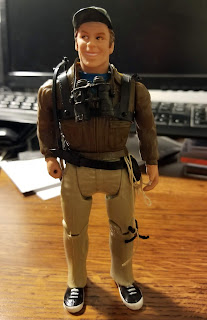 The figure is a little top heavy with all of the gear attached to it, but I'll fix that with an action figure stand. Additionally, and oddly out of all things, the head is a little wobbly. I don't think I've ever seen something like that with a figure straight out of the package. Overtime, sure, but not brand new - Regardless of the age of it. 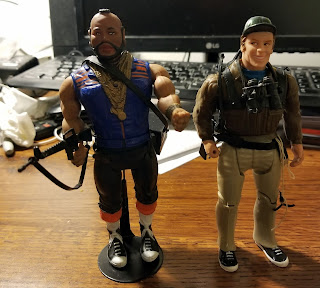 With that, half of The A-Team are assembled. Maybe the two of them will go on a mission together to seek out Face and Hannibal...But not Amy Allen. She wasn't really part of the team. Plus, if you look at her figure she has a really creepy head / neck thing going on.

Click "HERE" to go back to the home page. For more posts related to this one, please click the labels below.
Posted by The Toy Box on July 24, 2018
Email ThisBlogThis!Share to TwitterShare to FacebookShare to Pinterest
Labels: 1980's, 2010's, A-Team, Duck Tales, DuckTales, Funko, Galoob, Howling Mad, Murdock, Scrooge McDuck, The A-Team