It's July, which means it was time for another Dave Hart Show at the Timonium Fair Ground. I know I said when I went to the show in March that I was going to skip the July show, but you know...that was four months ago. That was plenty of time for me to change my mind.

Once again my girlfriend ran into Brian from Cool & Collected and I missed him. I'll have to settle for seeing what he got when he posts it at his site.

As per usual, my first stop was to Mr. CD Guy. Unlike prior visits, I showed a lot of restraint. While most trips to Timonium would have me coming back with a 100+ CD's, this time I picked out around thirty. To be blunt, prior trips resulted in a lot of CD's I ended up not wanting and I really needed / wanted to avoid this. Well, that and throwing away money. 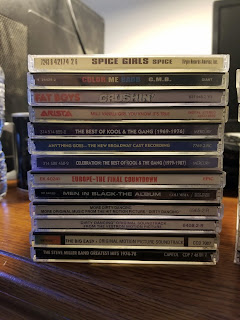 When I saw the soundtrack for The Three Musketeers, I had to have it for the terrible song from Rod Stewart, Sting and Bryan Adams. After all, it's a beloved song by many commenters from my JusToys line of bendable figures post. 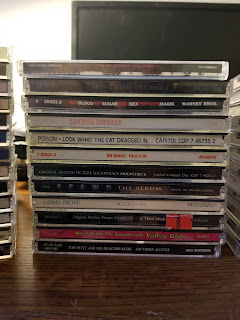 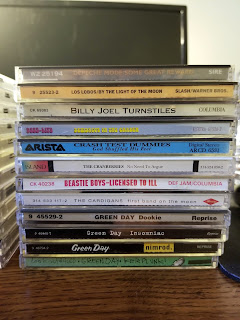 I'm really disappointed with my first toy purchase of the day. The seller bamboozled me.

I asked the dealer if she had a Superman from Kenner's Super Powers and she pointed me towards this... 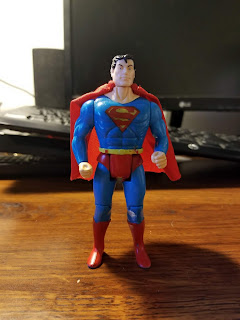 On the surface, it looks great. Good solid hair, solid insignia on his chest and also on the cape.

Unfortunately, when I got home and really took a good look I found the date "1989" on the back of the leg. Not only that, but there was no action feature. In short, this was no Super Powers figure. It was a DC Super Heroes one.

Yeah, okay, it's the same sculpt of the original Super Powers figure, but that's not the point here. I wanted the original one, and this jerk sold me this piece of junk. I guess I should have known the $25.00 price tag was too good to be true.

I hated on this Superman figure for several hours after the show before it finally dawned on me, "Just put it in the cabinet with the 1989 movie Batman figures. It will look great with them." Well, duh! How could I have not thought of this before? After all, the DC Heroes line was produced to coexist with the 1989 Batman one. I can honestly say I'm no longer upset with this purchase. Supes looks pretty awesome hanging out on the shelf with the gang!


The next item I picked up was an impulsive buy, but one I was happy to get since I had it as a kid. LJN's vintage E.T. on the card. 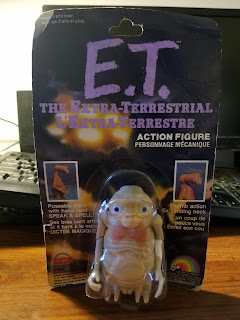 Of Course I got home and ripped it open, freeing him from his plastic prison. At $10.00 I'm not ashamed of this. 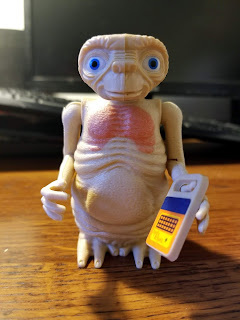 I love the packed in Speak & Spell - Even if it is the same color plastic as the figure. Then of course there's the awesome lever on the back which makes his neck extend. I love every bit of this figure.

I was hoping to find a few Thundercats figures I was looking for, but didn't really fare well. While I found several, they were a combination of missing weapons or poor paint jobs. I didn't walk away empty handed though... 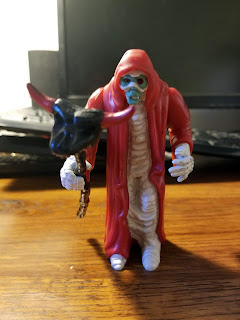 Out of all the Thundercats figures, believe it or not, Mumra in his mummy form was number one on my list. He's a little sticky, but some mild soap and water will take care of that.

Soundwave was the last Transformers G1 figure I've been looking for and was happy to come across one at the show. 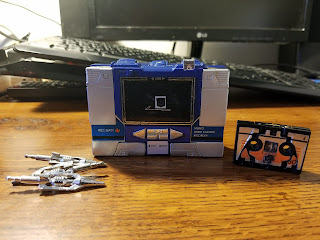 I was a little annoyed when I got home because I thought I had been bamboozled by another vendor. The guy sold it to me as "complete", but when I took it out of the bag I couldn't find the cannons.

As I was disgruntely (not a word) transforming the figure for a photo op, my finger slipped down the back. With it, a compartment on the back opened and tucked inside were the two cannons. HOORAY! 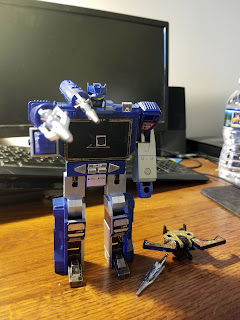 Upon closer inspection it looks like the cannons for the cassette (Buzzsaw) are missing too, but quite honestly I'm not too concerned with that. It's most likely going to sit in my cabinet like this anyway... 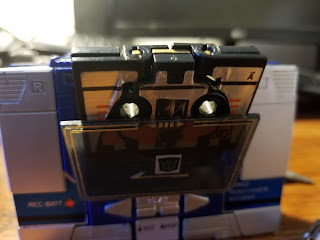 No need for cannons in that configuration.

Reader LBD "Nytetrayn" pointed out something to me that in hindsight seems so obvious now. The cannons for Soundwave are his batteries! No wonder they were in the compartment on his back!

Though there were several other figures I was looking for, I either didn't find them or didn't find them in the condition I personally wanted. These included Galoob's A-Team, Mego's Buck Rogers, LJN's 30 / 30 and Kenner's Michael Knight and Kitt.

My last stop was to two tables strictly focusing on G.I. Joe. For those of you who have kept up with my Timonium posts, you probably know by now these are my last stops because I know at the very least I'll find something at these tables.

I will say this - There's a particular Joe seller there, the first guy I visited, who I won't bother with anymore. His prices are ridiculous and he has an aversion to allowing you to take the plastic holder the figure is in. You would think for the outrageous prices he charges this could at the very least be a cost of doing business, but nope. He's clearly in it for the money and not the love of G.I. Joe.

Circling back around the far left side of the show, I made my way to the Joe dealer I bought from last time. When we last spoke, I had given him a list of figures I was looking for. I was pleasantly surprised on several fronts with the guy - Who also happens to be named Joe.

He immediately recognized me when I walked up to him. Shook my hand and said, "I've been working on your list for you!" He then pulled out a box from under his table which he had made specially for me. Inside were several of the figures I wanted.

While showing me what was inside, I noticed he had a Monkeywrench on the peg, but not in the box. I said, "Oh, I wanted this one as well." He quickly stopped me and said, "I didn't put that one in the box because I didn't think it would meet with your desired condition." He then pulled it down off the peg and showed me several flaws on the figure. Good looking out!

I filled out the box with a couple more figures to make it an even ten which fit perfectly inside - And yes, he lets you keep the plastic holders. After ringing me up, he gave me a nice discount and then asked if I had an updated or new list of figures I wanted him to look for. Naturally, I did.

Overall, it was a great buying experience. Let me show you what I got! 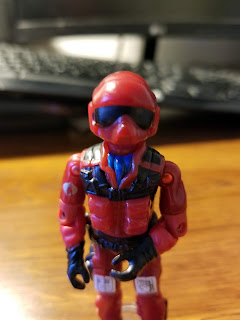 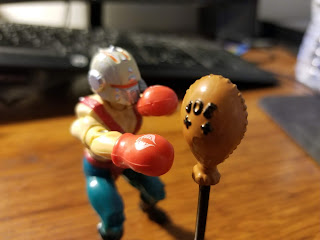 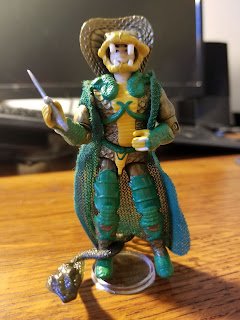 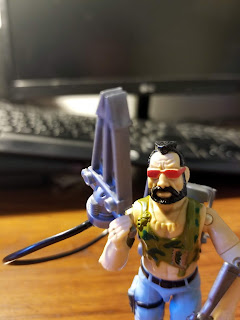 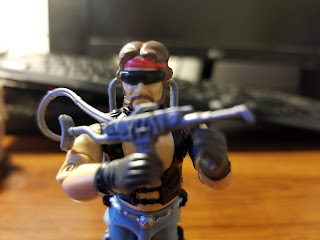 Look! He even had Copperhead...and only wanted $20.00 (before the discount he gave me). 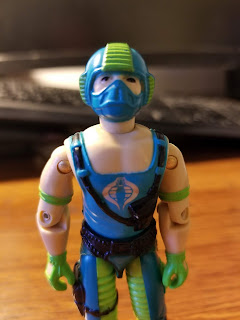 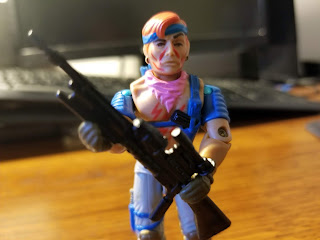 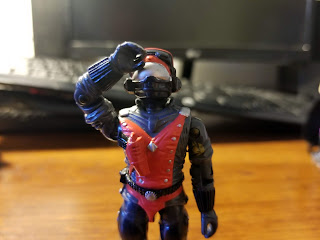 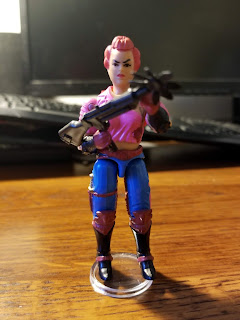 My Joe Cobra collection is coming along great!

I'm by no means going for a complete collection here (or apparently any particular organized order to displaying them). I'm only buying the ones I really want and there's actually not too many more I'm looking for (Cobra wise). I think eleven was the total when I counted this afternoon. There are a few Joes I do actually want to collect, but I'm going to finish grabbing the Cobra ones first.

On the way home I stopped at a toy store in Maryland called Lost in Time Vintage Toys where I picked up a couple more things. Because I took a ton of photos of the shop I don't want to put all of that here. I'll follow up with another article tomorrow.

Click "HERE" to go back to the home page. For more posts related to this one, please click the labels below.
Posted by The Toy Box on July 07, 2018
Email ThisBlogThis!Share to TwitterShare to FacebookShare to Pinterest
Labels: Convention, Dave Hart Show, Timonium