Truth be told, I really only know Living In A Box and their subsequent April 1987 album and song of the same name because of the Masters of the Universe movie. It was played during the scene where Gwildor snipes the chicken and ribs from the car of the two teenagers kissing.

The song of the same name from the band of the same name managed to debut at number eighty-eight on the charts of June 1987 and worked its way to number seventeen by August before working its way back down. The second single, So The Story Goes, debuted in October of '87, but disappeared the following week making the band officially a one hit wonder. 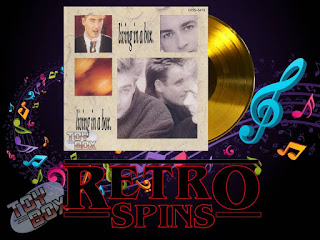 The album plays like your typical late 80's album. It's got a lot of synth to it, but it's not a synth pop style such as you would have heard in the early 80's. I know, right? What am I talking about? Believe me, someone out there is nodding their head saying, "I know what you mean." It's just one of those things that you either know what I'm talking about or you're out in left field wondering what I'm talking about.

Overall it's a pretty terrible kind of album. Definitely one of those records that became annoying background noise fast and I had to force myself to stick it out. I can sum it up as such; It's like Hall and Oates meets diarrhea. The album just craps in your ears for the forty-two minutes it drones on.

In fact, Living In A Box (the song) really isn't all that great either. I guess these guys lucked out by having a mediocre hit during the decline of the 80's. Hey, take your prize where you can get it, right?

Living In A Box has a spot on my IPOD, but nothing else made its way from the album to the shuffle. Honestly, I don't know how long Living In A Box will hang out before getting the ol' trash can icon. Unless these guys managed their money well, I'd say chances are high they really are living out of cardboard boxes right now.

Click "HERE" to go back to the home page. For more posts related to this one, please click the labels below.
Posted by The Toy Box on July 10, 2018
Email ThisBlogThis!Share to TwitterShare to FacebookShare to Pinterest
Labels: 1987, 80's Album Review, 80's Music, 80's Music Review, Living In A Box, Music of the 80's, Retro Spins