Retro Spins: Rocky Burnette - The Son Of Rock And Roll

Rocky Burnette
The Son of Rock and Roll
1980

Here's an obscure one for you this week - Rocky Burnette's Son of Rock and Roll. There's a little confusion around this album as many sites disagree on when it was released. Some say 1979 while others say 1980. I'm going to go ahead and go with 1980. The album actually has two dates on it - '79 and '80. However, why would it have 1980 on it if this wasn't a valid year? Get my logic?

Rocky really only had one hit and truthfully it's not one many people know about. Tired of Toein' the Line charted in May of 1980. While it made its way all the way to the number eight spot by July, it quickly descended down the charts from there - Disappearing by August. While Burnette would go on to release five more albums between 1982 and 2006, he never emerged beyond his one hit wonder. 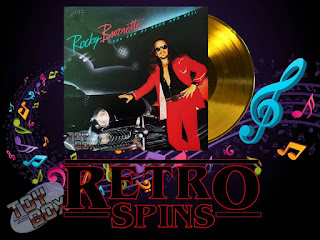 To this day the album Son of Rock and Roll remains out of print and doesn't appear to have ever been released on CD. In fact, Rocky Burnette CD's seem rare in general. I've only seen his 1996 and 2006 albums somewhat readily available on CD and his 1983 album once in this format.

When I first started listening to the album it sounded vaguely familiar - voice wise, but I couldn't place it at first. After about three or four tracks it finally hit me. It honestly sounded like John C. Rielly's character, Dewey Cox - Only not in a comedic sort of way.

Most of the songs on the album aren't bad, but sadly they don't stick out either. I wouldn't hate hearing this album again, but I also probably wouldn't go out of my way to do so. I did end up adding two additional tracks to my IPOD beyond Tired of Toein' the Line. Those songs were Angel in Chambray and Clowns From Outer Space. Out of all the mediocre tracks, they stood out the most for me.

Click "HERE" to go back to the home page. For more posts related to this one, please click the labels below.
Posted by The Toy Box on July 24, 2018
Email ThisBlogThis!Share to TwitterShare to FacebookShare to Pinterest
Labels: 1980, 80's Album Review, 80's Music, 80's Music Review, Music of the 80's, Retro Spins, Rocky Brunette, The Son of Rock and Roll