Let's go back a year ago. Fellow blogger Dex of AEIOU...and Sometimes Why posted about a vintage Japanese television show called Supaidaman by Toei. This was in fact the Japanese version of Spider-Man. Enthralled by the concept I immediately struck out on a quest to locate the series in DVD format. I found it, and immediately about faced it to walk away. I wasn't about to pay $700.00 to $1,000.00 US for it. No way, no how.

Wait, hold the phone - What? A Japanese Spider-Man television series? Yeah, that's right. As the internet rumors go, supposedly Japanese production company Toei and Marvel of America had an agreement which allowed both companies to use each other's entities however they saw fit. Apparently for the Japanese this meant having a Spider-Man character which also piloted a large mech named Leopaldon, and at times also sported a machine gun. Sounds kinda cool, don't it?

Based on Dex's post, and what I could find on Youtube - Which was a handful of episodes from the show, I had an itch which needed scratching. Fortunately I was able to find two related toys from the series which somewhat filled the void the television series now created. Check 'em out! 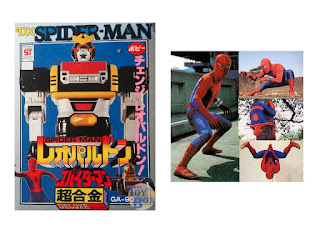 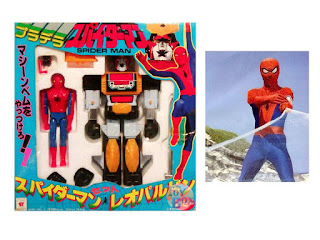 Supaidaman toys are definitely difficult to track down on Western shores, so if this is something you're looking for you're going to need to dig deep among your fellow collectors for any leads.

On a side note, Dex's site is now seven years old (as of July 13th). Stop by and give him a read, and wish him a lucky number seven.

Click "HERE" to go back to the home page. For more posts related to this one, please click the labels below.
Posted by The Toy Box on July 23, 2018
Email ThisBlogThis!Share to TwitterShare to FacebookShare to Pinterest
Labels: 1970's, Comic Book Toys, Japan, Marvel Comics, Popy Chogokin, Spider-Man, Supaidaman