...What doesn't know who this figure is based on this;

2 Minute Toy Break has been fueling my infinite desire for an A-Team BA Baracus figure not in just one, but two posts featuring this great plastic iteration of Mr. T from Galoob. Now that I finally have one of my own, I'll take a moment to clear up a mystery for him - If he hasn't already figured it out.

In his post from February 2016, Tony makes note of the back of the figure which reads, "Cannell Prod." and questions what this is. This refers to Stephen J. Cannell. As in Stephen J. Cannell and Frank Lupo, the creators of The A-Team. This is why you won't find on any of the A-Team toys with the Galoob logo as they're all credited to him / his company. This has lead many toy collectors to mistaken the company name on the back of the figures to be some form of foreign released equivalent.

As for the figure itself, love it! It captures all the greatness that was Mr. T in the 80's. Check him out! 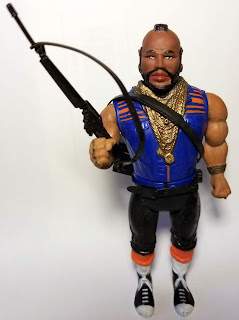 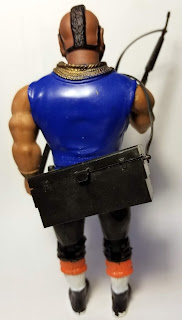 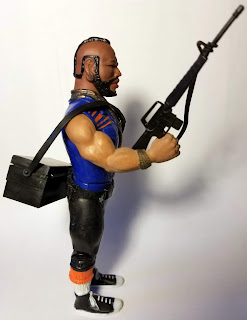 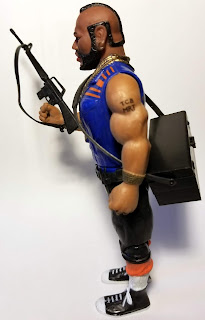 There are several facets I want to focus in on for this figure.

First and foremost, dig those socks! Only Mr. T could get away with this in the 80's. Mainly because he could destroy anyone who dared tease him about them. 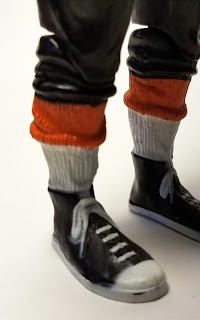 Second, love that tattoo! It can be a little bit of a challenge to find a figure where the tat hasn't rubbed off. This one looks perfect! T.C.B. Mr. T - Taking Care of Business Mr. T! 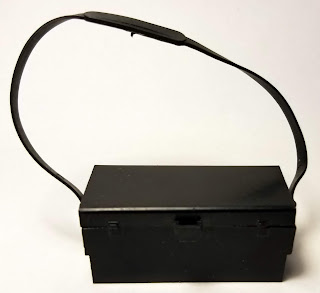 Galoob could have left it as a simple piece of plastic which did absolutely nothing beyond what your imagination could think of. Instead, they crammed it full of little plastic and commonly lost tools! 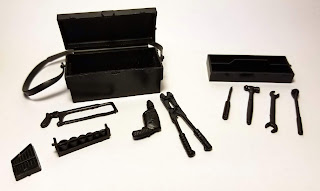 They even gave the figure an additional tool belt, but those were permanently sculpted in. The belt can be a challenge to get on and off of the figure, so I don't recommend removing it often (if at all). It is a very flimsy rubber which over time may break if handled too often. 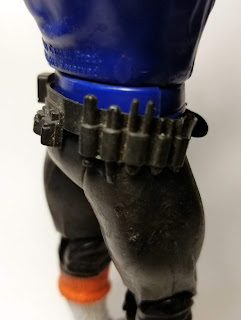 Last, they gave the figure an M-16 for all those awesome action gunfight scenes from the show where nobody ever got killed.

One of the biggest flaws in the figure are the knees which are prone to be wobbly in the joints. Mine unfortunately has this same issue. Fortunately a good quality action figure stand will rectify that issue indefinitely.

I've actually wanted the entire A-Team team members for a while now. Since I've broken the seal and finally grabbed BA, it's really only a matter of time before I grab up the rest.

Click "HERE" to go back to the home page. For more posts related to this one, please click the labels below.
Posted by The Toy Box on July 14, 2018
Email ThisBlogThis!Share to TwitterShare to FacebookShare to Pinterest
Labels: 1980's, A-Team, BA Baracus, Galoob, Mr. T