One of the perks of living overseas as a child in the 80's was having the opportunity to be exposed to many other artists from the era who weren't worldwide successes. One such artist was Monte Video and the Cassettes who sang the song Shoop Shoop Diddy Wop Cumma Cumma Wang Dang - Yup, that's all one title. Now as children we found the song catchy for all of its "silly" words, but what we came to find out as we grew older was that it was actually about a guy - Monte - who was at a bar one day getting hit on by a guy in drag.

Okay, not exactly child's material, but a fun song nonetheless and memorable too. So memorable that when I began piecing together my collection of '80's music I knew I had to have this album. The problem was it's not very common nor readily available. It was also never released on CD. It was so uncommon on secondary markets that I actually started looking online for ways to purchase the MP3's. Of course this too turned up nothing as Monte Video and the Cassettes wasn't exactly an album most people had. Beyond finding the song Shoop Shoop (not typing out the whole thing again), searches were futile.

That's when I decided to get more creative. Rather than look for the album, I started looking for the man himself - Monte Video, aka Murray Grindlay. Not only did I find him, but I also found a published e-mail address to contact him. So I did. 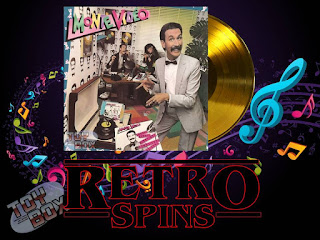 I politely introduced myself, told him about how his song was a big part of my childhood, even if I didn't know what it was about at the time. I thanked him for his contribution to the era and asked if he knew of any way I could get the album because I simply couldn't find it. You know what he did? He gave it to me - All six tracks in MP3 format. It was awesome! That was a few years ago and I still remember those few days chatting back and forth with him very fondly.

Well, I'm happy to say that eventually as time went by I also managed to put my hands on an official vinyl version of the album which brings us to today's Retro Spin. Yeah, sure. I've listed to the album numerous times since Mr. Grindlay gave it to me. But, now it was my chance to hear it in all of its vinyl popping glory.

It still stands up to time and feels all the more nostalgic on vinyl. Of course Shoop Shoop is the stand out track from the album, but I also love Who's Calling, Hypnosis and You Can't Stop Me Now. It's 80's synth pop at its best!

The song Shoop Shoop Diddy Wop Cumma Cumma Wang Dang is still a great memory from my childhood. However, now I can also look back on my adult years and say, "Remember the time I actually spoke to Monte Video and he gave me the album personally?" I doubt I'll ever have another experience like that in my life.

These days Murray doesn't produce albums under the Monte Video moniker. Instead, he  spends a lot of his time writing jingles for commercials. You can check him out at his current site, HERE!

Click "HERE" to go back to the home page. For more posts related to this one, please click the labels below.
Posted by The Toy Box on July 31, 2018
Email ThisBlogThis!Share to TwitterShare to FacebookShare to Pinterest
Labels: 1983, 80's Album Review, 80's Music, 80's Music Review, Monte Video and the Cassettes, Murray Grindlay, Music of the 80's, Retro Spins