I'm honestly surprised the album Spanish Fly only had two hits from it. The May 1987 entry from Lisa Lisa and Cult Jam wasn't the bands first time to see chart success nor would it be their last. Which is why it's surprising that the band is really only known for two hits - Lost in Emotion and Head to Toe - Both of which charted in 1987.

Head to Toe hit the charts in April of '87 and from there skyrocketed to the number one spot by June. As it worked its way back down the charts, it was met in August by the albums second single, Lost in Emotion. Emotion too went straight to the top, hitting number one in October. 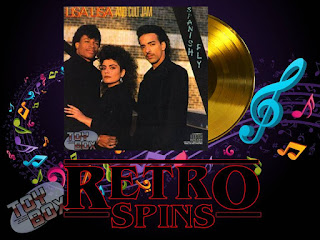 The success of the two tracks didn't help any of the other songs from the album, but rather pushed a prior hit back onto the charts - Someone To Love For Me (for at least one week). However, this is kind of baffling to me as the whole album is one fantastic song after the next - Sort of. There are some duds in there.

In fact, I liked the album so much I quickly looked up their prior and latter albums from the 80's and nabbed them both off of ebay. If the other two play as great as this one did, I'll consider grabbing their final album from 1991. I know, I know - Why not just buy it now and have them all? I have such an aversion to albums from the '90's. For some reason I automatically attribute them to being bad - Regardless of who the artist is.

Initially my IPOD only had two tracks on it, and if you've read this post up until now, you know what they are. However, after listening to it today for Retro Spins, I now have six of the ten tracks in my shuffle, and to give you a little insight, two of the four tracks that didn't make the cut are only (less than a minute) snippets of talking.

This is going to be an album I highly recommend to people who ask me for obscure 80's albums.

Click "HERE" to go back to the home page. For more posts related to this one, please click the labels below.
Posted by The Toy Box on July 17, 2018
Email ThisBlogThis!Share to TwitterShare to FacebookShare to Pinterest
Labels: 1987, 80's Album Review, 80's Music, 80's Music Review, Lisa Lisa and Cult Jam, Music of the 80's, Retro Spins, Spanish Fly