We touched on V in general back in 2012 in our post about LJN's toy line, quite honestly there isn't a whole lot more that we can say about the series in general that we didn't already touch on there.

In 1983, Arco toys produced a line of their own toys based on the series. Much like prior products before this particular series, the products were simply re-used molds of existing lines that the company had churned out in the past, and would use again many more times in the future. However, this doesn't mean it was of poor quality.

Arco was one of the well known toy companies for making toy guns, and they did a fantastic job on them. Mind you, this was back in the day when kids could play toy guns out in the middle of the street without fear of something going horribly wrong. 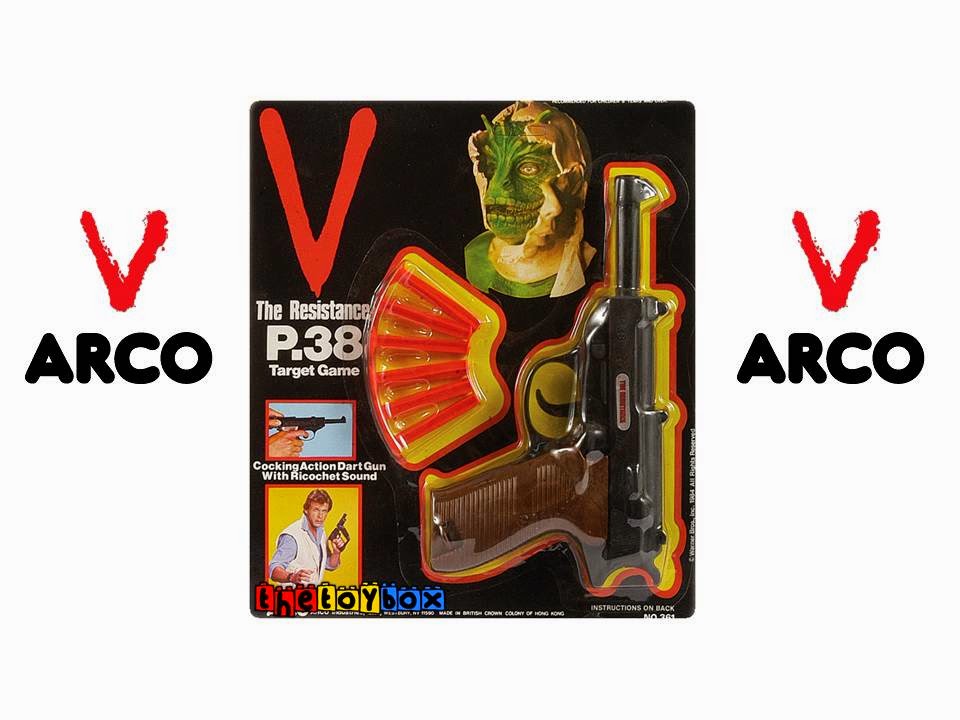 The first pistol was the P.38 rubber dart gun. It came packed with six darts, which could be loaded and fired one at a time...Which would then end up lost for years beyond the time that you actually owned the gun, and then one day you would mysteriously find them behind your parent's couch - Even though you looked there like a hundred times before giving up.

The sculpt of the gun is pretty spot on to that of a real Walther P.38 of the times - A gun very popular with the German's in World War II - Toys and history together! Fun! 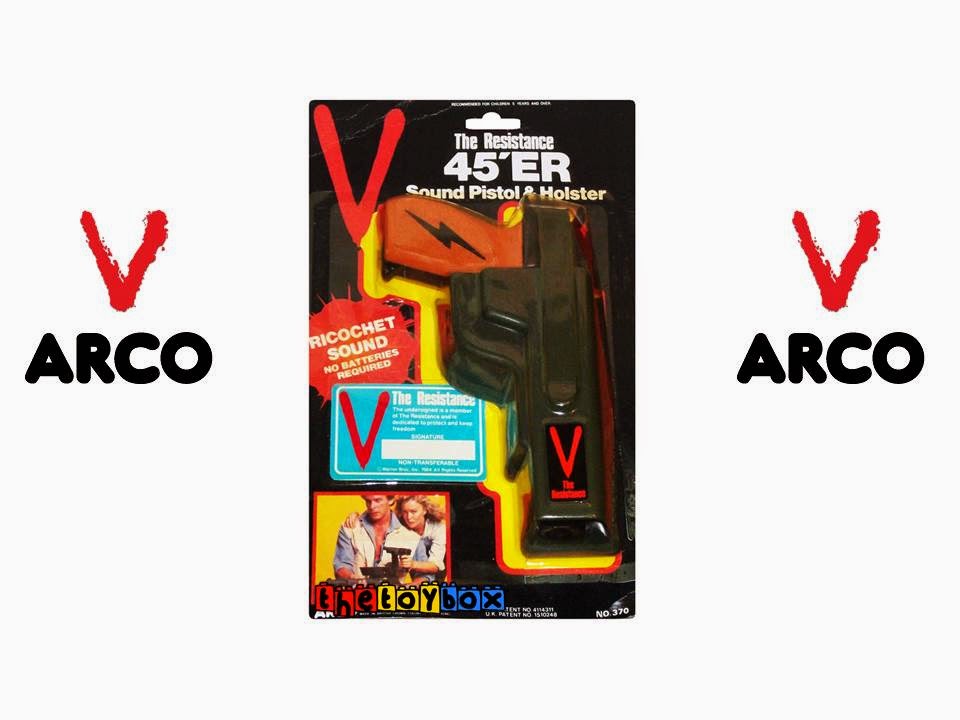 The second gun was the 45'er. It had a fantastic gunfire and ricochet sound effects, and best of all didn't require batteries to use. This particular gun also came with its own holster which could be attached to your belt. It also came packaged with your own membership card for the Resistance.

A second version of the gun, known as the Action Set, was released the same year which included the weapon and holster as well a pair of binoculars and a grenade. It's the most difficult of the two versions to find, and sadly we couldn't locate one in time for this post.

No matter which of either of the guns above that you're after, it's important to be cautious when buying them loose. As we stated above, Arco utilized these same sculpts many times over for numerous toy lines, and it's very easy to be duped into thinking you're buying the V ones when instead you're buying a Rambo or A-Team one. Because each brand is only distinguishable with the stickers that were adhered to them, it's typically best to hold off for one in the package to ensure you're getting what you're looking for. 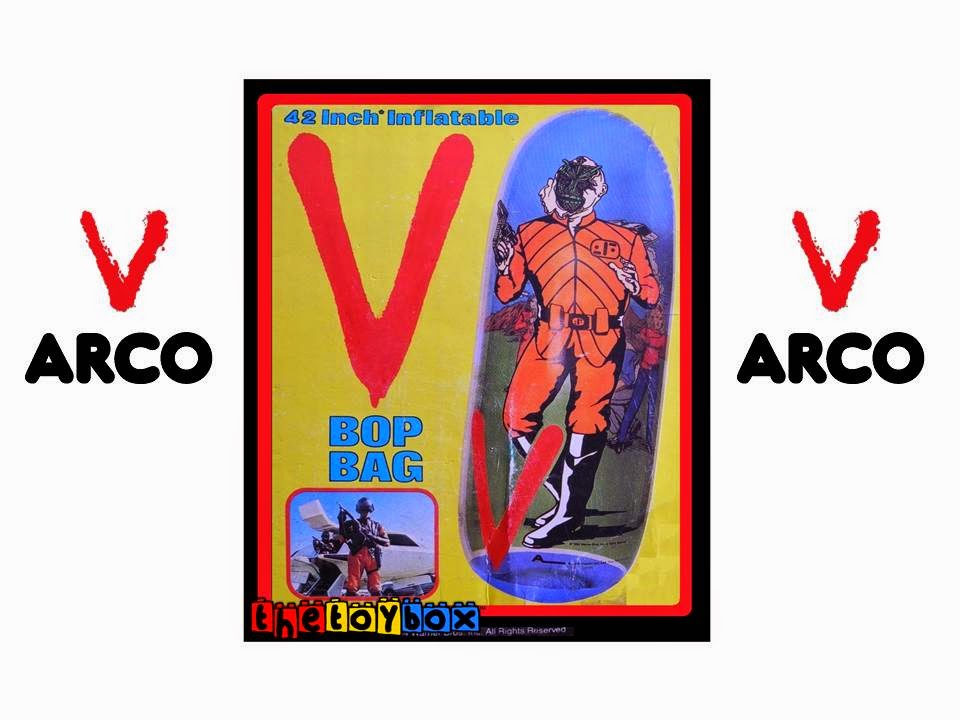 In addition to toy guns, Arco was also fond of producing Bop Bags. For those of you unfamiliar with these incredibly popular 80's toys, it was essentially an inflatable punching bag for kids. This particular version showcased a Visitor with most of his lizard face exposed under torn skin. Gruesome, yet so awesome at the same time!

If there was one drawback to any brand of Bop Bag from this era, it's that they're all incredibly fragile, and prone to puncture around the seams. As such be careful about how hard you slap yours around as you may inadvertently end up popping it - Which would just be a downer.

The last item was the Defender Rifle Target Game Set. This was a fantastic rifle for its time, featuring several projectile darts that you would fire into the cardboard target on the back of the box. 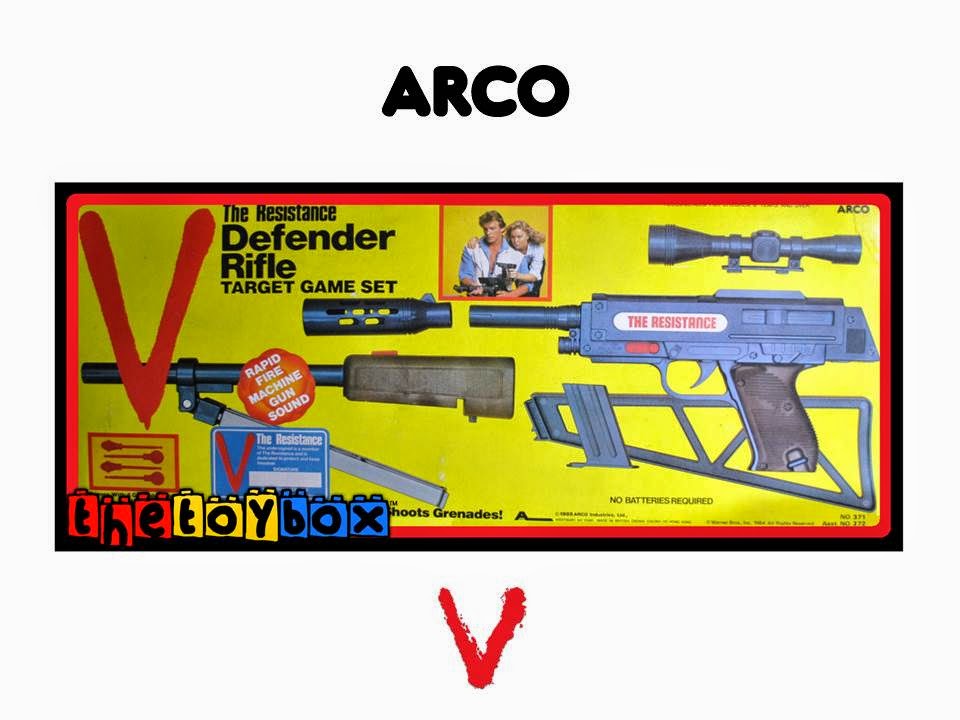 Toy guns were such a blast when we were growing up, and it's a real shame that a lot of kids these days are missing out on them. I guess we've reached that age where just like our parents, we can look back and say, "Sigh - Those were the good old days."

Join us next time when we take a look at Wizard of Oz!

Click "HERE" to go back to the home page. For more posts related to this one, please click the labels below.
Posted by The Toy Box on January 15, 2015
Email ThisBlogThis!Share to TwitterShare to FacebookShare to Pinterest
Labels: 1980's, Arco, Toy Gun, V, V The Final Battle, V The Resistance