Ninja Turtle fans rejoice! New figures have hit store shelves, and though they're a little difficult to get your hands on them during their initial release, rest assured that they'll soon be in abundance.

The basic series contains the all new Tiger Claw and Robotic Foot Soldier, while the all new sub series includes the original comic book versions of Michelangelo, Leonardo, Donatello and Raphael.

As it has become typical in this series, most of that great detail in paint on the figures and vehicles is lacking in the actual retail versions vs. the production photos provided by Playmates Toys. We know this is something that has turned a lot of people off on the series. 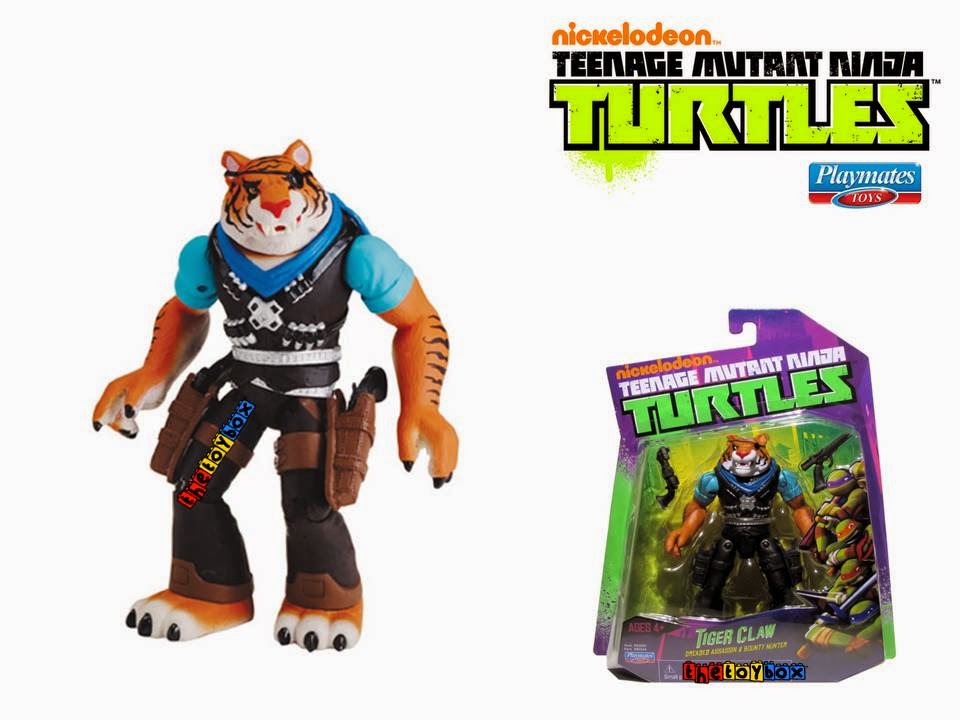 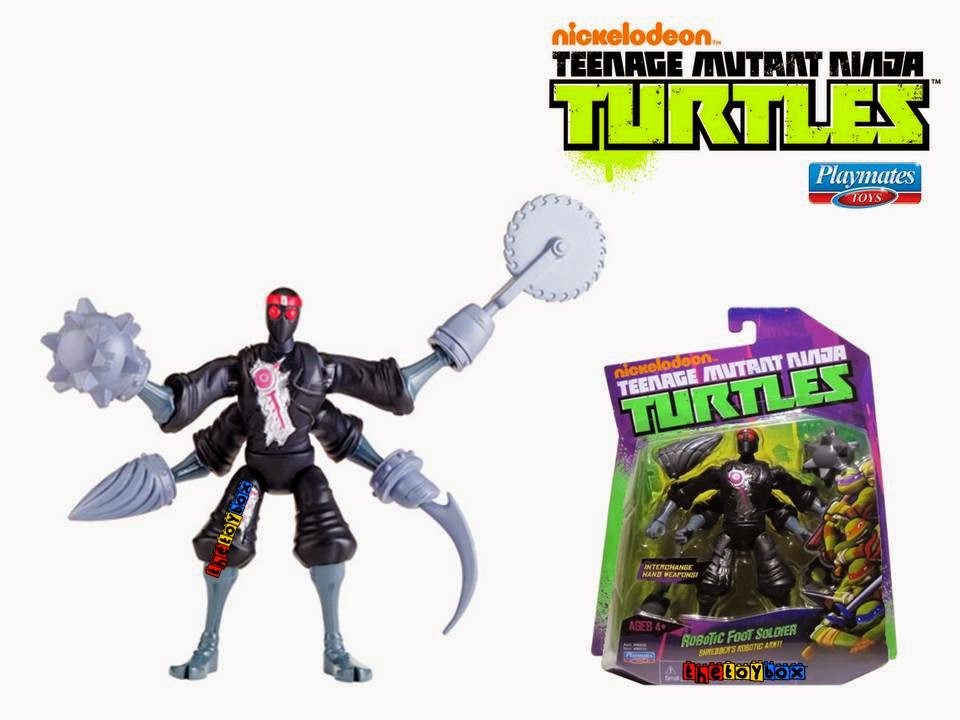 Robotic Foot Soldier
﻿
***UPDATE***
We've found a variant! Hooray? Variant hunters should be on the lookout for a very subtle variant in the Robotic Foot Soldier. The emblem on the red bandana on his head has been found in both shiny silver and dull light gray. It's a minor one, but probably enough to excite some variant hunters. The bigger variant is that the silver emblem figures come on cardbacks that have the words "Interchangeable hand weapons!" Printed on the bottom left of the card. The gray ones don't have the printed text, but rather a sticker that says it. The sticker is to the left of the right leg.﻿ 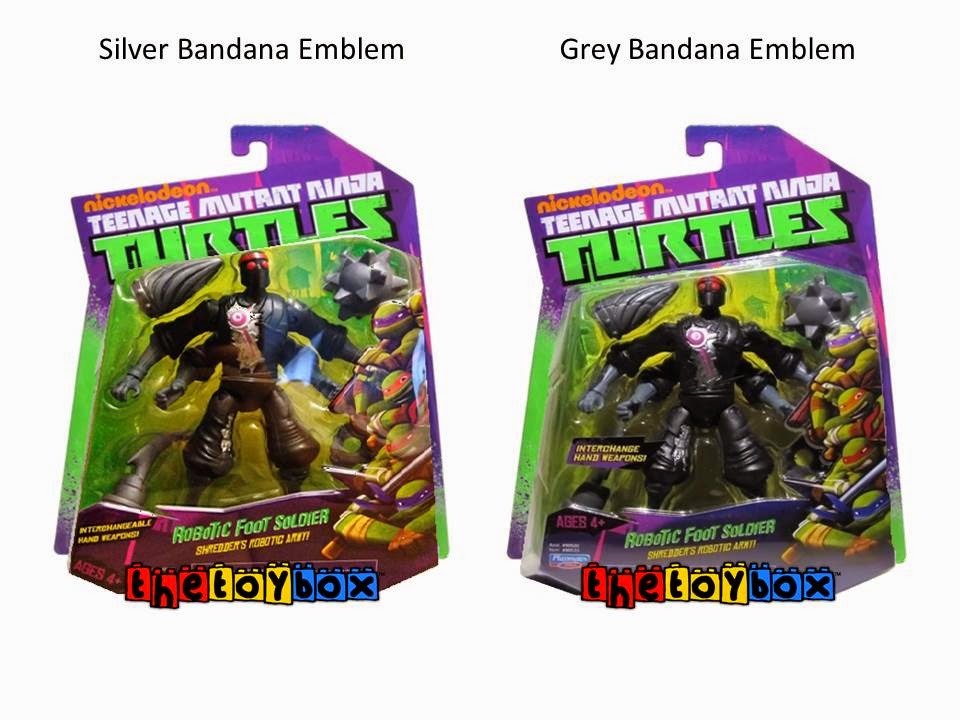 Fans of the original TMNT comic book series will be excited to own these all new figures based on the comic. It's been a series that we've waited thirty years For Playmates Toys to get around to doing. Hopefully they'll continue with figures like these, bringing us all sorts of original renditions of our favorite characters. 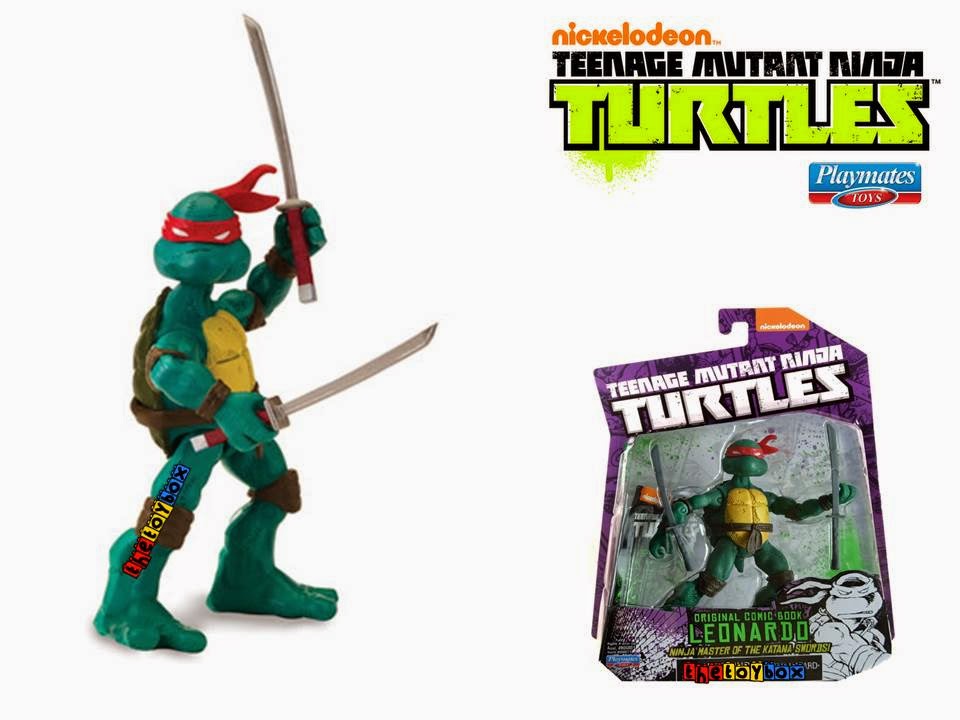 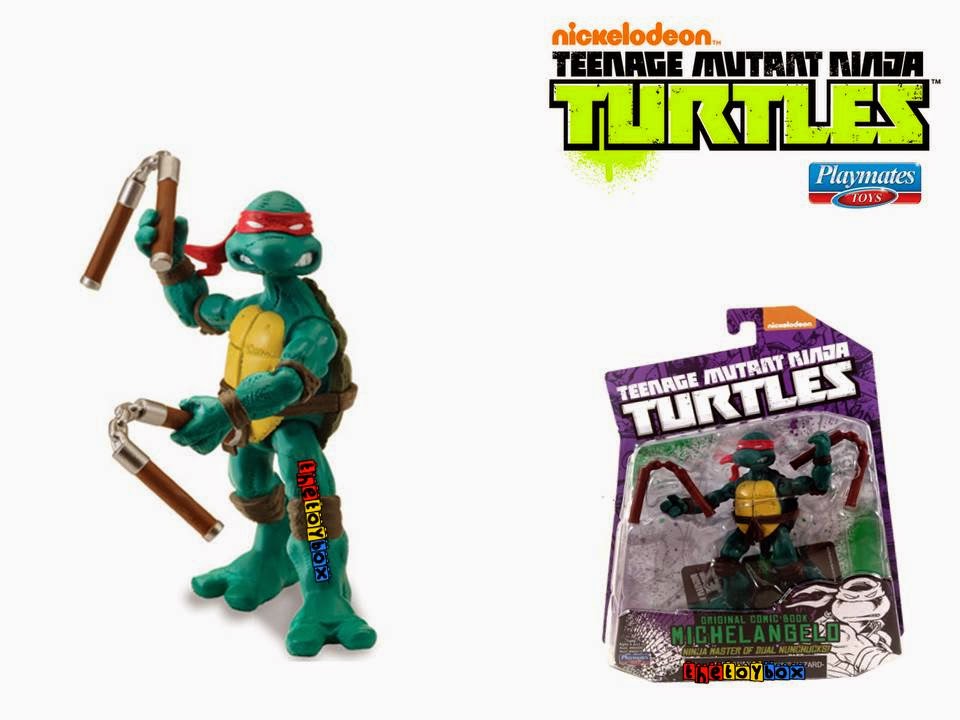 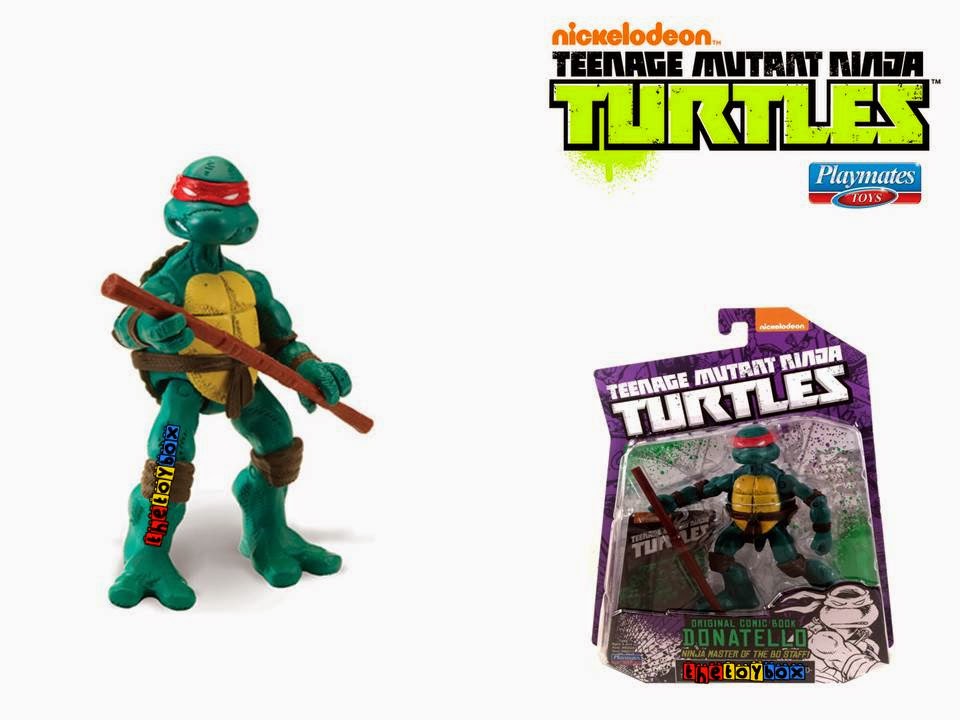 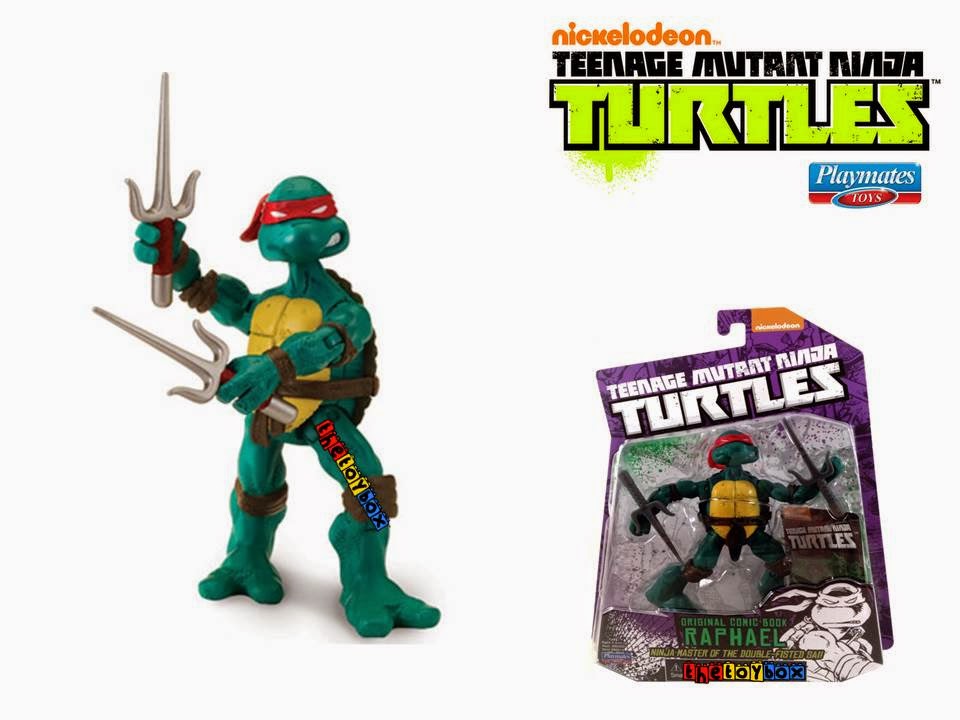 Original Comic Book Raphael
Finally the long awaited Shell Flyer is on store shelves. This one actually hit last month, and is definitely easier to find than the figures.
In addition, the all new Hot Rod with Hot Rod Mikey was released in August of this year, but is just now being more abundantly released around the USA.
﻿ 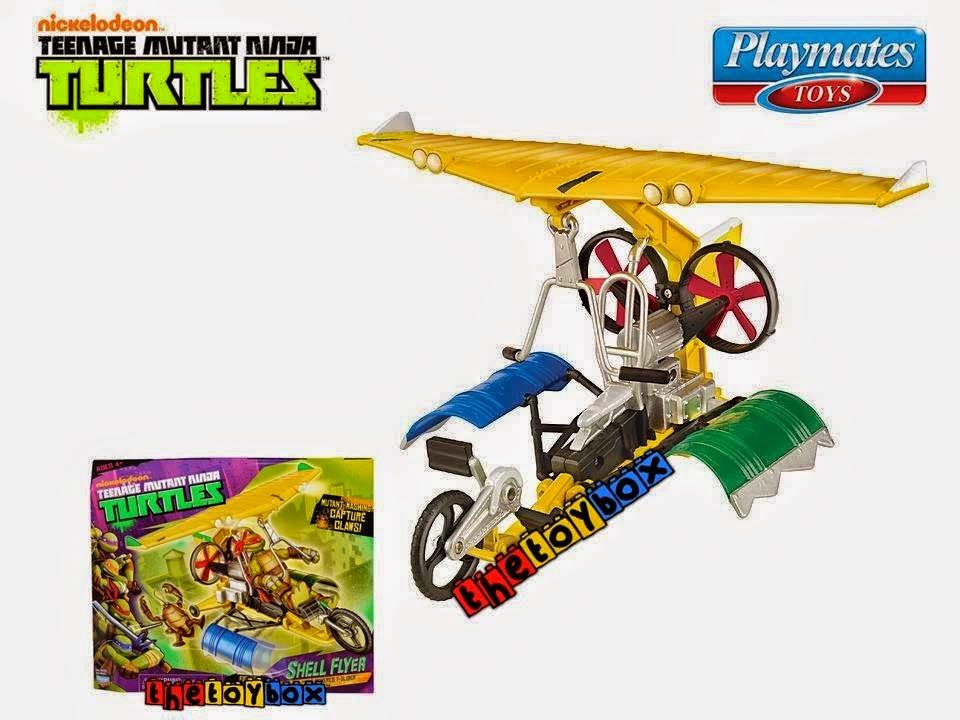 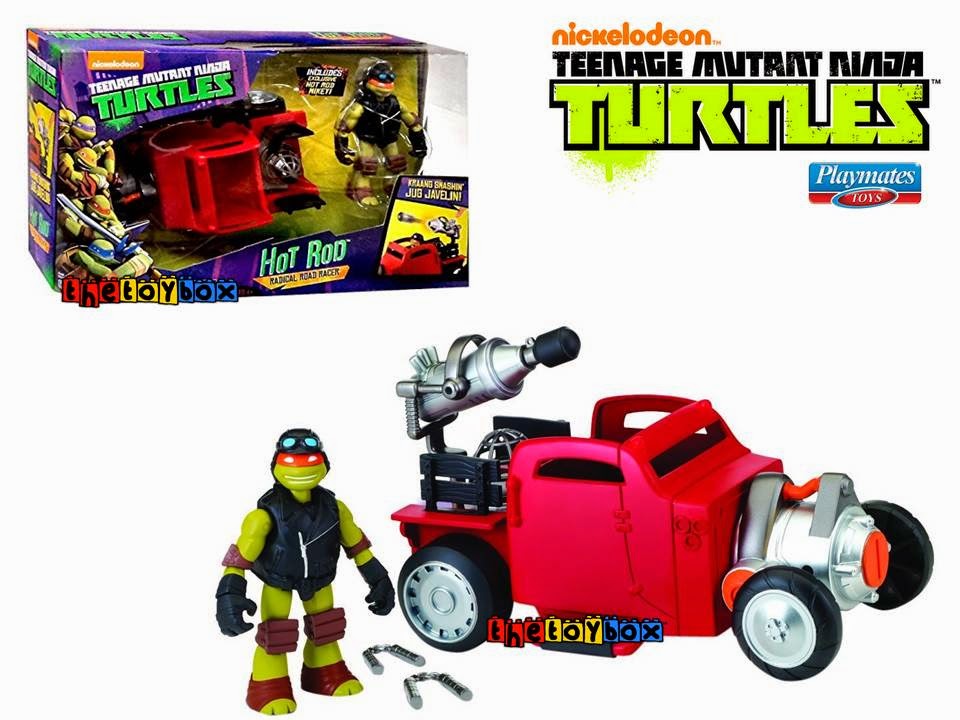 Hot Rod with Hot Rod Mikey
Fans of the RC Shellraiser will be happy to see two additional vehicles released with RC features - Leonard's RC Patrol Buggy and Raphael's RC Patrol Buggy. What's odd about these vehicles is that many websites such as Toys R' Us are advertising the Raphael buggy, but not Leonardo's.
﻿ 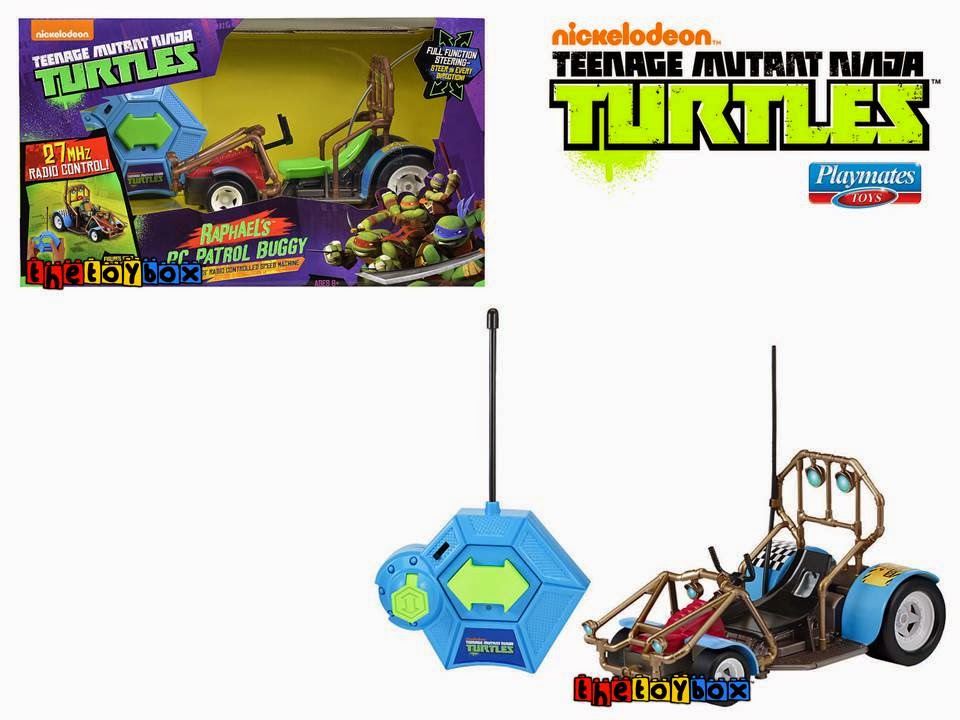 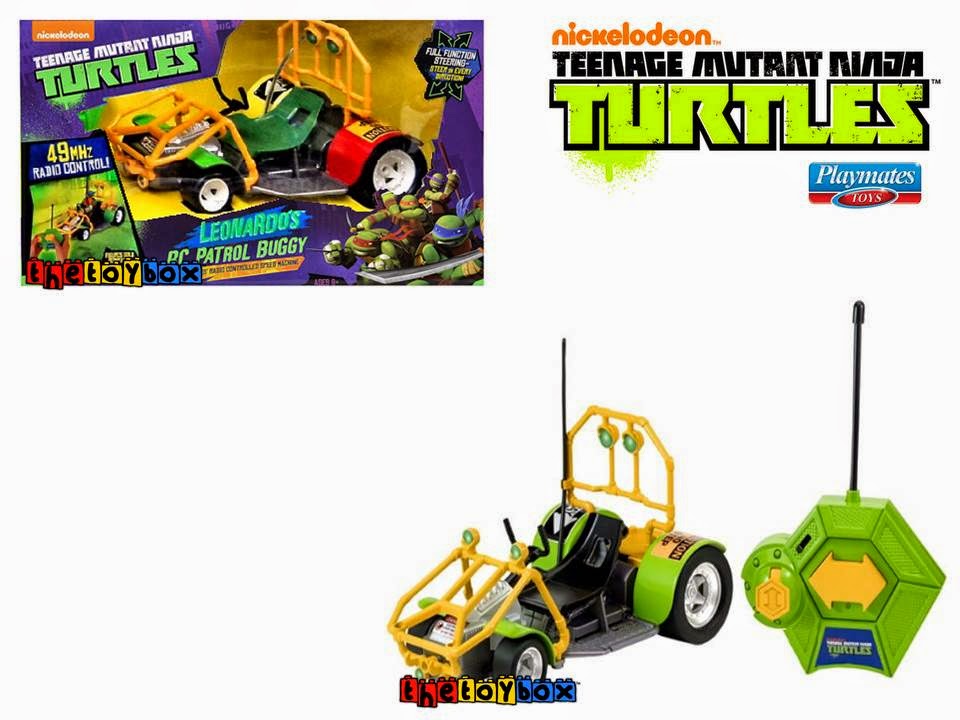 Leonardo's RC Patrol Buggy
***UPDATE***
Those of you interested in buying the same figures again should jump on the opportunity to nab the Target exclusive 3 Pack Exclusive Leonardo. It's essentially a package that contains the 2014 Original Comic Book Leonardo, the 2012 Nickelodeon's Teenage Mutant Ninja Turtles Leonard, and the recent 30th anniversary re-release of the 1980's Leonardo.
At $27.00 (online price) that's not a price point that leaves us eager to jump at a collection of figures we've already got. Not only that, but with how often most retailers put their TMNT figures on sale for either $7.99 each or buy one get one 50% off, it's not like you couldn't track down all three of these figures individually for much cheaper. So what's the incentive here? A cardboard box?
If this is a must have item for you, then you can find it at your local Target soon, or now at their online store "HERE". 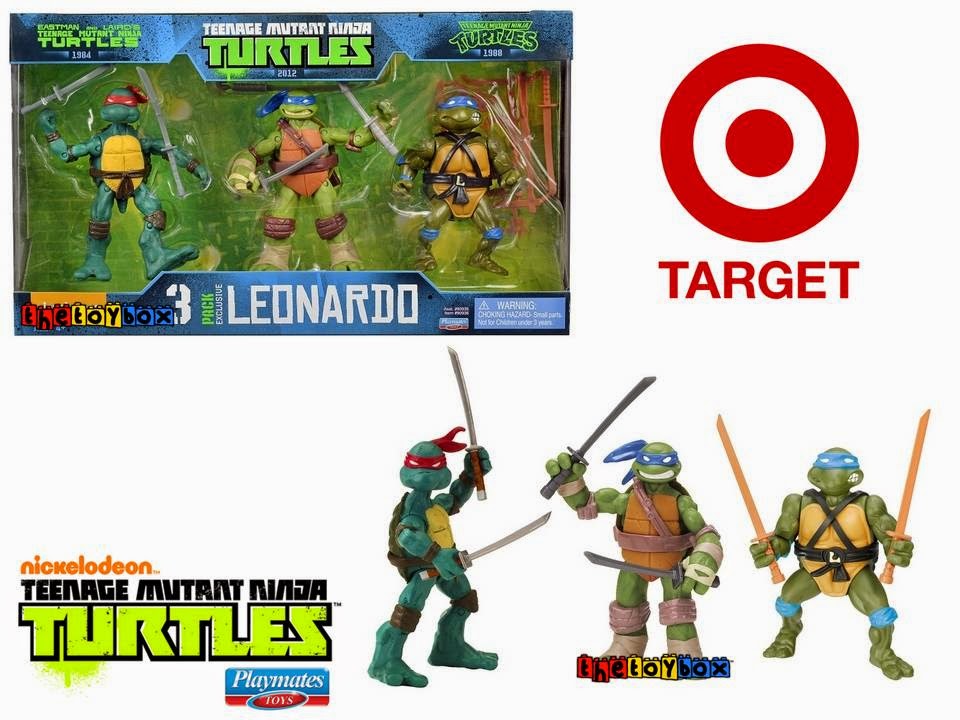 Toys R' Us have also released their Original Comic Book versions of Leonardo and Michelangelo that come packed in with their original 1980's micro series comic book. At $14.99 we were hoping that all that great detail and paint would have been added back in to the figures. Sadly, it's just a repackaging of the already released figures with the comic book. Considering you can pick up the figures individually for as little as $8.99, we're having trouble justifying the comic book and new packaging being an additional $6.00. We get that Playmates Toys is trying to pull in adult toy collectors, but it just seems as if they're going about it the wrong way. 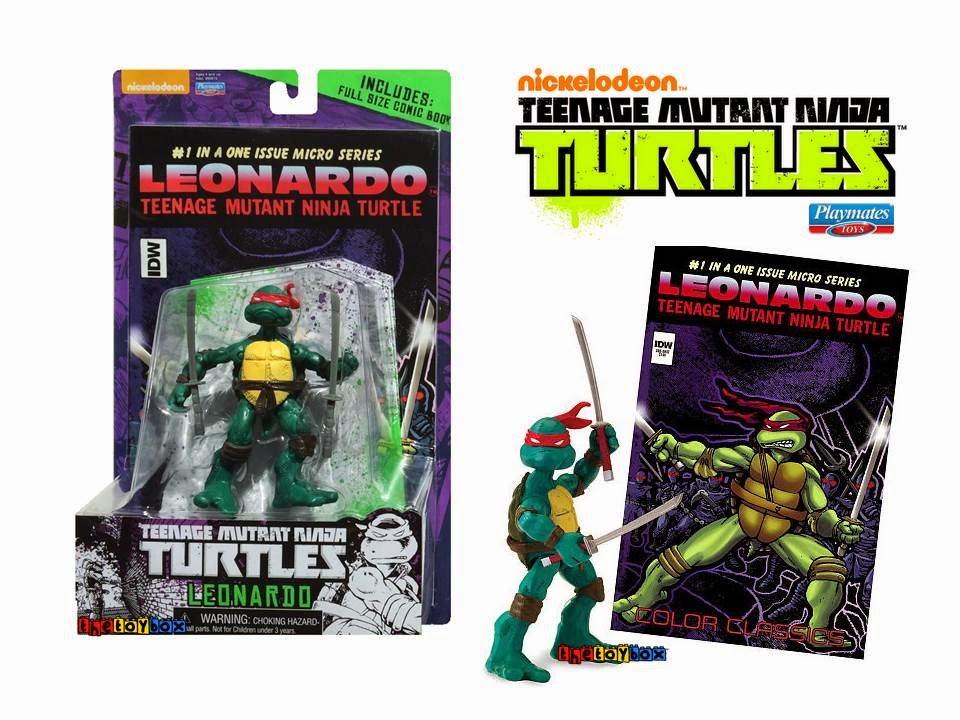 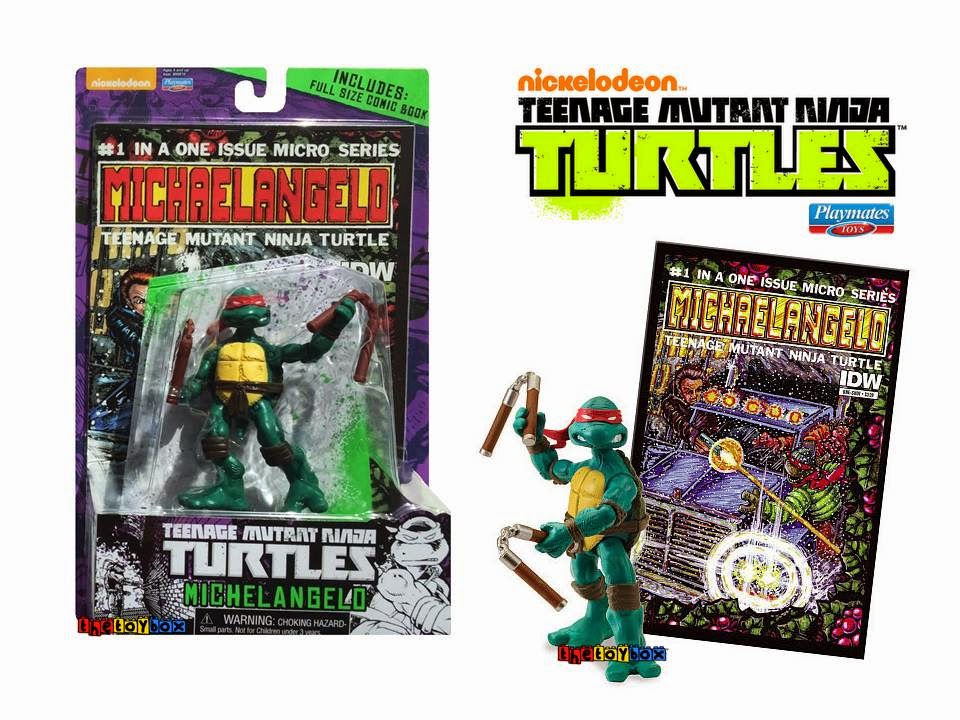 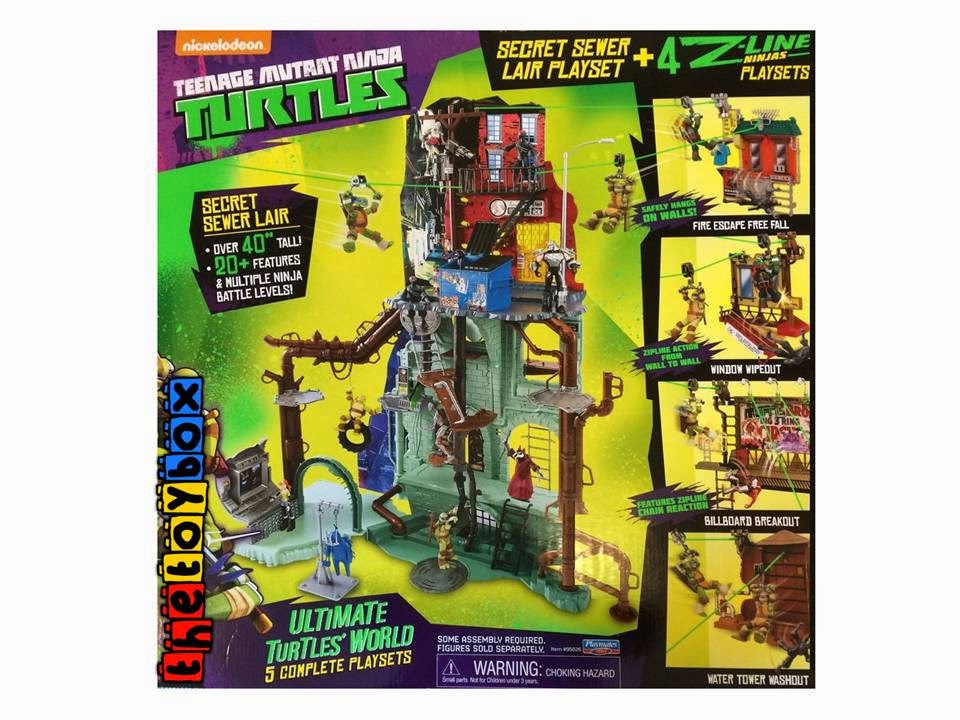 Toys R' Us has also released an exclusive MASSIVE box called Ultimate Turtles' World. The box is huge in size, and equally matched with a gigantic price tag of $199.99. Don't get excited just yet. It's nothing more than the Secret Sewer Playset boxed with all four of the Z Line playsets (if you can even call those playsets).Here's the catch - You're actually paying slightly more if you buy this set vs. the individual pieces.

As we said above, the set retails for $199.99. However, the Secret Sewer Playset retails for only $99.99. The Z Line playsets vary in price depending on the size you get. The two larger sets retail for $29.99, and the smaller sets are priced at $19.99. Total for all five pieces separately - $199.95. Now take into consideration that these are often found on sale, and this set suddenly isn't all that appealing. The massive size of the box surely does have wow factor, but are you getting your monies worth investing in it? Not really.
We're not sure if this is a Christmas exclusive to the store or if it will be a mainstay on shelves. It's probably safe to say that parents will take the plunge either from not really knowing what it is or simply because they have the means in their pocket to spoil their kids.
Photo of Ultimate Turtles' World provided by fantasyfriends14.
Last up for retail releases is the all new carry case. This particular version may be disappointing﻿ to fans as it doesn't have any slots or trays for actually holding figures. It's essentially a hollow box that you would "throw" your figures into a pile in. 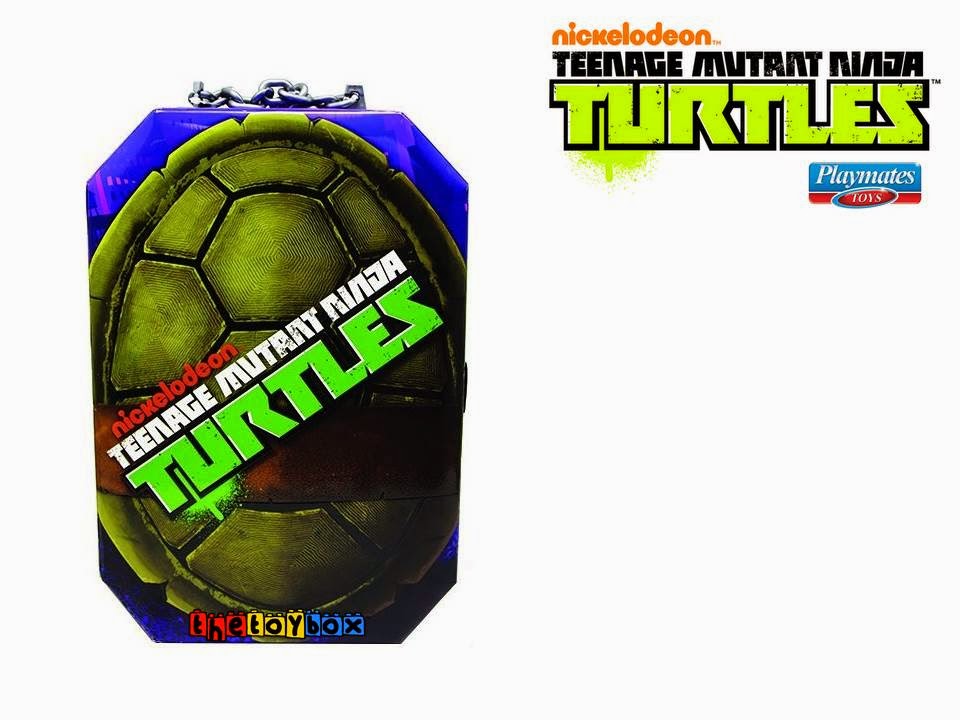 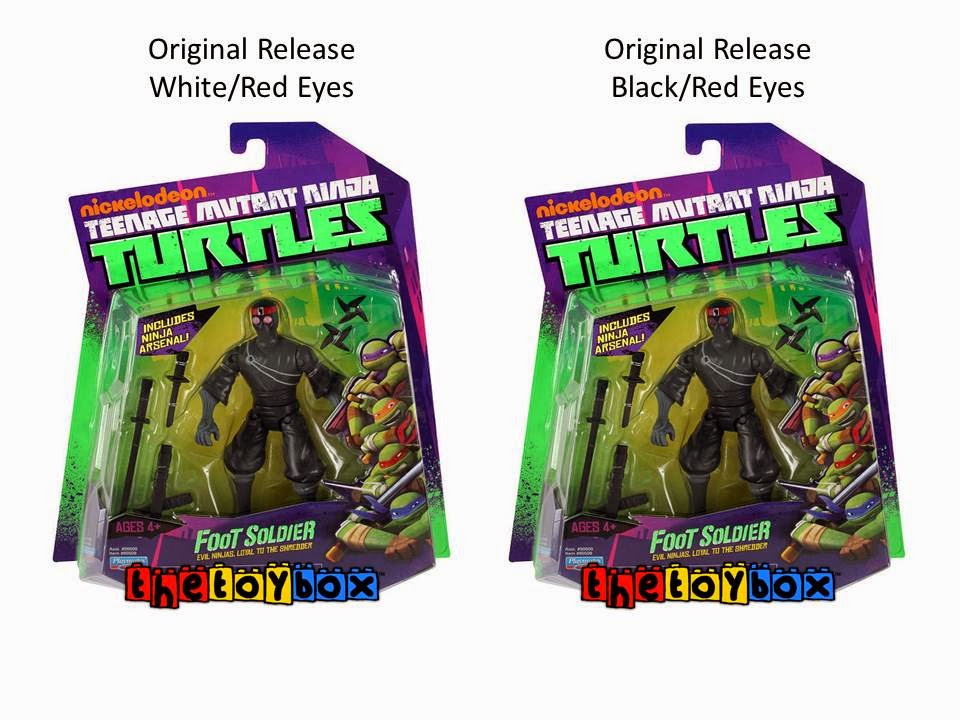 The all new SDCC exclusive black and white Raphael which was released at this year's San Diego Comic Con is one amazing figure both in detail and fan appeal. It was a great teaser for the upcoming sub series of comic book Turtles, and makes an excellent addition to any fan's collection. Of course you won't find these in stores anywhere, so ebay is going to be one of your few options for nabbing this figure now. 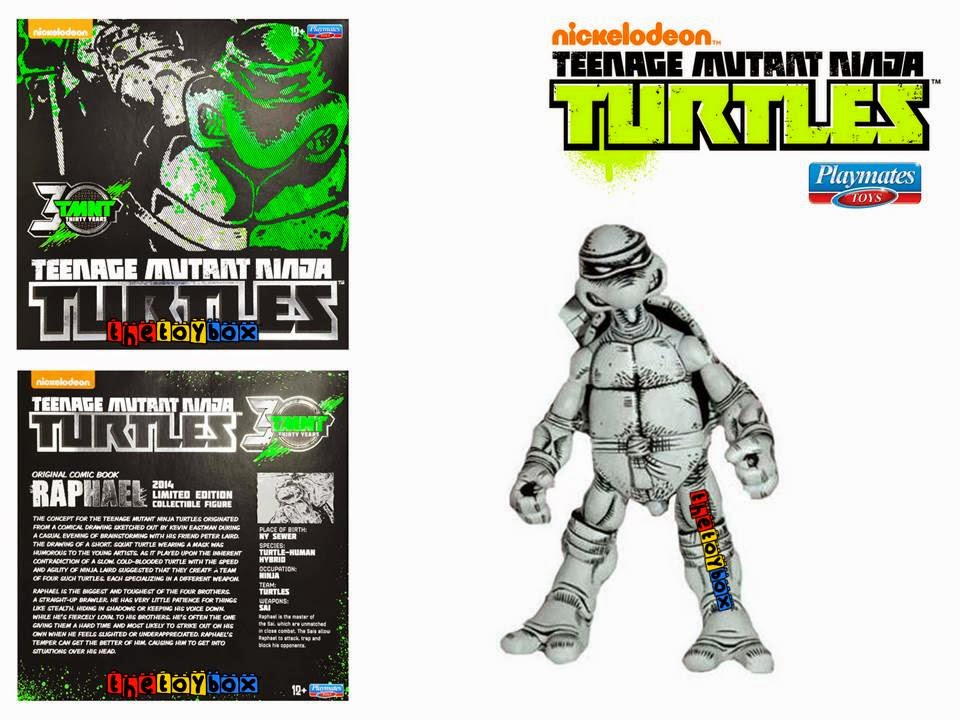 Happy hunting Turtle fans!
Click "HERE" to go back to the home page. For more posts related to this one, please click the labels below.
﻿
Posted by The Toy Box on October 18, 2014
Email ThisBlogThis!Share to TwitterShare to FacebookShare to Pinterest
Labels: 2010's, Nickelodeon, Playmates Toys, Teenage Mutant Ninja Turtles, TMNT