I tried so hard to make it through this movie, but it's just so awful. Low budget B movie cheese from start to finish. The only saving grace to the film was the first five minutes, which featured the music video to the song When The Rain Begins To Fall by Pia Zadora and Jermaine Jackson. 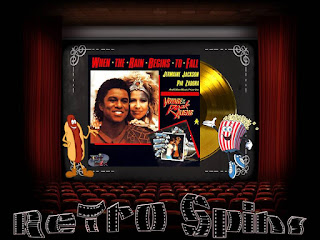 A guitar-shaped spaceship streaks through the skies in search of the origins of rock n' roll and lands in the town of "Speelburgh," U.S.A. Led by Absid (TOM NOLAN), the alien crew (RHEMA) is just in time to play at Heidi High's school dance on Saturday night. Frankie (CRAIG SHEFFER) and his band of bullies, the Pack (JIMMY AND THE MUSTANGS), are not too eager to share the stage and a battle of the bands breaks out!

It's galactical laughter and cosmic chaos as Dee Dee (PIA ZADORA), Frankie's girlfriend, pursues a singing career with the alien rockers, Absid puruses a close encounter with Dee Dee, "Chainsaw" pursues a well-tuned tool and the sheriff (RUTH GORDON) is hot in pursuit of the musical invaders. Beam yourself aboard for the funniest, most entertaining musical comedy ever launched. - Back of the original VHS.

First off, FALSE! The most entertaining musical comedy ever launched was Morons From Outer Space. That film is a classic!

Second, much like the film, the only saving grace to the soundtrack were the first five minutes which featured the song When The Rain Begins To Fall by Pia Zadora and Jermaine Jackson.

The album is chalk full of throw away songs, and over saturated with Pia Zadora tracks. Frankly, the woman can't sing, which is surprising since she does such an amazing job on her duet with Jermaine.

If there was one reason to get this soundtrack, it would be for that song alone. I mean, look at the cover. Their photo takes up more space than the actual title. The producers knew this was the only selling point here. However, considering the rarity of this particular album, and the increased price that comes with it, as I said in my post of Ms. Zadora's solo album, there are cheaper route and better albums to find this tune on.

Having this in my collection will definitely be for nothing short of a conversation piece, as I don't see myself ever listening to it again.

Click "HERE" to go back to the home page. For more posts related to this one, please click the labels below.
Posted by The Toy Box on June 30, 2020
Email ThisBlogThis!Share to TwitterShare to FacebookShare to Pinterest
Labels: 1984, 80's Album Review, 80's Music, 80's Music Review, Jermaine Jackson, Music of the 80's, Pia Zadora, Retro Spins, Voyage Of The Rock Aliens