Pia Zadora's album, Let's Dance Tonight, felt like I was being handed the demo tape of a sixteen year old back in the 80's. The songs were terrible, and many of them were vocally out of tune. To say Ms. Zadora can't sing is being polite. Which is odd, because on the opening track, and the only reason the album ever sold one copy, she sounds really amazing. 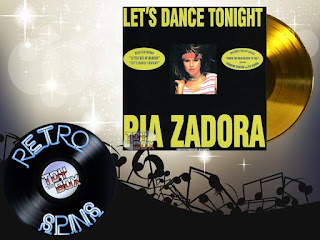 The track I'm talking about is the duet with Jermaine Jackson, When the Rain Begins to Fall. Truth be told, the version on the album isn't even the good one. It's extended well beyond it's need (running time wise) and mixed to the point where you can very much so hear the cuts, which are almost pausing in a way to the song as it reverts back to some form of instrumental intro. No, the far superior version is that which can be heard in the music video and on the two albums, Voyage of the Rock Aliens (soundtrack) and re-released version of Jermaine Jackson's Dynamite (known as Jermaine Jackson in the US).

So what exactly does this album have going for it?

Nothing. Absolutely nothing. It's terrible. Worst of all, it's expensive. A CD version can cost you anywhere from $30.00 to $100.00, depending on which pressing it is.

Really the only reason people wanted this album back in the 80's was because of the duet, and quite frankly, if they buy in on the album these days, they're going to find an extended almost dance remix of the track which is far inferior to that of the shortened version. Proof positive more doesn't equate to better.

You're much better off buying the more affordable and overall better album from Jermaine Jackson for the track.

Click "HERE" to go back to the home page. For more posts related to this one, please click the labels below.
Posted by The Toy Box on September 03, 2019
Email ThisBlogThis!Share to TwitterShare to FacebookShare to Pinterest
Labels: 1984, 80's Album Review, 80's Music, 80's Music Review, Jermaine Jackson, Let's Dance Tonight, Music of the 80's, Pia Zadora, Retro Spins