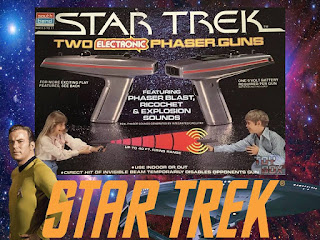 It's the first toy to utilize infrared technology, and it just so happens to also be a Star Trek product. Before there was the Nintendo Zapper, Lazer Tag or Captain Power and the Soldiers of the Future, there was Star Trek Electronic Phaser Guns.

Much like Lazer Tag, the object was to shoot at another live player. However, rather than aim for a target disc on their chest, you had to instead disable the other player's phaser with a well placed shot. This was thanks to each gun having a beam emitter and receiver, alleviating the need for any further devices. It also made the game a bit more challenging.

The set was produced in 1979 by South Bend, a company which actually got its start by producing croquet mallets and balls back in 1874. It continued to thrive in the doll accessory business with items such as carriages, wagons, rocking horses and other wood based toys throughout the latter 1800's, becoming most noted for its "Willow" brand. In 1960 the company became a wholly owned subsidiary of Playskool, which was then obtained by Milton Bradley in 1968.

South Bend was a family company which was the home of upwards of 400 employees, some of which were second and third generation workers.  Their story ends with a sad tale of what happens when you export everything overseas for manufacturing. By the 1980's, the company was suffering from the cheaper products which were being produced and shipped to the USA from abroad. South Bend prided itself on American made, quality toys, but business was business to Milton Bradley and dimes were dimes. They decided it was time to cease all production and close the doors in 1985.