Rocky IV was the first film in the series I ever saw, and truthfully was the only one in the 80's. It wouldn't be until the 1996 20th Anniversary VHS box set that I would get to see any of the other films. Keep in mind, at that point, there's were only five of them and no plans to continue the series. 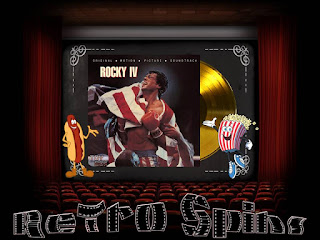 Sylvester Stallone, Talia Shire, Burt Young and Carl Weathers score a knockout success in the fourth "Rocky" blockbuster, written and directed by Stallone. With more than 75 fights behind him, these days Rocky Balboa is more interested in piling up points with his family than KOs in the ring. Then he meets Ivan Drago (Dolph Lundgren), the silent, simmering "Siberian Express." A savage Russian fighting machine trained and honed to physical perfection by Soviet technology, Drago is a towering juggernaut who proves his super-human strength and heartless brutality in a devastating, tragic match against Apollo Creed. And so Rocky faces his greatest challenge ever, as he climbs into the ring against Drago, each determined to destroy the other while the entire world watches and waits...Tense, touching, tough and right on target from beginning to end, Rocky IV is and odds-on winner! - Back cover of the original VHS

Though it does have some duds in between the classics, there are six tracks out of the eleven which remain a staple for me in my iTunes and iPod rotation. Burning Heart, Hearts On Fire, Eye Of The Tiger, Living In America, No Easy Way Out and the instrumental Training Montage are timeless classics in my book. War / Fanfare From Rocky, another instrumental track, isn't terrible, but it's also not something I would actively listen to. The rest of the tracks are a hard pass.

I do enjoy the fact that Eye Of The Tiger, which was essentially the theme song to Rocky III, makes an appearance on this album. Mainly, because it means I don't have to bother tracking down the Rocky III soundtrack, which consists of mostly instrument tracks by Bill Conti. Though maybe I should since I do enjoy some of his work, such as, The Karate Kid (I and II), Masters of the Universe, and...well, that's actually about it. He did also do all the other Rocky movies.

Overall, this album is one where I love some of the songs (as mentioned above), but can't really stand the rest of them. Thank goodness I'm not bound to a cassette version anymore, having to fast forward and rewind to the ones I want to hear.

Click "HERE" to go back to the home page. For more posts related to this one, please click the labels below.
Posted by The Toy Box on January 28, 2020
Email ThisBlogThis!Share to TwitterShare to FacebookShare to Pinterest
Labels: 1985, 80's Album Review, 80's Music, 80's Music Review, Music of the 80's, Retro Spins, Rocky, Rocky IV