For those of you who recall, I got the 3rd edition of Mark Bellomo's tome on G.I.Joe figures for Christmas last year. You know, that holiday that was just last week. Well today, I thought I would give my thoughts on the book.

With three versions, or prints if you will, now in the mix, what exactly is Mark offering that this book is consistently being produced? Why do we need a third edition? 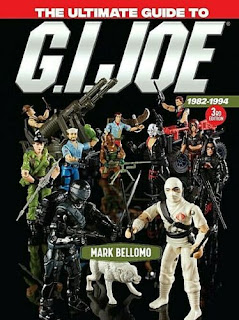 I suppose, first and foremost, considering volumes one and two are now out of print, a third edition offers new collectors an opportunity to get this guide at a much lower price than what you'll find on secondary markets. Further, this print offers a nice hardback cover. Where as prior editions were in paperback format. This in and of itself might make it far superior. If for nothing else, the durability of it.

Additionally, it's a convenient way to relive childhood memories without investing a small fortune. One figure can easily set you back the thirty-five dollars you're going to pay for this book (for now).

Layout wise, it's done so by year, noting all the toys associated with that particular era. While this keeps the book consecutively organized, it creates a problem of its own.

Unless you know the year a specific toy was released, casual fans or new collectors may not be able to quickly find and reference what they're looking for. Instead, they're going to be thumbing through page after page until they find it. An alphabetical index for quick reference to the appropriate page(s) would go a long way in this book.

What doesn't make sense to me is the inclusion of price points, or values, for the various toys. Not only does this fluctuate consistently, rendering it obsolete before the book probably even shipped, but it also very subjective. Values are always and only determined by what someone else will pay for it.

I bought a lot of G.I. Joe figures in 2018, the year this book was published, and I can attest personally a lot of these prices are way off from what I paid - In both too little or too much.

Basically what I'm saying is that this aspect of the book is useless. Space filler. A waste of time and ink. Much more useful and fun information would have been the inclusion of the text from the file cards - Or just the file cards themselves.

Additionally, with all the photographs in the book, it's a glaring omission to not include all of the cardbacks and boxes. These were some great pieces of art, sometimes better than the toys within. 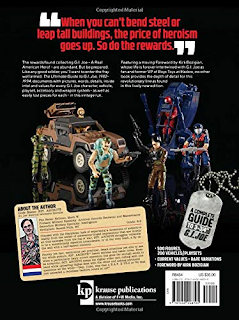 While it's been a while since I thumbed through the first and second editions, I dare say none of the photographs may have been updated, but I can't confirm. This aspect is where I still have one of my two biggest gripes with Mark's work. It's sloppy and inconsistent.

Great care seems to always be taken of the figures, ensuring pure white background to showcase all that wonderful paint and detail, plus an overall "clean" look to the book. However, the vehicles and playsets, once again, are neglected - Sporadically anyway. The grey boxes surrounding some of them detracts from the book, adding a layer of laziness and sloppiness to it. Not only that, but some photos are noticeably blurry. The ones of the U.S.S. Flagg standing out among them.

Does it affect the overall presentation? Absolutely. If you're going to take the time to meticulously crop the figures and some of the vehicles, then do the same for all of them. As for the blurry ones, that's just a lack of quality control, and dare I say it, care. Maybe it's just me, but take some pride in your work. Especially if you're charging people for it. Don't halfheartedly do it.

My last, and biggest gripe with this book, takes us first to the Youtube page of formbx257. In his video review of the second edition, Kevin mentions several errors he's found in the book (video below). If you read the comments, apparently Mark Bellomo even watched said review, commented on it, yet did little to nothing to correct his errors in the third edition.

It all comes back to sloppy and lazy work. Much like Kevin, I don't envy the time and effort Mark initially put into this book. I know it's a lot of work. However, you know there's errors from your prior edition. You've acknowledge them. Yet you blatantly ignore the majority of them and then release another printing of the book? Am I the only one who sees a problem here?


Formbx257 went into greater detail of yet even more errors he found when posting his predictions video of the third edition (video below). These errors too were not corrected upon the books release.


It's because of these unfixed errors that I wouldn't recommend this book to collectors who are looking to utilize it for accurately accumulating their own G.I. Joe toys. It's going to lead you astray if you're looking for complete items. If you're looking for an alternative reference guide, I would point you towards Yo.Joe.com, or the videos of formbx257. While the latter doesn't necessarily cover everything, what you will get with each video is thoroughness. Plus, both sources are free.

Look, I get it. Mistakes get made, errors happen. In the world of writing these end up on the printed page. However, use the opportunity of a new edition, especially in the case of a book such as this, to address and correct those errors. You are after all touting the book as the "ultimate" guide. Not very ultimate if other collectors are pointing out errors to you that you're ignoring.

Click "HERE" to go back to the home page. For more posts related to this one, please click the labels below.
Posted by The Toy Box on January 02, 2020
Email ThisBlogThis!Share to TwitterShare to FacebookShare to Pinterest