I talked about Super Impulse's World's Smallest G.I. Joe figures originally in my post from last week, and was able to finally track down a set of my own. Let me tell you, if the pictures were as exciting for you as they were for me, it was nothing compared to actually holding them in my hands.

These tiny Joes are incredibly awesome! They burst with nostalgia and fun. The detail to attention which was given to these clearly displays a labor of love and respect of the original 1980's Hasbro line. It's amazing how much effort went into such little figures which stand no higher than 1 1/4 inch.

For now, there are only three - Duke, Roadblock and Snake-Eyes, all based on their original V1 iterations. Of course, I'd be lying if I said my fingers weren't crossed tightly with the anticipation for more. I'd be ecstatic if Super Impulse released the entire line of 80's Joes in Smallest fashion. I'd love to display them all in front of their 3 3/4 counterpart in my toy room. 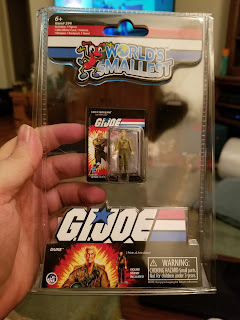 Each figure comes sealed in a plastic bubble and features all of that great artwork you're familiar with from the vintage line at the bottom of the package. 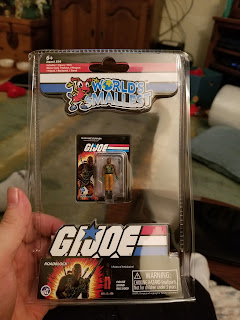 It's because of this that it was actually very difficult for me to open these. I was torn between my desire to keep the plastic packages intact for display and my fascination with the even smaller cardback inside. 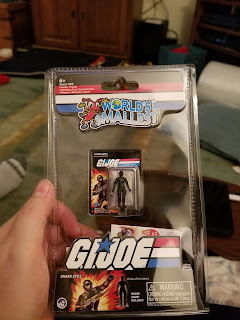 As you know, I'm a big fan of opening my toys, and because of this, that's exactly what I ended up doing - Almost immediately. The urge was just too great. 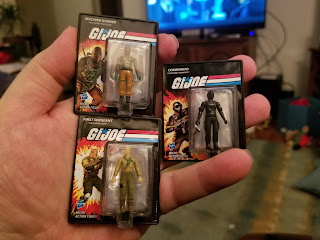 Ever held three carded G.I. Joe figures in the palm of your hand? You can with these. 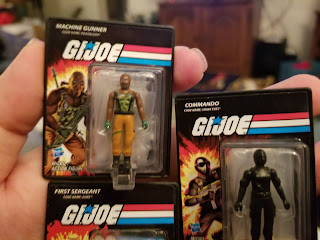 As mentioned in my prior post about these, the cardbacks are actually plastic with acrylic bubbles. This not only makes them durable, but also gives them the ability to stand up straight on their own. Another convenient and well thought out inclusion is the clasped door on the back which give you access to the figures inside, as well as, their accessories. While I took a look, I didn't actually end up removing any of the contents from their packages. I didn't want to risk losing them. 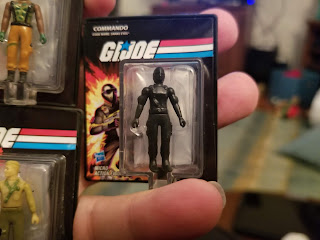 All of the figures come with a nice assortment of items, but I'd be lying if I said they were all accurate to the original releases. For the most part they are, but there are some differences. For example, Duke's backpack is actually Dusty's and he's missing his binoculars. However, said binoculars can be found packed in with Snake-Eyes. As for Roadblock, his gun tripod doesn't attach to his backpack like it does with the 3 3/4 version. These are minor flaws, and don't detract from the overall enjoyment of the figures. 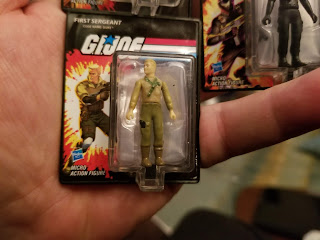 Another minor grumble is the artwork on the card for Duke. It's unfortunate that this is updated to that of the G.I. Joe Resolute line. It's also odd because Super Impulse clearly had access to the original artwork because they used it for the larger package. Fortunately, the other two match their original 80's cardbacks. 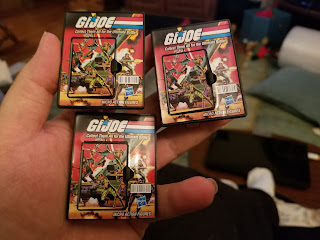 Overall, I'm very pleased with these figures and excited of the prospect for more. I've only recently been introduced to the World's Smallest line of toys, but I can say with all certainly I'll be digging in to more. They have numerous properties which include The Transformers, My Little Pony, Barbie, Mighty Morphin Power Rangers, Hot Wheels, classic games and a slew of Fisher-Price's iconic toys for younger children - Just to name a few. 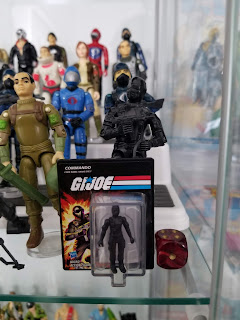 I hope to review many more of these in the very near future.

Click "HERE" to go back to the home page. For more posts related to this one, please click the labels below.
Posted by The Toy Box on January 18, 2020
Email ThisBlogThis!Share to TwitterShare to FacebookShare to Pinterest
Labels: 2010's, G.I. Joe, Review, Super Impulse, World's Smallest