This year, Retro Spins is going to the movies! ...and television! Join me as I take a listen to some of the classic soundtracks of the 1980's! Exclamation points!!!!!!

I remember sitting in a hotel back in 1990 watching Footloose for the first time on cable. I didn't remember much about the film at all after that day.

Fast forward to 2018, and I'm finding a whole bunch of classic movies from the 80's which I have soundtracks for, but have honestly never taken the time to actually watch. Hanging out among this crowd is Footloose. I decide to go ahead and fire it up. 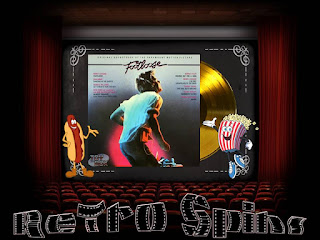 Footloose jumps with spirit, dazzling dance numbers and an electrifying musical score. It portrays the timeless struggle between innocent pleasure and rigid morality, when city-boy Ren McCormick (Kevin Bacon) finds himself in an uptight Midwestern town where dancing-and therefore all youthful joy-has been banned. Ren revolts with best friend Willard (Chris Penn) and the minister's daughter (Lori Singer). A treasury of Top 10 songs-Kenny Loggins "Footloose," Shalamar "Dancing In The Sheets," Deniece Williams "Let's Hear It For The Boy," Bonnie Tyler "Holding Out For A Hero," and the Footloose love theme, "Almost Paradise." - Back cover of the original VHS

Boy, the back cover of the VHS really spells out what you're getting on the soundtrack, doesn't it? In fact, for the most part it captures all of the better songs. The only one it really misses is "I'm Free (Heaven Helps The Man)", another classic tune from Mr. 80's Soundtrack Man himself, Kenny Loggins.

I have to say, I much prefer the soundtrack to the actual film. Not that it's a bad movie, but quite frankly, the music is just that much more superior. People in general love this album. Case in point, I remember driving home from work in the summer of 2018, and as I pulled in the parking lot of my complex, Footloose just happened to be on my iPod. People in the parking lot literally started dancing to it as I pulled into my space. Because of this, I did the only thing I could think to do. I turned it up.

Footloose is a solid and timeless album with so many of my favorite hits from 1984. Footloose (the song), Let's Hear It For The Boy, Almost Paradise, Holding Out For A Hero, Dancing In The Sheets, I'm Free (Heaven Helps The Man), Somebody's Eyes and Never are all staples in my iTunes 80's shuffle and on my iPod rotation. They all take me back to a time where things were so much happier, innocent and fun in my life.

Click "HERE" to go back to the home page. For more posts related to this one, please click the labels below.
Posted by The Toy Box on January 07, 2020
Email ThisBlogThis!Share to TwitterShare to FacebookShare to Pinterest
Labels: 1984, 80's Album Review, 80's Music, 80's Music Review, Footloose, Music of the 80's, Retro Spins