Kidd Video had a short lived life as a Saturday morning cartoon from 1984 to 1985. It followed a fictional band, fronted by Kidd Video, and their journey through The Flipside - a world run by the evil Master Blaster, who initially brought the group here to be musical slaves.

What made the show stand out among the rest of its MTV era audience was the inclusion of pop / rock songs, as well as music videos and clips within and following each episode. Additionally, it featured original songs which were performed by the actors / band members, and full fledged music videos to accompany them. Best of all, these songs were actually great tunes. So great that in fact the fictional band took off in Israel, where a record (and other merchandise) was produced. 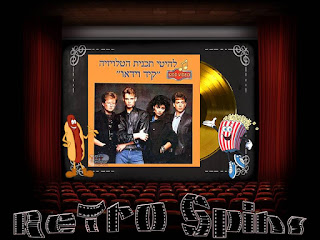 This record to be exact!

Featuring all eleven original tracks from the show, this is the ultimate companion to the series - A series, which to date, has never been officially released on DVD. Sad. Still, I suppose we have the record to enjoy...well, sort of.

As mentioned above, this record was only released in Israel, which makes it a little difficult, and somewhat expensive, to get anywhere else. Copies show up on ebay here and there, but it's going to cost you around $75.00 to $100.00. It's also typically from the same sellers, who have no interest in negotiating the price. I recall when I was first looking for this album, the seller actually told me he had no interest in lowering his asking price, and would continue to relist it until it sold for the amount he wanted. It took me a couple years of coming back around to this record before finally finding it from someone a little more reasonable - Though it was still $60.00.

Well worth it though.

This is a great album. Speaking as someone who watched the TV show as a kid, I couldn't honestly tell you about any of the episodes. The only thing I actually remembered from the series was the music, and I loved it as a kid (kidd?). As an adult, I can appreciate the songs on their own, and find them, actually, quite enjoyable. On par with the music of the 80's, and easily able to stand on its own.

Quality wise, it has its moments of "issues". Mind you, this is by no means a result of the record itself, which is actually pretty crisp, but rather the production of the tracks when they were originally recorded. This is most notable when  S's are sung on a couple tracks. The mic hisses back in protest a little. Detracting, but not a deal breaker, for me anyway.

Personal favorites from the record are, Video to Radio (the opening theme to the show), A Little TLC, Come Back to Me, You Better Run, Turn Me Up and Easy Love. A couple tracks land on the "okay" meter, such as, It's Over When the Phone Stops Ringing and We Should Be Together. I could honestly pass on the rest though. Still, eight tracks out of eleven? That's not a bad ratio.

Click "HERE" to go back to the home page. For more posts related to this one, please click the labels below.
Posted by The Toy Box on January 14, 2020
Email ThisBlogThis!Share to TwitterShare to FacebookShare to Pinterest
Labels: 1986, Kidd Video, The TV Show Hits