Who ya gonna call?

Towards the tail end of its popular 2012 - 2018 line of Nickelodeon Teenage Mutant Ninja Turtles, Playmates Toys produced a series of the fab four garbed up in Ghostbusters gear. Each figure represented a character from the popular 1984 film, and has been meticulously sculpted to capture the actor's characteristic facial features. 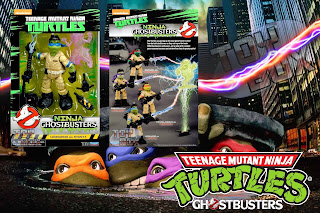 
Standing at six inches tall, these figures are larger than the aforementioned Nick line, which stood at only four and a half inches. As such, they're not designed to be cross compatible. Then again, with their sleek window box packaging and higher price point, perhaps they weren't really aiming for a younger target audience, but rather, the adult collector. 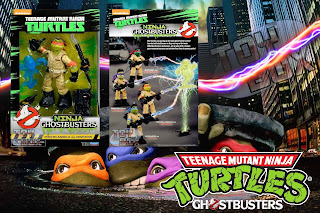 
In addition to the fantastic sculpted Ghostbuster suits, each figure also came jam packed with a slew of screen accurate accessories, such as, Proton Packs (with shooting beams), Ghost Traps, PKE Meters and packed in ghosts to catch. 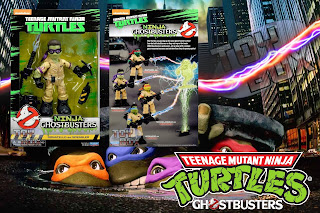 
Though some folks claimed these figures were Target exclusives, I can personally attest to have seen these at other retail chains, such as Toys R' Us. Regardless, you won't find these on store shelves as of 2019. They came and went in a blink of an eye in early 2018. Such is the life of toys released at the end of a line's life cycle. 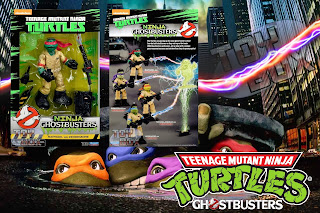 On average, these figures go for about $30.00 each these days, which isn't bad considering their original $20.00 retail price point. They're not bank breaking just yet, but who knows what the future will bring.

Click "HERE" to go back to the home page. For more posts related to this one, please click the labels below.
Posted by The Toy Box on September 23, 2019
Email ThisBlogThis!Share to TwitterShare to FacebookShare to Pinterest
Labels: 2010's, Ghostbusters, Playmates Toys, Teenage Mutant Ninja Turtles, TMNT