"I pity the poor fool who don't eat my cereal!" - Pee-Wee Herman.

Despite appearing as the infamous Clubber Lang in Rocky III, which only served to boost his popularity as a household name, Mr. T was seen as a kid friendly persona. His moral compass always seemed permanently pointed towards being good, while at the same time, being strong of the body, and willing to stand up for yourself and others. This image was only solidified with his appearances on shows such as Silver Spoons, Diff'rent Strokes and Alvin and the Chipmunks - Not to mention his own self titled popular cartoon series.

Mr. T cereal was by no means my favorite as a kid. Even as I type this post, I can taste that awful aftertaste these sweet corn and oat pieces left in the back of my throat. It's very similar to that of Cap'n Crunch, also one of my least favorites. However, this didn't stop my from slamming bowl after bowl of these "T" shaped bits which seemed to never get soggy in milk.

The back of the box featured a short paneled comic strip, which featured the characters from the animated series. In fact, the front of the box, which shows Mr. T, was also the design from the cartoon. This would be, of course, because the cereal came about based on the cartoon. 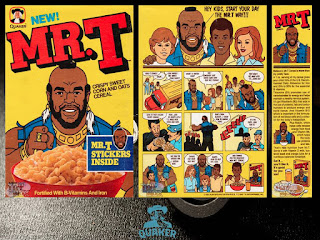 Inside each box, kids could find one of three sheets of stickers. You guessed it. Those stickers featured the characters from the animated show. 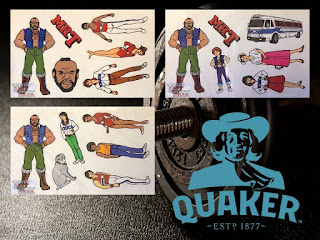 Though I wouldn't rush to have a box of Mr. T cereal these days, for what it's worth, it remains one of my all time remembered cereals from my childhood. Maybe it's because it reminds me just how much of it I ate, but at the same time didn't necessarily like. Perhaps it's just because it's Mr. T. Whatever it is, I too pitty the poor fool what didn't eat Mr. T cereal in the 80's!

Click "HERE" to go back to the home page. For more posts related to this one, please click the labels below.
Posted by The Toy Box on September 16, 2019
Email ThisBlogThis!Share to TwitterShare to FacebookShare to Pinterest
Labels: 1980's, Cereal, Mr. T, Mr. T Cereal