After my trip to Farpoint Toys, I immediately made my way to The Comic Book Shop for my second trip. It was kind of disappointing.

The only changes which seem to have occurred since my last visit is that they have less stuff. It doesn't look like they've restocked at all. Mind you, it didn't stop me from taking photos.

Why is it both times I've been here there's been someone in front of the shop blocking an otherwise perfect picture?

As I mentioned in my post yesterday, I picked up the Soaron in this cabinet to replace the broken one. Too bad they didn't have a Blastarr.

They still had the same two Bravestarr figures from last time.

Pickings were slim, in terms of what I was looking for, in the Joe case. However, if I was just now getting into the line, these would be some great "first" figures.

I would have considered getting the Ewok Village, but it was missing pieces.

In terms of purchases, I came nowhere near close to what I got from Farpoint. Still, I got some decent stuff. 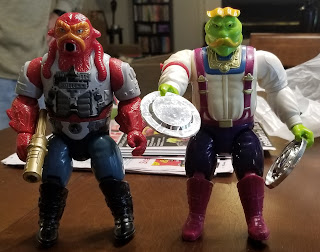 It took a bit of negotiation to come to an amicable price on Sand Storm and Handlebar. I wasn't going to pay much for them, and the shop owner needed some convincing that he'd been holding onto them long enough as shelf warmers. They had been there, and considered for purchase, during my first visit back in October. 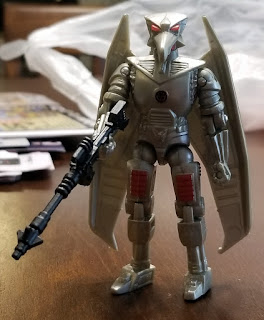 As I've mentioned a few times, I replaced my Soaron Sky Sentry. 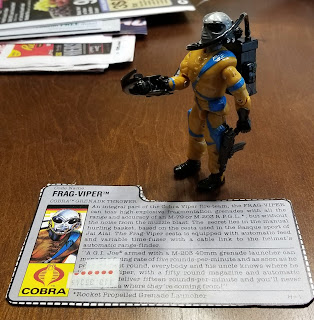 Frag Viper was the only Joe figure I ended up getting. If I were "desperate" to get more, I suppose there were others I could have grabbed as well. 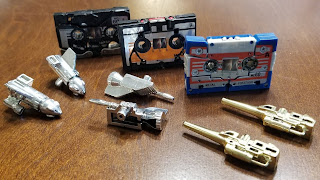 I'd like to collect more of the G1 Transformer cassettes, but they're not very reasonably priced. Truth be told, I only got these ones because I was willing to spend a bit more than what I had gathered above. Don't get me wrong, I like them a lot. Just not their price points. 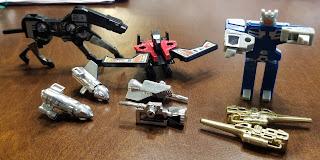 That wrapped up my trip to The Comic Book Shop, and quite frankly, I'm not really excited to return to this place. Based on the lack of replenished merchandise, I don't feel like I'm going to be missing anything by passing on it for an extended period.

Click "HERE" to go back to the home page. For more posts related to this one, please click the labels below.
Posted by The Toy Box on June 15, 2019
Email ThisBlogThis!Share to TwitterShare to FacebookShare to Pinterest