T'Pau was on to something with their song Heart and Soul. The duel lyric-ed masterpiece was so unique for its time and was like getting two fabulous songs in one. The track was destined to be a hit and this thought was backed up by how it hit the charts in May of 1987 at number ninety-one and flew all the way to number four by August of that same year.

The album Bridge of Spies hits you square in the face with Heart and Soul as the opening track, gets you really excited for a powerhouse album and then delivers a plethora of mediocre at its best. By track three I was bored with the album. By the time the album trudged through to the end I had essentially tuned it out. 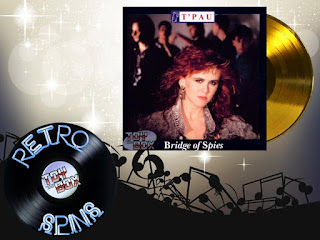 The words generic, bland and...Well, mediocre and boring definitely ring through Bridge of Spies. Apparently I was not alone in this line of thinking as not only was Heart and Soul the only hit for the band from the album, but they were essentially never heard from again - Despite releasing follow up albums in 1988 (Rage), 1991 (The Promise), 1998 (Red) and the most recent, 2015 (Pleasure & Pain).

Sounds like a pretty bad album / band, huh? Well, don't count T'Pau out just yet. The title track, Bridge of Spies, rolled around (track six to be exact) and suddenly the album grabbed my attention. It then lead into the next track, Monkey House. It was like I was listening to a whole new album. Where did these songs come from and why weren't there more of them like this? High energy, great riffs, catchy.

Sadly, this energy didn't keep up and with track eight, Valentine, I was right back to that generic / bland sound. This in turn caused me to once again lose interest. This mediocre pace of tracks fleshed out the remainder of the album.

While I wouldn't necessarily recommend this album to anyone, I will say this; it's going to cost you less to buy the album than an actual single of the song Heart and Soul. You can grab the full album for as little as ninety-nine cents, while the average cost of the single is around three bucks. Plus, the tracks Bridge of Spies and Monkey House are definitely worth the one dollar buy in price.

Click "HERE" to go back to the home page. For more posts related to this one, please click the labels below.
Posted by The Toy Box on June 11, 2019
Email ThisBlogThis!Share to TwitterShare to FacebookShare to Pinterest
Labels: 1987, 80's Album Review, 80's Music, 80's Music Review, Bridge of Spies, Music of the 80's, Retro Spins, T'Pau