I don't touch much on WWF or wrestling in general around here at The Toy Box. In fact, the only toy line I've talked about in the past was Hasbro's 1990 to 1994 WWF figures.

Despite this, there is still a lot of fond memories in the back of my mind from the 1980's / early 1990's era of wrestling I used to watch as a kid. Hulk Hogan, Macho Man Randy Savage, Andre the Giant, Ultimate Warrior - These were my wrestlers. True American heroes or villains battling it out in the square circle every week, all leading up to the annual pay per view Wrestlemania.

At this point there have been so many wrestling toys produced that I will probably never touch on many more of them. Mainly because I simply don't know the players these days. However, I still get that nostalgic giggle when I see something from the 80's with all those familiar faces.

Multi-Toys WWF Power Grip Squirts and Squirt Heads line was by no means meant to scratch the itch of action figure collectors. Instead, it was a unique way to have water gun fights in the backyard.

It all starts with getting your hands on a Power Grip Squirts. These could be obtained in one of four different styles; Hulk Hogan, Ultimate Warrior, Macho Man Randy Savage and / or Jake the Snake Roberts. While it was important to pick the one which best suited your favorite wrestler needs, this was by no mean limited because the heads were interchangeable. 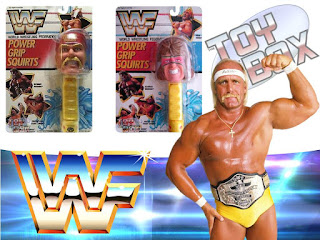 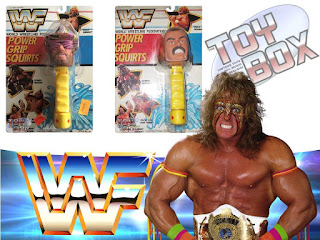 
There were numerous heads made available which meant there was really something for everyone. Sure, not all the classic characters were there, but with twelve different heads to choose from, there were enough to keep you collecting and playing for hours.

Now instead of running around the year shooting each other with water guns, you could instead run around shooting Hulk Hogan in the face with The Million Dollar Man! The combinations while not limitless were still in abundance. 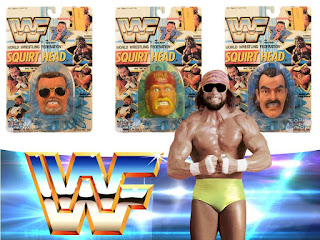 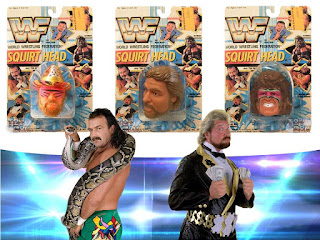 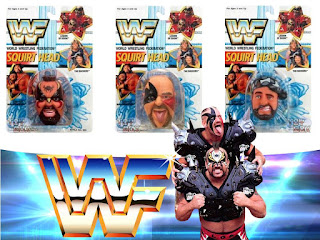 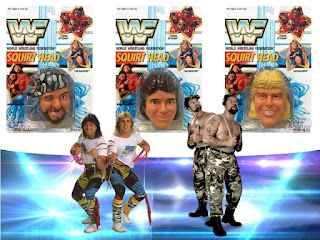 The various heads can be a bit of a challenge to track down these days. While some are far more common than others, there is oddly not much of a price fluctuation between them. On the card you can grab them for around ten to fifteen dollars each. The Power Grip Squirts however are going to set you back around thirty if you want them on the card. Ten if you're fine with loose.